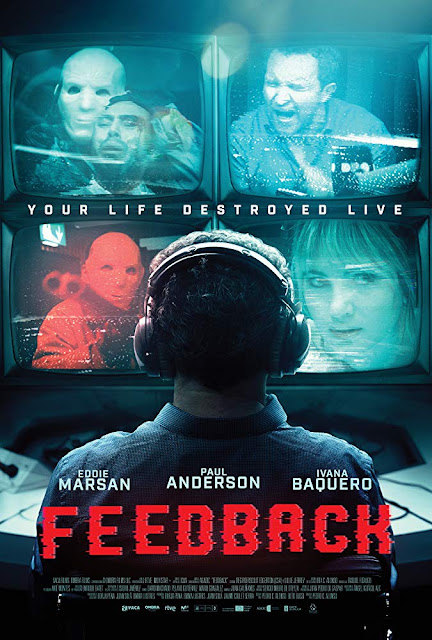 I am having a frankly terrible evening, I won't bore with the details, but it ended with me returning home to find my review of Feedback I had spent forty five minutes writing earlier in the day had straight up vanished, apparently it hadn't saved when I had clicked on the 'save' button. So this review is a re-write from memory. Luckily though I feel this review is a better written one than my first.
I liked the idea behind Pedro C. Alonso's Feedback, it sounded to me quite similar to Truth or Dare with the way a captured person was forced to reveal their darkest secrets at pain of torture (it reminds me far more of a film that was set on a small plane I reviewed many years back, can't for the life of me remember what that was called). I was also quite happy to see a few actors among the cast who never fail to make any film they are in immediately at least a bit better.

Jarvis (Eddie Marsan - The World's End) is a famous London based radio presenter who against his boss's wishes (Norman, played by Anthony Head - Repo! The Genetic Opera, Buffy the Vampire Slayer TV series) is going to do an expose on outside interference into the Brexit referendum. He goes on air, but just as he is planning to do this things start to go wrong. Initially Jarvis suspects Norman is interfering but he soon finds out that the studio has been invaded by two masked men (one of which is played by Richard Brake - 31, 3 From Hell). The duo want Jarvis to carry on his radio show as normal, but to speak about exactly what they tell him to, with their aim seeming to be to get him to talk about an incident he was part of that took place some ten years previously...

While the story was enjoyable enough an idea on its own it really became a lot better due to the quality of the actors here. To be honest I don't think it is possible for Brake to put in a bad performance and here I really liked his acting. While one of the masked villains was all rage and aggression, Brake's character was far more measured, and even kind of reasonable. I enjoyed this shifting of expectations, and he gets some good moments. It was also nice to see Marsan in a leading role, having previously only seen him in The World's End. His character on the surface is a mild mannered, yet opinionated cockney but beneath the surface lies an aggressive and self centered streak that Marsan is great at showing. I did think this character wasn't treated the best in terms of the plot, there were some bits that felt a bit off towards the end. The film only has the seven characters, but thankfully nearly all of them were enjoyable, just one character who to me felt a bit cliché and unbelievable.

The entire film takes place in a radio station, and a good 90% of that takes place in the isolated studio. In some ways this reminded me of Phone Booth, in that Jarvis is forced to constantly be on the radio. It is established early on that there is a time delay between what is being said and when it is going live on the radio. This concept is put to some good use but it also allows much of the movie to take place outside of the 'being on the radio' part, with the producers backstage seemingly forced to insert lots of pre-recorded audio. This nullifies some of the tension of these dark secrets getting revealed live on air, and also means there isn't much interaction with the outside world outside of a Twitter feed that is occasionally shown, this felt like a bit of a missed beat as the only people who phone into the show are the intruders themselves. It is a simple set up for the plot, and I did enjoy it, but I was left with quite a few logic gaps that I don't recall the film explaining away. It felt very of the moment, dealing as it does with dealing with fame, and of course including aspects that the #metoo movement has been exposing. I did like that while what the intruders are doing is very wrong, their motivations might actually be far more relatable than at first appears, and that Jarvis, or at the very least the people he has worked with might have some pretty dark secrets tucked away.

I expected, like Truth or Dare there would be a lot of grisly torture to see, and Jarvis doesn't get away scot free, but mostly it isn't him in peril, but rather outsiders, like his producer Anthony (Alexis Rodney - Guardians of the Galaxy) that are the ones in danger should Jarvis not do as instructed. There are still plenty of moments of violence, a character nearly has their finger cut off by a pair of scissors at one point, and a sledgehammer one of the intruders wields is put to bad use plenty of times. Special effects are minimal, but look decent when they are used, such as shotgun blasts, and the trauma that is caused on the studio itself over the course of the movie. This is all backed up with crisp directing and a plot that unravels at a pace that kept the tension high, and interestingly includes a neat little nightmare sequence that really got me confused at the time.

I had a feeling once I started recognising the various actors that Feedback would be a lot better than I initially thought it might be. I have seen a similar type of story told many times before, but with such a strong cast it got elevated here. To be honest though, with Brake in such a large role here I don't think it would have been possible for me not to enjoy this. Feedback comes to DVD on 18th February thanks to Breaking Glass Pictures.

Posted by Daniel Simmonds at 05:15