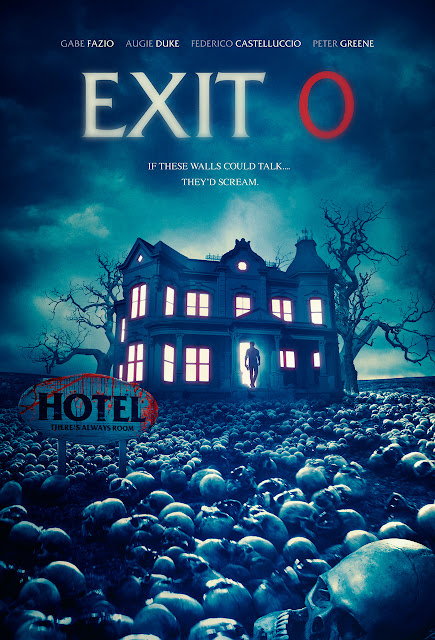 The brief synopsis I read for E.B Hughes (Turnabout) Exit 0 made it sound quite interesting, and so I was hoping for a good film to pass the time with. Sometimes leaving a story ambiguous can really help make it stick in the mind as something clever, but sometimes it makes for a movie that feels at its worst a bit of an undecided muddle.

Billy (Gabe Fazio - A Star is Born) and his girlfriend Lisa (Augie Duke - Bad Kids Go to Hell) have gone away on a weekend vacation to a hotel that Billy had fond memories of visiting as a child. The night they arrive he discovers a VHS cassette tape under their bed, and playing it he is shocked to see it appears to show filmed footage of a couple being killed in the very same room him and Lisa are staying in. Not wanting to alarm her, he decides to keep this to himself. 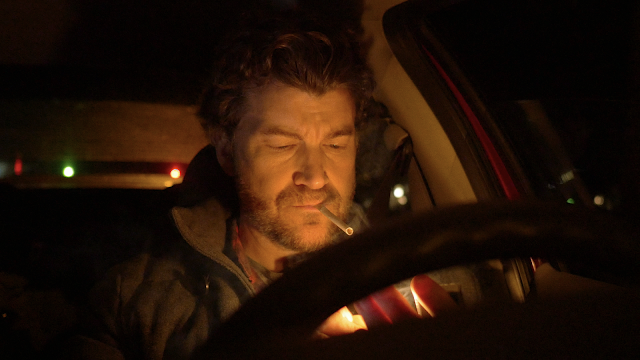 I felt that there were enough threads of plot here to make what is happening unite into something thrilling. However these plot threads never really ever come together. There is a vain attempt to do so, yet this only occurs with less than ten minutes of film time left, and so fails. As well as the tape Billy discovers, there are also possible supernatural goings on at the hotel, with it being suggested by a local that it is haunted. There is also the suggestion that there is a plot by the locals to harass and threaten Billy, either to kill him like the people on the tape, or to scare him out of town. There is also the suggestion that Billy is mentally unwell, with his girlfriend admitting to a detective that he takes medication, but doesn't reveal what it is for. All these plot points would have been grand if something had come of any of them. As it is, there just isn't enough revealed about anything to make these into anything. The film finished and I was none the wiser if much at all had actually happened, there didn't seem to be any clues to point to any type of a resolution.

Where Exit 0 does succeed though is with portraying the deteriorating relationship of Billy and Lisa. Initially I thought the two actors had zero chemistry with each other, but a key conversation in which Billy admits to a writer he meets that he doesn't know if he loves Lisa or not explains this lack of chemistry. The couple are awkward with each other and always seem to be in different places emotionally, such as when Billy wants things to get intimate, but then Lisa heads off to take a long bath. Then later when she is back it is Billy who is not in the mood. Billy was a really weird character, and one which I couldn't tell if Fazio was playing the role for laughs. At times with the way Billy irrationally acts I felt Exit 0 was meant to be a dark comedy. This can be seen in such moments as Billy's silent rage scream he does after failing to get the hotel night clerk to do something for him, that part made me laugh out loud. The character is not someone you can identify with, this becomes clear right away when he has a go at his girlfriend for constantly being on her mobile phone, when it is him who is the oddity by not owning a phone. He is constantly weird with everyone he encounters, and acts overly paranoid for little reason. There some elements to suggest he might have a tragic connection to the couple killed on the tape, again this suggestion is just a suggestion. 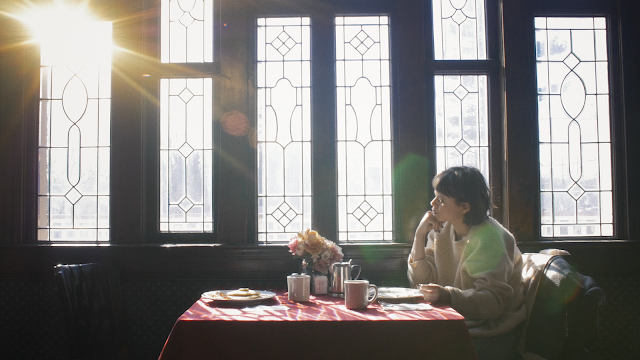 Exit 0 is filmed competently, and gets away with no need for any special effects. Including among its arsenal is a found footage style section that was filmed and edited well, seemed authentic enough. There is also a nightmare sequence that was the most action packed scene in the entire film. Outside of those moments there isn't really a lot that happens, the film seemed to fly by, so in that respect it worked well, I never once felt bored, but I couldn't help but clock watch and realise it was swiftly running out of time to finish telling its story.  Locations looked nice enough, and this had a good supporting cast to back up the protagonists.

I was left a bit conflicted about Exit 0, I felt that it should be a good movie, but I couldn't quite work out why but there was something about it that stopped it resonating. In terms of the filmmaking and actors there was nothing wrong here, I just didn't find the story, or specifically how it was told to be something I particularly enjoyed. Exit 0 is due to be released by Breaking Glass Pictures on 10th March.