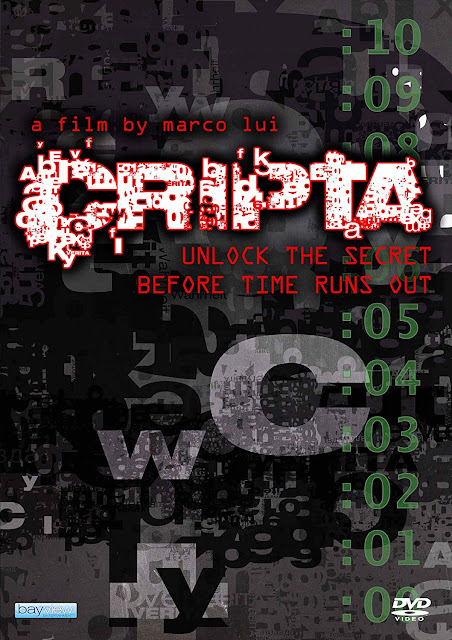 Being slightly hungover on a Sunday I sat down to watch Marco Lui's Cripta, which I had assumed was a horror film. By the zany style and very low stakes it soon become clear this was something aimed at teens, and that to be honest it isn't horror. This is edutainment dressed up as a film, it is also a religious film, while not preachy at all, it does assume that the teachings of Christianity are true.

Cripta centres around six teen archaeology students who study their topic via web cam sessions with their professor. One day they sit down to do their class as usual but are instead met with a stranger. He informs the teens that their professor has been kidnapped and that if they want to free him they must play a game. So far so Saw. The intruder displays his powers by hypnotising the boys and manipulating the emotions of the girls, then he warns them if they fail the game they will die. The game is based on religious dogma, and centres mainly on the idea of baptism.

I guess it was good timing that I ended up watching a religious film on a Sunday. This is in Italian with English subtitles. Due to the subject matter it was quite hard to keep up with what was being spoken about, even in English that would have been hard to follow. The subtitles are ok, though on many occasions the subtitles seemed slightly wrong, and so I had to rearrange words and spellings in my head for them to make sense. I seem to remember one example being 'flash and bones' rather than 'flesh and bones'. This was nostalgic in a fashion as it reminded me of being back at school watching those programs that try and make the learning fun, as I said in my intro; edutainment.

As this is a horror blog I shall try and rinse some scary moments out of this. It was clear within the first twenty minutes this wasn't a horror, but I felt locked in by that point so I continued. The only sense of peril is that the professor has been kidnapped, and that the intruder (a schizophrenic loon who gave off vibes of The Riddler) demonstrated actual powers he had. Initially I felt this might be like Unfriended, but of course it is not. What is being shown as fact is very abstract. For instance most the rounds in the game the teens are playing have a time limit of just two minutes. Yet on nearly every occasion the real world time exceeds that limit. A lot of the movie either has shots of the teens sitting in their rooms, or what the PC/Laptop screens are showing, but this is quite ethereal as it shifts between shots of all the teens on screen, individual teens taking up the whole screen, Google searches, the game the intruder has forced onto their screens, as well as a whole variety of religious scenes filling up the whole image. I don't think the viewer is expected to believe any of these are what is actually being shown on the screens.

Onto the acting then. Being in Italian it is hard to tell how good or bad the characters are. I did think both the professor and the intruder where good, they had a life and energy to their over the top performances. The teens all come across as nerds, but within them they have a few stereotypes, such as the bookish girl, the goth girl and the joker (not The Joker, I mean a more laid back light hearted one. With the majority of the film being the teens working through the different theological questions it wasn't the most exciting. The only hook I had was if this was suddenly going to explode into a dark and twisted horror, and what was going to happen at the films conclusion.

Cripta at its best was something very different to anything I have seen since my school days. Some of the religious stuff being discussed was interesting, but with the questions taking up most the film I did wish there was some other things going on, maybe the teens secretly trying to work out how to defeat the intruder rather than play his game. As it stands it is hard to recommend this movie, unless the idea behind it sounds interesting, going in with clear expectations will only improve this one. Cripta is available to purchase on DVD thanks to BayView Entertainment.

Posted by Daniel Simmonds at 12:17