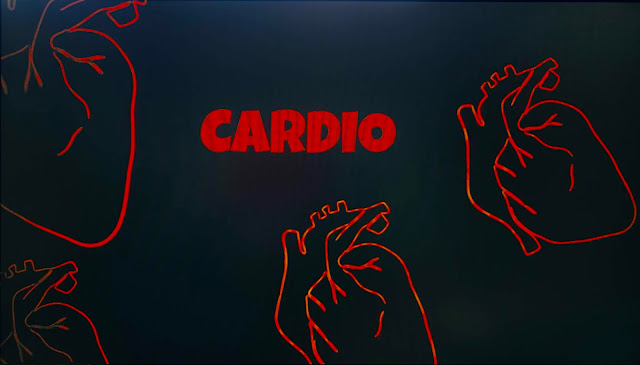 Cardio is a short three minute Czech horror that comes from director Petr Cerny. Over the course of its short run it takes in a few different styles, including animation. There was a lot stuffed into this one.

A man is working alone at a warehouse on his birthday, and has arranged to meet his friend after work. After finishing the call he notices there is a figure dressed all in black. Each time before he can properly see who the intruder is the lights all go out. he discovers there are two masked figures who keep moving around him each time the lights go out. Despite being quite unfit the man decides to try and run away from the two.

The first forty seconds of this are the strangest, with a phone conversation that plays out over a yellow smiley face. It was a strange start but sets up the fact the protagonist gets irritated by people who fall for fake news. What follows is slightly more traditional section where the man is toyed with by the intruders which begins his flight from them. The best part is the end, I really enjoyed how the last third plays out, and how it ends on a beat that merges the real into the cartoonish with the animated end credits. This was edited really well, both with how the music feeds into the editing, and the fast paced stitching together of disparate shots and inserts.

While I did feel the middle part of Cardio bit uneventful it all makes sense by the end, once everything is explained I felt the need to re-watch this several times. That ending is something I kept going back to, really was some neat stylistic choices there.