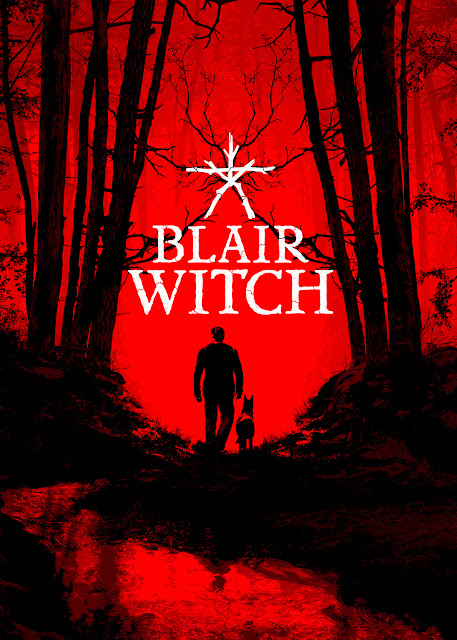 Blair Witch is a first person survival horror game that takes place in the iconic Black Hills forest from the films. Back when The Blair Witch Project first came out there were a series of apparently terrible video games released, what I recall of them they had you fighting monsters made out of sticks. I wondered then how this latest game would fare any better, after all the frightening aspect of the films comes from not knowing what the threat actually is, so in a game setting that would also need to happen, but it wouldn't make for much of a captivating game. I had high hopes for Blair Witch having liked the trailer for it, but could it manage to create a layer of fear?

This takes place in 1996, two years after the events of the original film. You play as a former police officer and veteran called Ellis Lynch. Along with your dog Bullet you travel to the Black Hills forest to help with the search for a missing nine year old, Peter Shannon, who went missing in the area. The main search party have already headed in, so you decide to try and find them, but along the way Bullet picks up clues that the main search party missed, and so you head off alone to follow up on these clues. This begins a nightmare in which Ellis is forced to confront the demons from his past, as it seems some nefarious force is determined to stop you from finding the boy. 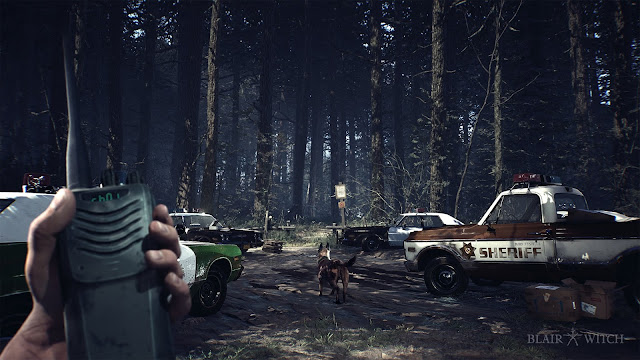 At times this felt more like a walking simulator than survival horror. A lot of the game has you, along with your dog walking around the forest, solving gentle puzzles as you go. This game takes a lot of its inspiration from the latest Blair Witch film. While that movie wasn't great it did have some decent ideas revolving around how the forest messes with your perception of time and space. Going with this a lot of the progress between 'scenes' involves time shifting around. You can, say look at an item on the ground in daylight, then look up to find it is now night time. The night time sections feature a lot more horror and danger as you would expect. This use of time also applies to objects you see within the game. For example stumbling across the rusted remains of a old truck you later return to see the truck now looking relatively new and in full working condition (this idea in the film series is first shown in the wonderful Book of Shadows: Blair Witch 2) . Another example was one part of the game when you are in the same location as another character you are talking over the radio to, but seemingly at a different time, like what they did in the Silent Hill films.

Having a forest as the location for a game doesn't sound like the most interesting location, and this is a game where a good 75% you will be in forest locations. There are a few additional areas that pop up, such as the ruins of an old lumber yard, and of course the iconic house from the films. That area was obviously going to make an appearance and you spend a good chunk of time there thanks to a P.T style mechanic that sees you repeatedly walking through the same rooms but with different things happening each time, also of course a mechanic used heavily in Bloober Team's (the developer) other horror game; Layers of Fear. Inspired by Blair Witch (the film) the house shown has a design more in line with that, such as featuring a crawl space under the basement for instance. Even when you are out in the forest there are some varied moments. For the general puzzle areas you will get in a medium sized patch of forest that loops around on itself. One part has you at a campsite, whichever exit you take will eventually take you right back to the campsite. This helps in keeping you focussed on what you are meant to be doing, but is also in keeping in line with the lore of the movies, such as with the first film where the trio discover they seem to be somehow walking in circles. 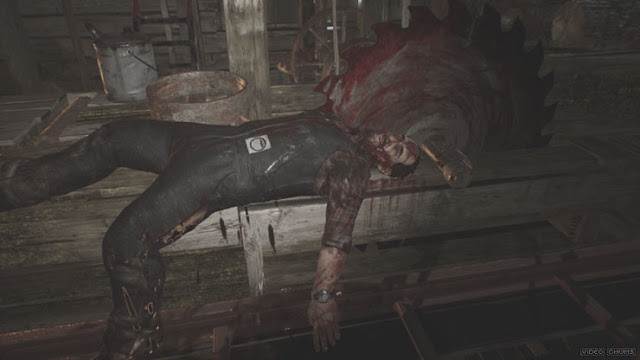 So, what do you actually do in this game? Well, you are equipped with a flashlight, a radio, a camcorder, a mobile phone, and your trusty backpack. You will be often in communication with various characters on the radio, such as Sheriff Lanning. Your mobile phone has you mostly calling and texting your ex-wife Jess, but also amusingly has a few old school mobile phone games on it, such as Snake. The gameplay mechanics revolving around working your way through environmental mazes, such as using the camcorder's night vision to follow trails on the ground, or following the instructions of a voice on the radio to avoid hostile threats. Dotted around the game also are camcorder tapes, these shed some light on the story, and also allow you to alter the environment around you. One example is watching a tape in which a tree falls over and blocks a pathway. If you rewind the tape to before the tree fell over that pathway in reality will also now be clear. There are also quite a few stealth sections in which you have to use the camcorder to weave a path through invisible enemies, this also plays into moments when you are assaulted by nearly impossible to see monsters, they can be destroyed by shining a light at them, and your trusty dog always growls in the direction they are coming from. Bullet plays a big part in the game, you even have a radial wheel with which you can pet him, admonish him, send him off to look for clues, and get him to return to you. He is so important that your treatment of him feeds into one of the possible endings.

Going back to the Silent Hill comparison - the story here is very much one that would fit in that series. It becomes clear early on Ellis has his own personal demons. His journey leads him to force himself to confront those demons. A lot of this comes out as PTSD style nightmares in which his time in the military merges with the present. So, you might suddenly start hearing gunfire, see middle eastern looking architecture, or hear conversations from your past. Sadly the story here wasn't the most interesting. I was far more interested in the search for the missing boy, but as Blair Witch goes on that story fades away into the background, with Ellis's dark history becoming the focal point. All very Silent Hill, but I found the first third of the game to be a lot more involving when the story was less about the protagonist. This is a dark game in more ways than one, and to be honest I found some parts, especially towards the end to be so dark as to be frustratingly so. Sure it can be scary to be in pitch black with unknown things happening around you, it can also be damn annoying when you have literally 1% visibility. This led to me getting really stuck at some points as I strained my eyes to try and work out where on Earth I was meant to be going. On the flipside this does a decent job of not appearing linear at times, the areas you are in are often wide enough that it takes some walking to brush up against the invisible walls. 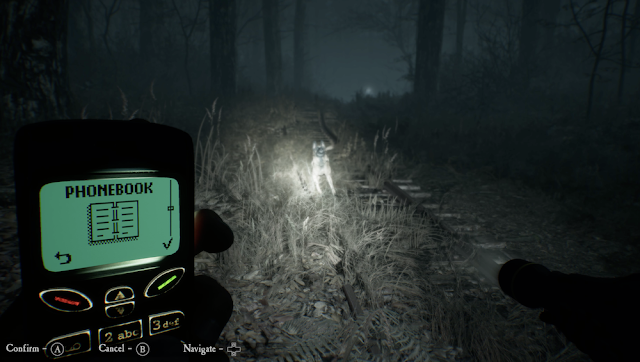 Blair Witch was a game that I was glad I got to play, and it offers up enough in the ways of variation and scary moments (some great sound design here also). However there were some elements I didn't enjoy so much, such as the personal story of Ellis taking precedence over the initial one, and too many annoyingly dark areas. I also didn't like that the game offers up an antagonist (that felt very much like the one from Condemned: Criminal Origins) as he just felt very out of place and kind of stupid looking. There is plenty of fan service here, from the iconic stick figures, to the iconic house (where you even have to stand in the corner facing the wall at one point). When it was all over I wasn't satisfied, the underwhelming story ends on a damp note. There are a variety of different endings depending on your actions over the course of the game, but that wasn't enough incentive for me to feel like playing it over again.

UPDATE (28/01/2022) - There is now a VR version of this game out, that is something I wouldn't mind trying out, everything typically seems more scary in VR.
Posted by Daniel Simmonds at 15:37