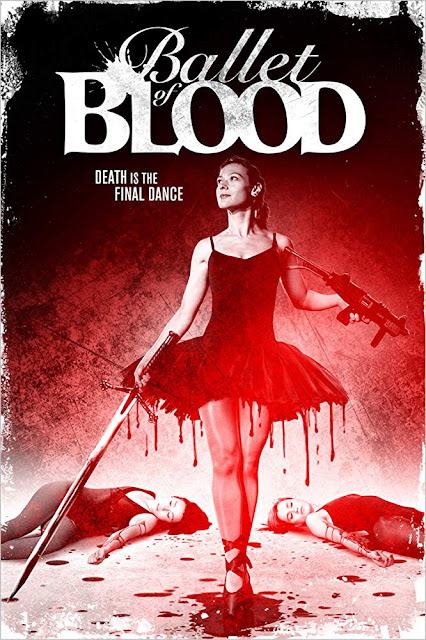 Ballet of Blood is an exploitation horror throwback film from director Jared Masters (Amethyst, Slink). The budget is low, the special effects minor and the plot mostly barebones but then that does appear to be the intention. It helps create a modern day movie that displays the film making sensibilities of decades past.

This takes place mostly in and around a ballet school and follows a group of ballerinas after an attack by an uzi toting ex-pupil; Nisa (Sydney Ray - Lake Fear 2: The Swamp). These students include among them bookish Maren (Marla Martinez) who decides to write a novel based on the incident. Wanting to keep the attack hidden away from the media, the school's owner gets the girl who is suspected of supplying the gun to Nisa; Ria (Jesse Aaron) put in a psychiatric hospital. Eventually Ria teams up with Nisa in order to get revenge on those they see as wronging them... 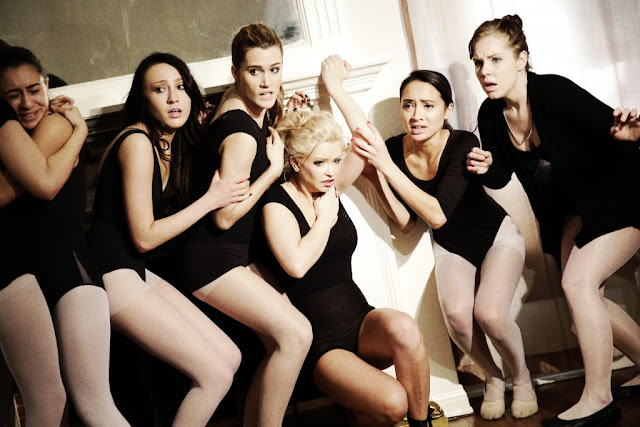 This movie isn't going to be for everyone, and so going in to this expecting a traditional way of filmmaking and storytelling you may come away disappointed. I had a good idea of what this would be like and it actually wasn't as wild as I figured it would be. That isn't to say it failed to live up to my expectations, there is plenty of murder, and lots of blood. Roughly two thirds of this 98 minute film follows the various girls as they go about their daily lives at the ballet school. As vapid as some of these characters appear to be they all have hopes and aspirations even if they are mostly self obsessed and judgemental people. Maren is the innocent face in all this and so became the most identifiable character here. There was some nice moments with her story with the lines becoming blurred over if what is happening is reality, or if it is all part of the novel she is writing. This becomes more overt towards the end where she and other characters talk about the actions they should take based on what Maren has previously written.

The final third of the movie is both more action heavy, but also more dream like and even arthouse in how the story is told. There are many contrasts between characters dancing in unrelated scenes and the plights they are actually experiencing. Such as one character shown to have marionette strings attached to them to signify them being controlled. There is even one death sequence in a bathtub that has the victims playing around with each others blood rather than actually die. Some of these scenes were quite interesting to watch, one with a girl dancing with a snake for instance, and other that had a girl dancing at the end of a long cave while hooded figures watched on. All these sequences do have the effect of also drawing out the scenes they occur around. What should have been a relatively short paced series of scenes were extended a lot by these which occasionally meant moments dragged, but I did love the design decision to have victims have blood poured onto them from above. 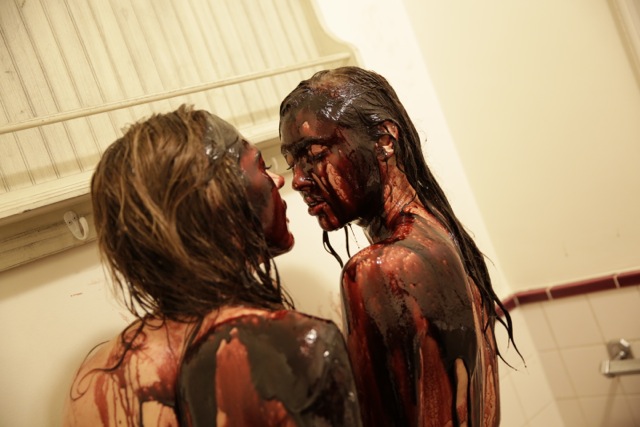 Despite the subject matter a lot of Ballet of Blood is more of a drama than anything else. There are plenty of scenes that would be filler in anything else but here they add to the nostalgic charm of an old style exploitation film. There is plenty of drug use here, and plenty of scantily clad females but refreshingly there are not actually any sex scenes to be found. The male cast is far fewer in number but have some good characters among them, I thought a scene in which Ria dances for her dementia afflicted grandfather was a highlight due to the way the actor said his lines. The script in general never takes itself seriously, which allows for some fun moments, such as a dream sequence when Maren summons the spirit of a ballerina figurine she once brought, who then admonishes the girl for being a bad person. Helping all this along is a great soundtrack that seems to mainly consist of stock music but which always fits well when it is used. Mainly the soundtrack is classical which goes well for a film set at a ballet school, and the main theme for the movie was thankfully a good one, it added emotive atmosphere to the goings on and appears in a few different versions.

With Ballet of Blood I didn't expect something that was highly polished or that had a high budget. With plenty of blood, abstract moments, and an admiring glance at cheap Euro horrors this was nearly everything I expected it to be. Go in with reasonable expectations and you will enjoy this one.