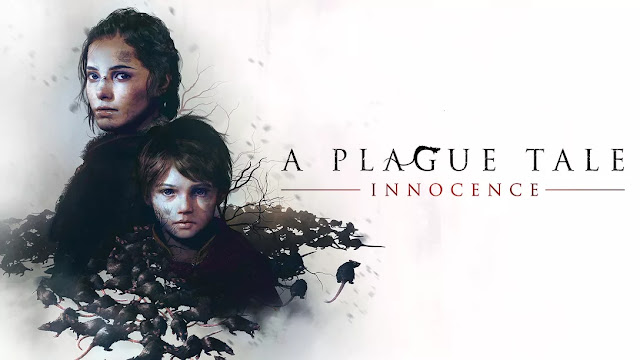 I have recently signed up to X-Box Game Pass and so far it has been very worth while. I had heard great things about the action-adventure horror stealth game A Plague Tale: Innocence, yet I had no intention to buy it, so seeing it newly arrived on Game Pass I decided to check it out, and I am sure glad I did.

This takes place in 1348 and mostly has you playing as Amicia de Rune (voiced by Charlotte McBurney), a daughter of a French nobleman. Her five year old brother Hugo (Logan Hannan) has been sick since birth, and so he has been kept locked away in the house along with her alchemist mother Beatrice (Katherine Pageon), who is working on a cure for him. One day the Inquisition turn up at the estate and start slaughtering everyone who lives there. Beatrice convinces Amicia to flee with her brother who it turns out is the objective of the Inquisition, she tells them to seek out Hugo's doctor, Laurentius. This begins the siblings journey into a France that is in the midst of being ravaged by a plague of almost supernatural killer rats. 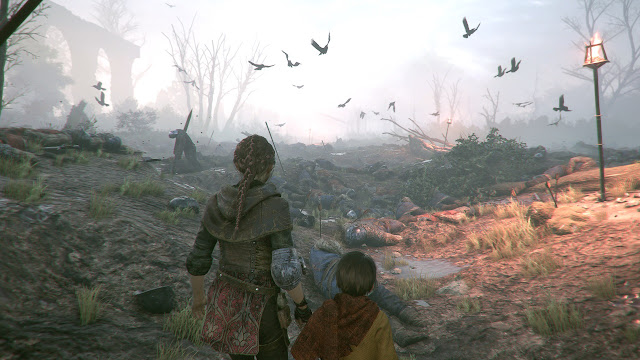 The Last of Us is said to be one of the influences on this game and it is quite apparent. Outside of the beautiful graphics the stealth action mechanics feel very familiar. You craft weapons and items on the fly, and the general flow of the game feels quite similar with you battling plenty of human adversaries, as well as more puzzle like sections where you have to infiltrate past the thousands of rats. This is split into seventeen chapters and clocks in at around ten hours (at a rough estimate). Each of the levels are vastly different from each other both in terms of locations as well as what you end up doing in them. A few of the early levels for instance include a plague infected town, a battlefield littered with hundreds of corpses and a monastery. All these locations look stunning which becomes more apparent when the use of light comes into play. The horror aspect comes both from the grisly sights you see play out in front of you, and by the thousands of swarming rats (getting killed by these makes for one of the more memorable horrific video game deaths I have seen in recent memory). Of course, there is also the odd nightmare sequence or two where the horror really can come to the front more.

The rats in Innocence are afraid of light, and so this is how many of the games puzzles play out. You get a variety of tools over the course of the game that allow you to affect the environment. So for example, to get through a dark room full of rats you can light braziers to clear a path. On the flip side you later get access to items that can put out fires, and so enemies holding torches can suddenly find themselves in the dark and swiftly torn apart by the vermin. There is a slow drip feed of these abilities and by the end things have changed up to a point I fully expected, but which I won't go into here. Amicia has a deadly sling which can be used to kill enemies with headshots. The enemies ramp up with later ones first wearing helmets, and later entire suits of armour. There is an assumption for the use of stealth, and that is by far the easiest way to get through the game, and the stealth works well here with plenty of leeway for error. There was also a steady increase in difficulty, more mechanics are introduced slowly which helps you to always get familiar with the controls, and even by the end the game wasn't that hard. By the final level though there were some quite frustrating moments, especially a checkpoint for an easy to fail section that was right before an unskippable fifteen second cutscene. It might not sound like much of a hardship, but I can tell you, by the twentieth attempt that damn cutscene had really lost its impact! 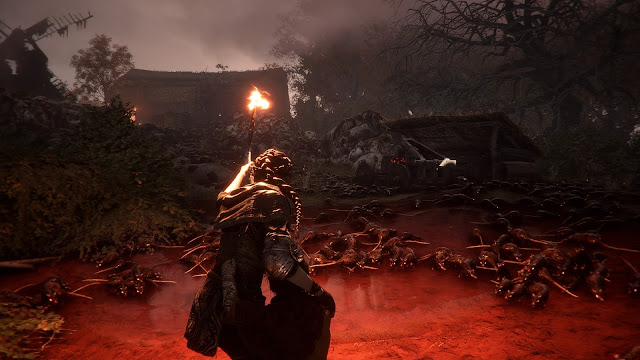 Much of the game has you as Amicia with Hugo along as an ever present presence. Having Hugo along made me fear for a game that would be one long escort mission. Thankfully despite me hating this kid (the amount of times I threatened to chuck him to the rats!) he is handled really well. Most the time he is there Amicia is holding his hand so he isn't able to get into too much trouble, but even when he was off doing his own thing the A.I was surprisingly good. There were only a small handful of occasions when my A.I partners got themselves killed, and often that was partially able to be blamed on my actions or inactions. I disliked Hugo, but not because of how he was handled, more that as a five year old he could be very irritating and prone to tantrums, not appreciating the story based danger he was in. At one point you actually get to play as him for a bit, this did warm me a tiny bit towards the character I guess.

To begin with the story didn't get me that excited, however I really started to get into it, especially when there are plot dumps that really make things more exciting. The adventure aspect of the story I really liked, it felt like you were on a journey, with it all the new and beautiful locations you would travel to. Everything around Hugo's illness and the ancient origins of the rats was fascinating, not so much the core story that boils down to something a little generic, even if the Inquisition had some great antagonists, such as the hulking soldier Lord Nicholas, and the leader of the group; the bishop Vitalis. You end up with a small group of allies, each of which was interesting in their own way, I always loved The Last of Us incidental dialogue and you get that too with these characters. It is all backed up with a sublime soundtrack, I enjoyed it so much that I am actually listening to the soundtrack as I write this review. I guess a criticism of how this game plays out is that it is very linear by necessity, but then if you have played The Last of Us you will know what to expect. 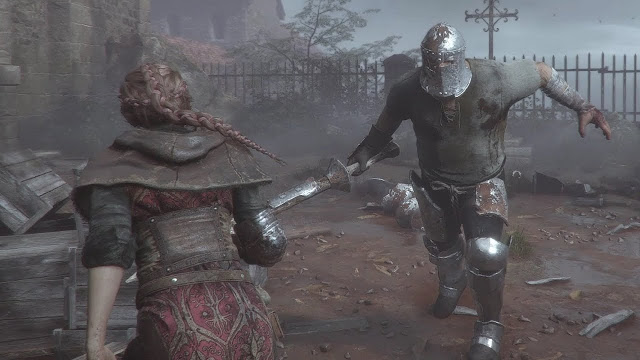 With satisfying stealth, a wonderful story and both beautiful graphics and sound A Plague Tale: Innocence felt like a really special game. While there isn't much replay value out of reexperiencing the story I felt like this was a fantastic experience, and being set in the 14th century, something a little bit different.