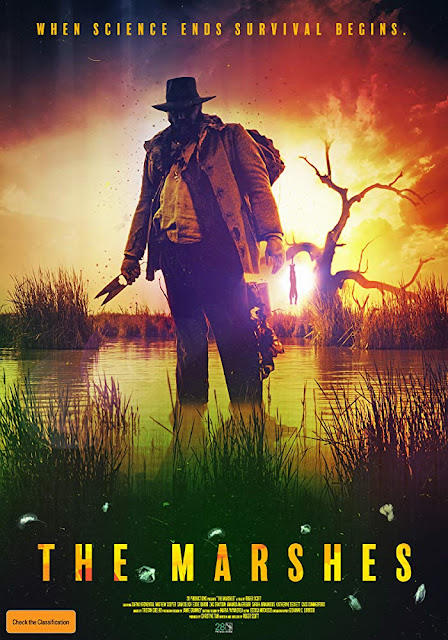 For once I am virtually caught up on the horrors I have for review, so instead this weekend I decided I would watch films of my choosing. Australian horror The Marshes has recently been added to Shudder, the service said it was released in 2020 and so I decided to check it out. In actuality though it first came out back in 2018, but only in Australia.

Three young biologists; Pria (Dafna Kronental), Will (Sam Delich), and grad student Ben (Mathew Cooper) head out to remote marshland on a field trip in order to take some samples. After encountering some poachers the three are wary, but decide to finish up their work before heading back, due to the nearest settlement being a three hour drive away. Pria begins to experience unsettling nightmares, and gets the feeling the trio are being watch, so urges a swift exit. However before they are able to leave they get plunged into terror as someone or something begins to hunt them down... 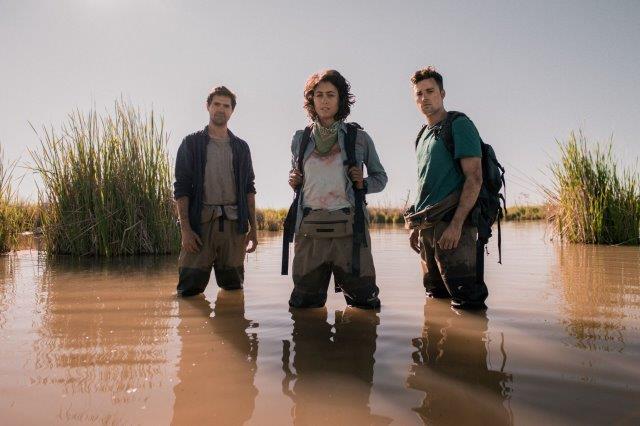 The Marshes struggles to maintain a course for how it wants its horror to play out. Initially, after encounters with disgruntled locals it seems this would have a Wolf Creek type of vibe to it. Later on this feels much more In the Tall Grass with the location of the marshes itself seeming to be the real enemy. With a murderous swagman (Eddie Baroo - Wolf Creek TV series) who may or may not be real thrown into the mix events become confusing to say the least. It felt like it didn't know what it wanted to be, almost like there were two vying interpretations going on with director/writer Roger Scott constantly going back and forth. This worked in keeping the story ambiguous. For example there is plenty here to point to everything going on to be one long dream sequence, from events that we are shown to actually be nightmares Pria is having, to the coincidence of the primary antagonist just happening to be the same as the figure from a ghost story about the origins of the Waltzing Matilda song Will tells earlier on in the movie. There is just as much evidence that everything occurring is real, with a hazy supernatural explanation for why things are so strange. This non-committal makes the film seem a bit unsure of itself rather than have it feel satisfyingly obtuse. This even stretches to the films ending that is actually two different endings playing one after the other. Both would have been great endings on their own, but together they cancel each other out.

One area in which The Marshes really succeeds though is the titular marshes. These are wonderful locations that the film really dwells on. Throughout the scenery is lovingly filmed, from the many close-ups of insects and small animals doing their things, to just shots of the marshes. This leads to some impossible to mess up cinematography, including overhead shots, and one beautiful part when a character is near centre shot with the setting sun behind a barren tree in the background. Also of a high standard was the sound, both with the minimal soundtrack as well as the sound effects, both added atmosphere to the remote locale. With the filming there is a reliance on shaky camera action whenever action occurs, sometimes this helps rise the threat and urgency, especially when characters are struggling, but it also happens a bit too many times for my liking. This mixing up of static and almost hand-cam style filming is another contradiction The Marshes has. 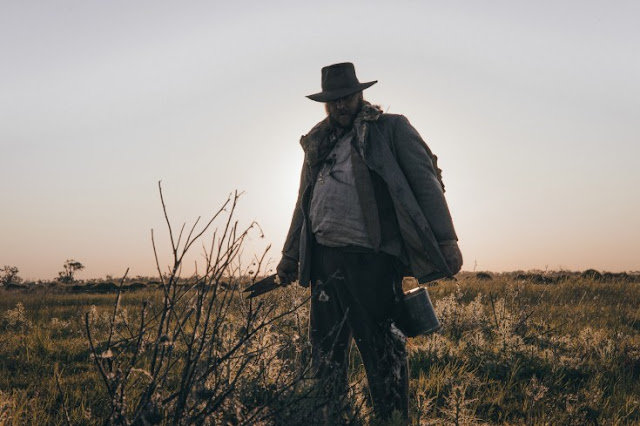 This is just under an hour and a half long, but due to the slow burn it can at times feel much longer. There are some moments that happen in the first half, but truthfully, this doesn't get into full blown horror until the halfway point. The characters don't have much to them at all really, so there isn't too much character development. You get the sense that in the past Pria and Will had a thing going, but other than that the characters don't really have much personality to them, especially with Ben. Some of the more action packed moments were enjoyable, such as the parts when characters get dragged off screen by a rope around their ankles, but the chases never feel satisfying due to them just petering out.

The Marshes had moments where it did get quite good. The location was a gem and was by far the best part of this. Despite the blurry moments I did also think the directing was pretty good. The plot was what really let this down though, leaving up the interpretation to the viewer is good when it works, but here with the fuzzy logic going on it feels like viewers and creators alike had no idea what was happening, which couldn't help but impact on the overall level of enjoyment.

Posted by Daniel Simmonds at 15:25