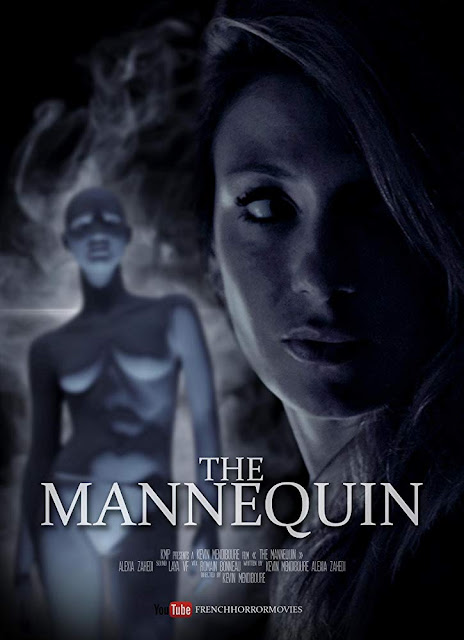 Short horror film The Mannequin is special in that it is the first film I have seen that was released in 2020. It was directed by Kévin Mendiboure (The Follower) and stars Alexia Zahedi. This follows a format that is extremely familiar to anyone who has seen more than a couple of short horror films, but does it still manage to be scary?

Alexia (Zahedi) is home alone waiting for her partner to return when suddenly all the lights go out. Random unexpected noises occur and she starts to fear someone is in the house with her, but as far as she is aware she is alone, alone that is except for the creepy mannequin she keeps in her downstairs hallway...

The Mannequin is just about four minutes long and it does achieve quite a bit in that time, with two locations in the house having spooky moments happen in. Mannequins are always a creepy object, for me they bring back memories of playing the fantastic Resident Evil 7: Biohazard in VR which actually featured a scene similar to this one involving those life size figures. The basic plot here was very predictable, I guessed right away how this would end and I was mostly spot on. The first half and the second half are mostly the same idea played out twice, and the jump scare had a great idea behind it.

The overall story here didn't stand apart from countless others, but one area The Mannequin really excels is the great sound design, the music on the one hand is suitably horror based, designed to ramp up the tension and suspense, but the sound effects were what really worked here. The highlight being the high pitched whine and distorted sound when Alexia first really panics. Talking of her, while she doesn't speak here, her panicked breathing and gasps sounded good. I also liked the end credits that have the sound of an object repeatedly rattling, calling back to an earlier point in the film.

This may follow a traditional path, but rewatching it I was impressed with how many short horror film tropes were fitted into such a short film. The Mannequin is one I far more appreciated for how it was created, as well as the types of ways it tried to create fear, than for the actual story it was telling.