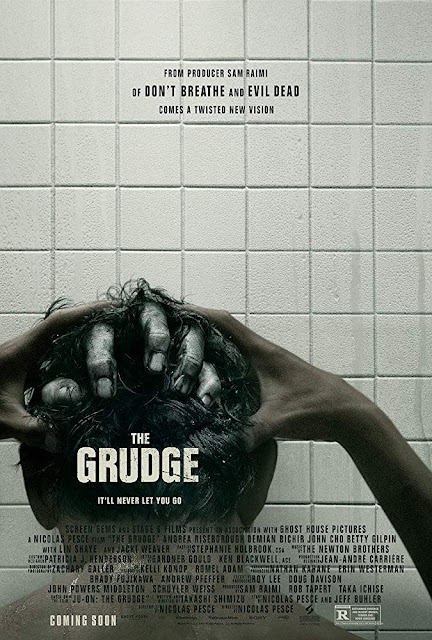 I was so off the loop on this latest version of The Grudge (directed by Nicolas Pesce - The Eyes of My Mother) that I only knew of its existence due to a colleague at my day job asking me about it. Before watching this at the cinema I had not even seen the trailer for the film. All I did know was that it was not meant to be very good. Back in 2002 when Ju-On: The Grudge came out in Japan I wasn't able to see it as anything more than a poor man's Ring. As such I have never rated either the Japanese or American series of films in the saga. Despite the name suggesting this is a reimagining this actually fits in neatly to the original American timeline of films, with this one taking place between (rather confusingly) 2004's The Grudge and 2006's The Grudge 2.

In 2004, Fiona Landers (Tara Westwood) returns home to her young daughter Melinda (Zoe Fish) and husband, Sam (David Lawrence Brown) in the US after working as a house clearance specialist at a certain spooky home in Japan. Not long after, a married estate agent duo head on over to the Landers house to get some papers signed.
In 2005 an elderly couple move into the Landers property, the husband has called on the services of a woman who can help with assisted suicide, due to his wife, Faith (Lin Shaye - Insidious) having got dementia.
Then in 2006, Detective Muldoon (Andrea Riseborough - Mandy, Black Mirror episode 'Crocodile') who is newly arrived to the area ends up going to the Landers property while working on a case involving a badly decomposed corpse found in a crashed car. 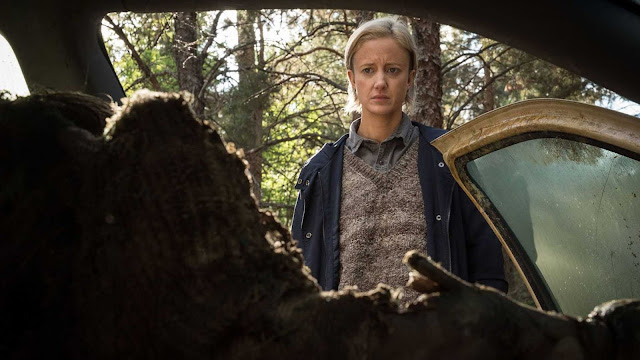 The plot is slightly hard to sum up due to there being three different stories going on over three different years. These plots all overlap with each other and aside from the first time each new story appears there isn't anything to let you know the focus has shifted to a different one. This was actually something I felt worked really well for The Grudge, I found it interesting how clues from the other stories would be shown to impact on whichever one happened to be playing. This also creates a slight anthology feel, and I do love me some horror anthology. All the way from the beginning to the end this mostly plays out shifting between the three. Other than the prologue, the actual Landers family don't show up as anything but ghosts. This isn't really a twist as it becomes apparent right away the family are all dead outside of that short beginning.

I think one area where people have criticised The Grudge is how tedious it can be. By the time this had ended it had gotten more interesting, but there was a chunk in the middle where it felt like not much was going on. Despite the different time periods each of the stories are kind of similar, and are full of well telegraphed jump scares that always failed to elicit a response. In the cinema there were quite a large number of people sat in front of my row, I never once saw anyone move an inch whenever a jump scare happened, in fact it was the opposite for the final one of the movie when I heard a woman off to my right laughing out loud when that occurred. By having so many jump scares the law of average means that some of these I did quite enjoy. They were always obvious, but at least some of them were interesting. One part of The Grudge lore I think is quite good is that to be cursed by the titular grudge all you have to do is set foot inside the cursed property, and once you have done that there is zero way not to be haunted and terrorised. At one point Muldoon calls paramedics to the house, this was never explored but I did wonder what became of them as they must have gone into the house itself in order to do their job and so surely also be cursed! 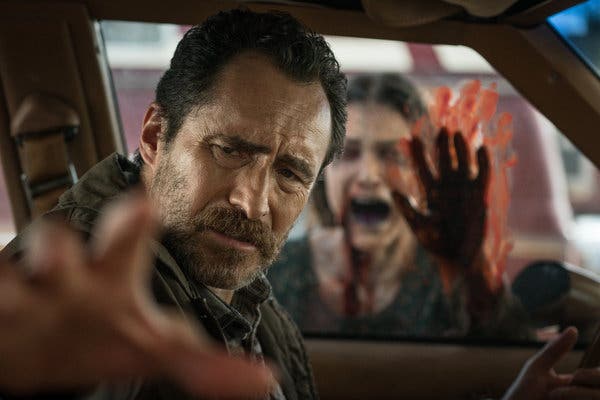 Another aspect I liked about this movie was how nasty and miserable this was. There wasn't a scene that went by that had any sort of warmth or happiness to it. Characters look haggard and tired, and have traumatic backstories, which is complimented by the oppressive looking locations. I also felt the make-up effects were good, such as the look for a character who had shot himself through the face, and another time when a character has lost their eyes. The acting was not bad also, the characters all had their own sense of identity to them, and the child actors were not terrible.

The Grudge is by no means a fantastic film, however I felt it was better than people have made it out to be. If this hadn't seemed to be designed purely around attempts to make jump scares then this would have fared a lot better. I did really enjoy the format of the three interlinked stories. Pardon my pun but I didn't begrudge going to see this movie at all.