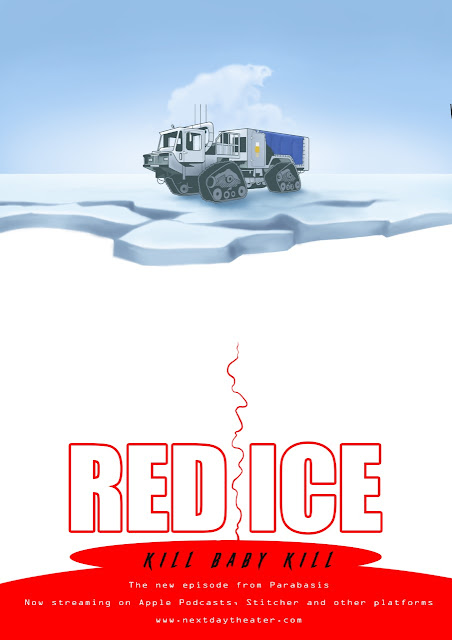 I had intended my December news post to be the very last thing I wrote on my blog in 2019. After shutting down my PC and closing my office up for the year I happened to be listening to part 2 of the horror comedy Red Ice from Next Day Theater's Parabasis podcast anthology series. I don't know why but I had assumed it was a three parter, and with only two episodes on iTunes I figured there wasn't any reason to review it until the final part was out. So egg on my face when episode 2 ends, and with it brings an end to the story. Red Ice is set out like a found footage, a device that works as well as audio as it does using film.

This takes place in 2020 and a radio documentary team have been invited to interview a crew surveying for oil in Alaska's Arctic National Wildlife Refuge, that is using cutting edge technology designed to be much more protective of the environment. It soon becomes clear that maybe everything is not as well meaning and innocent as it at first seems. Even this pales in comparison to the events that follow, events that result in this recorded audio being the only surviving testament to the horror witnessed at that remote base...

Red Ice is a two parter, with each episode being roughly twenty five minutes long in length. Rather than go the route of having purely audio there is a lot of background noise and effects used to really make it seem like the cast are actually out in the Arctic. These effects are what really make this so successful, it adds a lot of atmosphere. Despite being a comedy the horror part isn't shirked on, and the humour isn't overwhelming. Instead it is more subtle in that it shows itself mainly through the dialogue characters have. I can't go too much into the story without spoilers, but this involves a fun twist midway through episode 1 that includes both racism, rampant drug abuse, and a complete disregard for environmental protection. Occasionally due to being audio only it was slightly confusing I found.

There is a large cast here compared to audio books I have listened to in the past, including among them Julian Kingston as Kevin, Jennifer Yadav as Amara, and Becca Barrett as Michelle. Having the format of an audio based play was something I have strangely not personally come across before and it was quite enjoyable. It also feels very much of the time, dealing as it does with topical issues such as climate change. There is a sense of justice to what happens here, the horror helped along by some great sounding roars during the more dramatic moments (such as the majority of part 2).

Red Ice was an enjoyable story that was told in a fun fashion. I liked it enough that I subscribed to the Parabis podcast for whatever they put out in future. A nice blend of dry humour and horror that gets more dramatic as it goes on makes for a fun hour. Head to the Next Day Theater website for info on how to listen to this yourself.