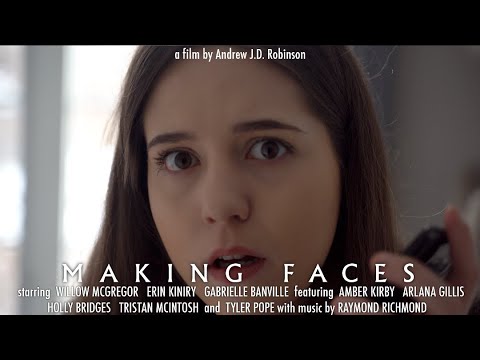 Making Faces is the latest short horror film from Andrew J.D Robinson (The Becky Carmichael Fan Club, Candle Cove). This takes a look at the falseness of the online persona people portray and explores that in a horror setting. I admit to not quite understanding this one, yet even despite not getting it I found this to have, like so many of Robinson's recent shorts a sustained sense of unease that stayed with me long after I had finished watching.

This starts effectively with a young woman: Cassie (Willow McGregor) posing for happy selfies of herself, but struggling to hold back the tears. This set the tone for the whole short with the duality of actual and projected emotions. The main part of the short is a phone conversation Cassie is having with a photographer about a photo she had brought, which had turned up blank. As the woman tells her about the circumstances that led to the unique range of photographs she is selling Cassie comes to learn the horrific truth for herself.

After repeated viewings of Making Faces there is no sense of inexplicable dread lost. It helps that the main character is on her own in an isolated setting, it also helps with the sudden loud sounds that break up the relative silence, from a doorbell ringing (that despite sounding nothing like my own I thought it was from my door!), to the abrasive ringtone on Cassie's phone the sound is designed to put you on edge. McGregor is a relatable protagonist and I like how you get a sense of the inner turmoil she was facing. It was also a nice touch that there is perhaps a guest cameo of the character Becky (voiced by Gabrielle Banville) from another of Robinson's shorts. A lot of the horror comes from the nightmarish images caught on camera, the faces trapped in anguish and terror are quite creepy.

Making Faces was a well made nine minute short. The trip-hop style music is forever associated by me to the Silent Hill horror video games and so its use here effortlessly combines with the story to give a feeling of creeping dread. Watching this was a good way to start off the new year.