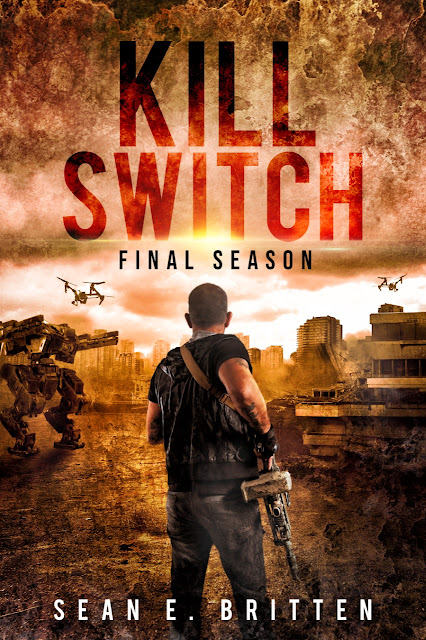 Out of the books I have read of author Sean E. Britten it is the Kill Switch series that I have enjoyed the most. Taking place in a Transmetropolitan style of corrupt future where advances in technology has led to a cheapening of life, the Kill Switch books occur within a deadly game show called 'Slayerz' in which criminals are fitted with the titular kill switches and forced to team up with a partner in order to survive a Battle Royale style deathmatch. I really enjoyed the previous books; Kill Switch and Kill Switch: Serial Escalation and so had no doubt in my mind I would also love Kill Switch: Final Season.

Following the format of the previous books it is once again a new year and a new season of Slayerz in which we follow two more mismatched contestants as they try and survive against their rivals. After being banned from taking place on American soil after the release of abominations last season Slayerz has relocated to the land of the often mentioned 'bio-wars'; Africa. This season the theme is bio-wars and so many of the contestants are made up of people who had something to do with those, as well as genetically modified mutants that were created to fight in them. Former soldier, turned mercenary Digger Dundee has been partnered up with a young boy given the name of Homo Superior Number Eleven, nicknamed Homer by Digger. Things start off business as usual, but along the way something happens that swiftly changes the course of this years game.

Final Season manages to be the most action packed and chaotic entry in the series yet, and also seemed to be longer than previous books. This felt like a rehash of past novels, but in a good way, I am always up for the 'battle royale' style of action these books contain. I was slightly worried then when around halfway through things change enough that I wouldn't get my traditional Slayerz action I like so much (again I fear if this was a real show I would be addicted to it!). However I soon came on board for this change in direction, helped in no part by the insanity of what is thrown against Digger and other characters. With killer sex-bots, mechs, mini nukes, psychics, scorpion shaped tanks, lethal gas and super fans there was no end in the variety of ways that murder and mayhem unfolded on paper. Britten's inspirations are many, everything from Stranger Things to Crocodile Dundee and the Fallout series of video games get nods, and the sheer amount of variety is what makes this book so joyously fun to read.

The Australian Digger is a great protagonist to follow, I liked that he loved a fight, which could be seen in the way he acts here. It was fun how during gunfights he would also fling insults at whoever he was battling, though I couldn't think of him in my mind as anything other than Jai Courtney's Captain Boomerang from Suicide Squad. It made a change to have a loveable rogue as the main character, and having his partner be a mute that he can only have one sided conversations off meant he got the limelight initially. As events unfold more characters join the book and so chapters split off to show their exploits. Without spoilers there are some big nods to specifically Serial Escalation which was nice to see. The various teams included in Slayerz are made up of mismatched duos as always. So for example you have an expert sniper; DFN Jefferson teamed up with a genetically altered lightning fast boy named Bolt, who is basically this worlds version of The Flash or Quicksilver. Elsewhere you get a hulking near invulnerable Russian armed with a mini-gun, a Nazi super soldier wielding a chainsaw, the six armed Kali, and a vampire type creation called Alucard. As always the fights against these various inventive characters were near always exciting, especially Dozer the Russian who characters got caught in a thrilling protracted battle with.

Plot wise this was always going to be heavily action based, with the Slayerz format leading to a vein of humour rather than horror. This had some of most funny moments yet in the series, a highlight for me being a character discovering their super-fan, that plays out like an action packed fight, but with some lines spoken that nearly had me laughing out loud. Keeping with the style of the other books the twisted and funny advertisements are back, each chapter opening with a new advert that are often both really silly, and amusing. I loved one about lethally designed futuristic contraptions of a Robot Wars style game show getting pitted against the antiquated very basic looking former champions, that sound like they are from our current time period. I also thought the idea of a Slayerz board game that sounded like a cross between Dungeons & Dragons and Cards Against Humanity was pretty neat, and of course Meat™ Sphere!

With Kill Switch: Final Season you have another really well written, brutally violent entry that never failed to entertain. This was a great way to finish the trilogy, and still leaves plenty of wriggle room for further entries if Britten so desires. More of the same for sure, but with the controlled insanity contained within these pages it was so entertaining that it is hard to fault.

Posted by Daniel Simmonds at 15:21