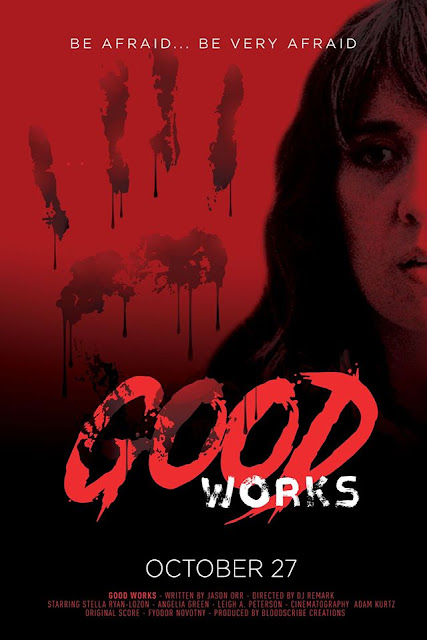 The award winning Good Works is a fourteen minute long horror film from director D.J Remark (who also played the part of Styxman in The Curse of Lilith Ratchet), and which was written by Jason Orr. It takes the familiar style of a lone woman home alone experiencing spooky goings on, but changes up expectations by having the woman relatively unfazed.

Sam (Stella Ryan-Lozon) starts to see eyeless and heartless walking corpses wherever she goes. While she appears a bit frightened of this it doesn't stop her carrying on her daily routine as normal. This leads up to a conversation in which all is explained. 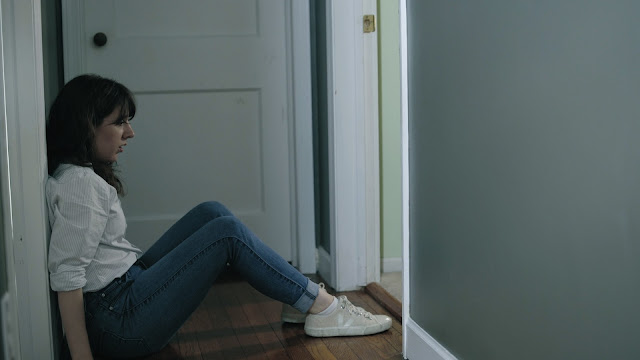 This began quite surreal with corpses appearing around Sam, but her not really noticing them. The reveal was something that wasn't expected, but leads back mainly to a conversation she has with a religious woman who knocks at her door (Leigh A. Peterson). Mainly Sam just carries out normal things, she has a cup of tea, eats some lunch, and gives her mum a phone call. This satisfies not in being scary, but by explaining the biggest mystery it creates. I liked the way Ryan-Lozon acted, was a nice down to earth type of style. The make-up effects for the corpses were not bad, they all looked suitably freaky, and it was all filmed in a satisfying way.

Good Works takes a very familiar style of story telling but turns it on its head a little bit, making for a film that was more interesting than scary, but which changes what you think you know about everything going on.