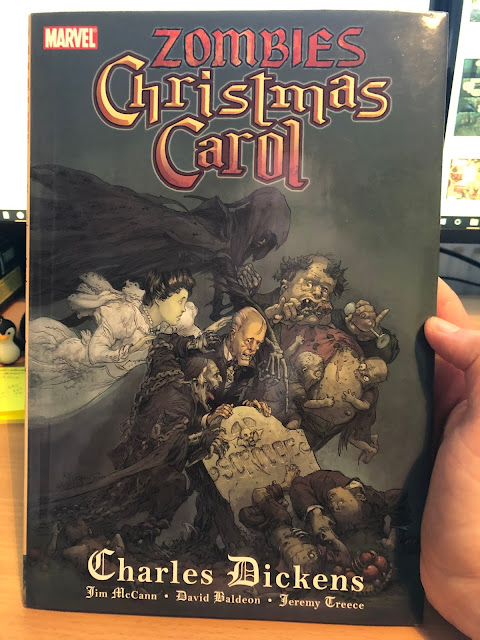 All year long I have been reading through the many Marvel Zombies graphic novels, if you are a regular visitor to my blog I bet you will be glad for me to get to the end of them! It was with perfect timing that Zombies Christmas Carol just happened to be the latest novel I was due to read. At first I figured that this would be the traditional Charles Dickens A Christmas Carol story but with Marvel zombies inserted, I was nearly correct but not quite. Think Pride and Prejudice and Zombies but in a graphic novel style, the traditional story but altered to include the walking dead set over five issues.

It is Christmas Eve and the miserly Ebenezer Scrooge is working late. London is slowly getting overrun by a plague named the 'hungry death' which started off by affecting the poor, but which is now spreading across the city, and which turns its victims into flesh hungry ghouls. In desperation Scrooge is approached to donate some of his vast wealth in order to deal with this disaster, but of course he refuses. That night Scrooge gets visited by three ghosts; the ghost of Christmas past, the ghost of Christmas present, and the ghost of Christmas future who hope, over one night of troubling revelations and terror to transform Scrooge into a man who can not only redeem himself, but also save the city of London in the process... 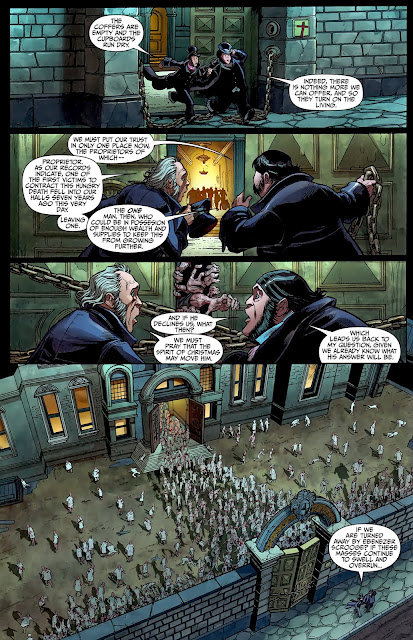 I really expected this novel to be the least interesting one out of the whole series for me. How wrong I was, this is a gorgeous graphic novel that is full of wonderful illustrations, and bright vibrant colouring. The style for the characters is exaggerated, unrealistic proportions such as Scrooge's long chin, yet it never goes over the top. Characters look exaggerated for sure, but they are also in proportion to each other and fit neatly into this cartoon world of Victorian London. Panels are easy to follow and have variation to them, including some great looking full page images, such as Scrooge's reaction when he sees what the ghost of Christmas future looks like, and a full page image of the undead nightmare that Marley's ghost has become. The lettering is also very simple to read with clear text bubbles, as well as Gothic style text used for narration that appears on the page in the form of scrolls.

The designs of each of the ghosts I enjoyed, but they were constricted a bit by the descriptions in Dickens original novel. As such they didn't really feel that different to the portrayals of these ghosts in other media. The ghost of Christmas past was the most interesting due to how this figure was related to Scrooge himself. That is one part this book excels, by linking the ghosts directly to Scrooge. The ghost of Christmas present is presented as a large jovial floating man, something I had seen before, though the baby zombies he carries with him, representing Ignorance and Want were something bloodily different! Then finally there is the ghost of Christmas future who even more so seemed very familiar, a black hooded silent figure. I liked how the zombie apocalypse was inserted into this story, and how it is heavily implied that it could have all stemmed from an incident in Scrooge's childhood. It leads to some dark moments with children, and loved ones coming back as ghouls. Putting Scrooge as the possible saviour of mankind was a move I hadn't expected, and was a welcome one.

Story wise though it is the final issue 'The End of It' where Zombies Christmas Carol falls down slightly. Originally all Scrooge had to do was wake up on Christmas morning and become the man he always should have been. Here Scrooge has to not only do that, but also stop an undead apocalypse in its tracks. The way this is handled wasn't the way I expected, and I think my way would have made for a better story. As it is it felt a little too convenient and rushed, and gets a bit metaphysical, the outbreak is a physical manifestation of Scrooge's negative effect on society due to his selfish and negative ways. After the final issue in the novel there are some interviews with the creators of this series which for once I actually found to be quite interesting, and has some original concept sketches included.

Zombies Christmas Carol was the most feel good book in the series, and surprisingly despite not featuring any actual Marvel characters was a most enjoyable read. Well written, great art and presentation make for a zombie themed Christmas tale that was just really grand.