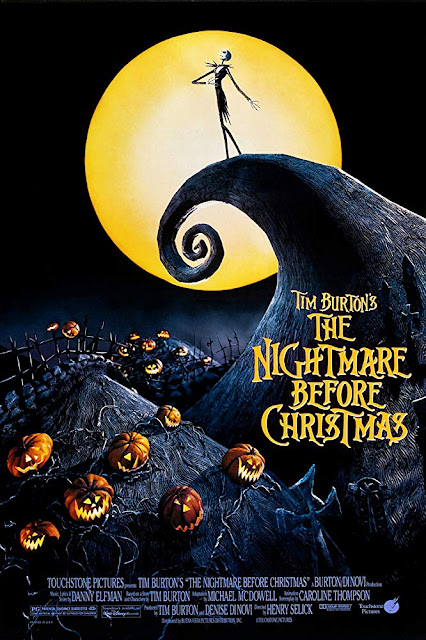 Much as I was surprised that I didn't own the Disney stop-motion musical classic The Nightmare Before Christmas on DVD or Blu-Ray earlier last week when I went to watch it I was also surprised that I had never reviewed it before on my blog. This is a film I'm sure virtually everyone is familiar with, one which weathered the love affair emo kids had with it in the early noughties and has once again returned to just being a great classic. I saw this when it was showing at the cinema originally, and have always been a big fan of this. It is a film that straddles the line between being a Christmas film and a Halloween one, this year I chose it as the first Christmas film I viewed for 2019.

Jack Skellington (Chris Sarandon - Fright Night for the speaking voice, and Danny Elfman - Forbidden Zone for the singing voice) is the ruler of Halloween Town, and each Halloween in the real world he and his people 'invade' in order to make the event occur. Jack has grown tired of doing the same thing year after year though and yearns for something different. His prayers are answered when wandering one day he stumbles across a clearing in a forest which contains gateways into each of the other yearly special events. The Christmas door in particular draws his attention and so he enters, finding himself in Christmas Town. After his experience there he returns home, determined that the next years Christmas will be one done by him and his horrific subjects... 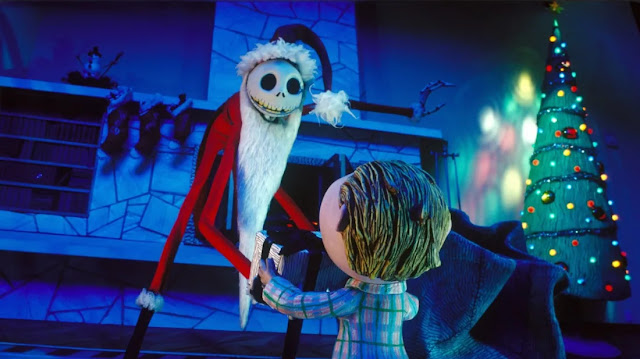 This was the first of the stop-motion films of Disney in the 90's and was also the best. This is helped by the typical Tim Burton Gothic aesthetic (Burton created the story and characters for this), and the typical playfully dramatic music of Danny Elfman. Throughout there are many songs and nearly all of them are great. From the introduction piece 'This is Halloween' to the festive feeling 'What's This?', and the usual villainous song in the form of 'Ooogie Boogie's Song'. There really isn't a bad song to be found here, from the sang numbers to instrumentals all work so well, unlike something such as The Corpse Bride which had mostly average songs. I guess here 'Making Christmas' is the worst one, visually appealing, showing as it does the contrast between Santa's Elves making presents, and the twisted Halloween Town version of this, but the song suffered due to not having a catchy chorus.

Often with Blu-Ray releases of older films the sharpness of the picture can really detract from the sets and effects of the time, Labyrinth is a prime example with the backdrops standing out as obvious paintings rather than having any depth to them. Here with a stop motion animated film this doesn't occur, the sharpness just adds to the overall enjoyment of watching this. It helps that backgrounds are blurry a lot of the time, with the forefront image in sharp detail. Halloween Town and Christmas Town both look fantastic, and benefit from the wonderful lighting, as always it is the real world segments that look the worst. Chiefly is that humans appear with their heads obscured to avoid having to give them any sort of detail. Both the policeman and the news reporter are shown with objects blocking the picture. This wouldn't be so bad if it fixed the problem it was trying to fix, however just one look at the weird putty hands of the policeman is enough to know they kind of failed. Character design in general is fantastic, especially with the denizens of  Halloween Town such as Jack, Sally (voiced by Catherine O'Hara - Frankenweenie) and the corpse family, helped in no small part by the great animation. 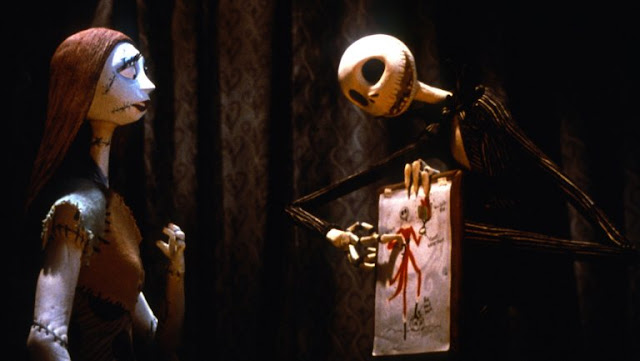 The plot is something a little different in that the protagonist Jack can also easily be seen as an antagonist for someone else. His self centered plan to take over Christmas, a plan that involves kidnapping Santa (voiced by Edward Ivory) can be seen as evil, but he does it from a well meaning, but warped sense of duty. The proper antagonist is Oogie Boogie (voiced by Ken Page) whose gambling obsessed persona leads up to a finale that doesn't have too much happening in it, but which ends on a satisfying note. His song compared to that of other Disney villains isn't bad, but the standout song for villains here has to be the one Oogie's underlings; Lock, Shock and Barrel sing as they prepare to go on the mission Jack has tasked them with ('Kidnap the Sandy Claws', there is a great Korn version of this song). I didn't even mind the love story subplot going on here, at least it results in some of the more mournful (and dare I say it emo) songs of the films, such as the obvious choice with 'Sally's Song'.

I have lost track of how many times I have seen The Nightmare Before Christmas, it is up there with Home Alone and Batman Returns as one of those films I just end up seeing each and every year. This remains a great children's horror, and just an enjoyable film in its own right, with catchy songs, great animation, and a plot that does something different to the norm.