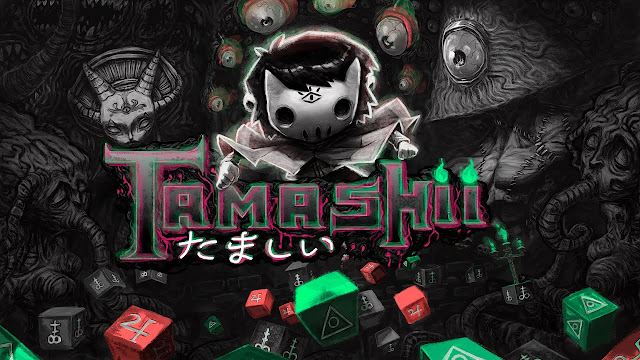 On Christmas I was browsing on my phone when I come across an article on Destructoid talking about obscure gems on the Nintendo Switch store, one of these in particular caught my eye; a horror puzzle platformer called Tamashii that was inspired by Japanese horror games of the eighties and early nineties. There isn't too much about this on the web, or I should say, not much in depth stuff and so my story summary will be taken by my own impressions.

Tamashii takes place within the walls of a corrupted ancient temple that belongs to an immortal dark deity. Due to this corruption its power is weakening and so it creates a being from part of itself (the player character), and tasks this being with exploring the temple and finding out what is causing the problems. Soon it is discovered a witch has taken refuge within the walls of the place, but that your goal may be similar to hers, if not for different reasons. 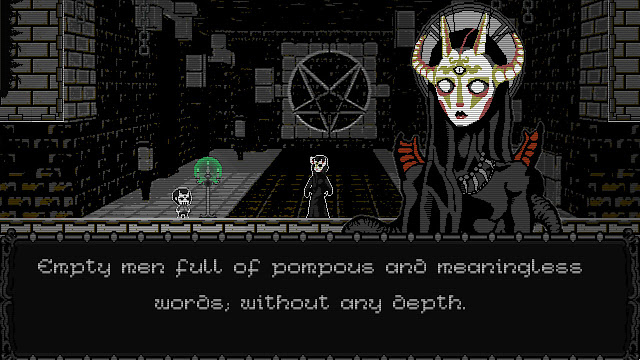 So this is a 2D puzzle platformer that takes place via a series of levels that can be accessed from a hub world (hub temple I guess). There are five main smaller temples, each of which is dedicated to a different dark entity, and each with their own unique puzzle styles. Your character can double jump, but you have no attack options, the only power you have is related to creating clones. Up to three clones can be created at a time, and these are static, staying in the spot you have created them, unless you use a special switch within certain worlds that lets them move left or right. Mainly the clones are used to activate switches, by being placed over them, or put on pads that activate the exit door. Each of the temples is made up of a series of rooms, each of which is exited by activating the exit. So, each room is one big puzzle basically. I'm not usually a fan of puzzle games like this but here it is helped a lot by how quickly you spawn back into the world should you die. Obstacles and enemies are all single hit kills to you, and you can even kill yourself by holding down the '-' button. Towards the end of each level you are given a choice between a hard and easy path, the hard path is not as difficult as it sounds, and gives you a rune needed later, as well as some story exposition.

At the end of each temple area you are pitted against a grotesque boss that requires the use of skills learnt throughout whichever particular temple you are in. These are nightmare fleshy creations that aside from one who has the appearance of a tall Nosferatu, look really unsettling, as well as quite disgusting. Sometimes you will need to place clones on pads in order for them to attack the boss, sometimes it is more about running away from the boss than fighting it, such as the battle against a giant screaming flesh skull in which fatal white liquid quickly fills up the level. The bosses were a highlight of Tamashii and shows it at its most nightmarish. 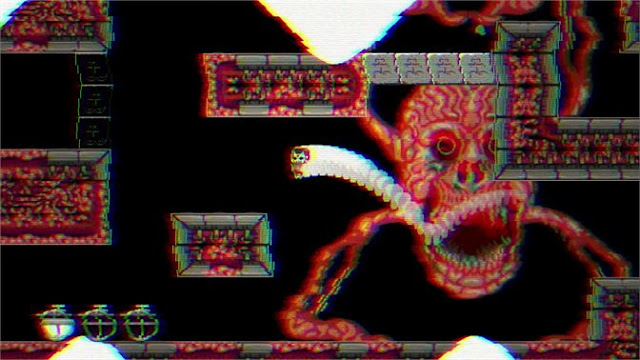 Despite this being a 2D game with graphics halfway between NES and SNES it maintains an unsettling atmosphere. Most of the game is white, black and various shades of grey with colour only turning up as mainly red and pink for the monster elements. The most twisted moments are where a creepy image of a face appears overlayed over the screen, and then the level you are in briefly takes on a Silent Hill style messed up appearance. The game is rife with Satanic imagery and has a great visual look throughout. The story is obtuse and adds to the overall atmosphere, but I really didn't like how it all ends. In fact it ends on such a flat note that I spent about an hour afterwards back in the game assuming that wasn't the real ending, but it turns out it kind of was. Tamashii trolls the player a bit with the game itself appearing corrupted at times. A lot of the secrets of the game involve you discovering glitches that made me more than once think it was legitimately broken, these fourth wall breaking elements are the most creepy in that they seem to be a whole different story to the actual game. Finding a room that gives an apparent image from a real world web cam, that has the correct time and date showing, or a PC style clickable text box appearing, as well as levels that seem to have corrupted code to them all comes across as plain weird!

Tamashii isn't as scary as it first appears. I loved the dank and dirty atmosphere, and the look of this, but the game is relatively smooth to get through. I played through the whole game in around two to three hours, and found the puzzles satisfying, but only a couple were head scratchers. This was fun, with responsive controls, my main complaint being how abruptly it seems to end. So, check out Tamashii, it has a cheap price, a great style, simple yet effective music, and a cool sinister feel.