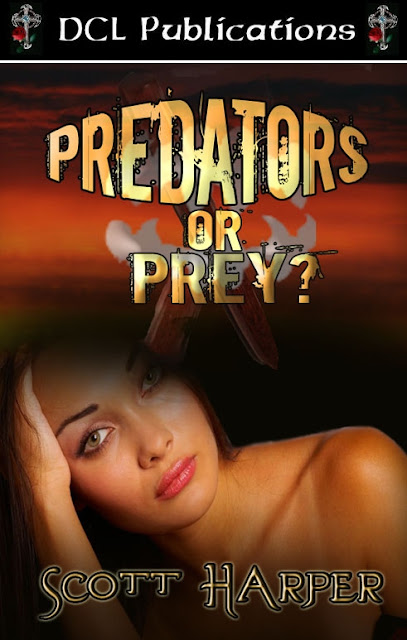 Predators or Prey? is a horror novel that both shames me and makes me a little bit relieved. Scott Harper's vampire book shames me as he sent it my way some seven years ago, that's a hell of a long turn around to reading it. Something I can only put down to laziness and having a string of bad luck concerning eBook readers. I nowadays tell anyone who sends an eBook novel my way; you may be waiting a long long time for a review to go live, but it will eventually happen. Having finally read this one I just have to make the best out of an embarrassing situation.

Wendy and Jacob are a couple who travel the backroads of America, with Wendy's young brother Glen along for the ride. They purport to hunt vampires, but in reality they are swindlers who con their gullible clients by pretending to hunt the creatures. One fateful night however they are horrified to discover vampires actually do exist, after they stumble across a group of them at a graveyard. The two pretenders manage to bumble their way into not only killing a couple of them, but also accidentally burn down the vampires hideout. After fleeing the town, a grizzled man named Teague approaches them and offers his assistance, as he assures the pair that the bloodsuckers will be hot on their trail to get revenge. It seems though that the vampires may turn out to be the least of their troubles...

Predators or Prey? got off to a bit of a rocky start with me as I just could not stand the smug, self absorbed protagonists of Wendy and Jacob. It was good then that the book charts not only their misadventure, but also the demolishing of their relationship. Jacob in particular is a character whose presentation is destroyed over the course of the story, on the surface a cool, assured character, but he hides a cowardly side. Wendy was a character who I liked a lot of the time, but I didn't like how sexulised she was. On at least three separate occasions she is naked in front of a mirror admiring her own body, while she appears to be irresistible to any male character she meets. From priests to shop clerks and motel owners, all are completely hypnotised by her breasts. I know large chested people in real life, and while they get more of that sort of attention than others, not to the degree which it happens in this novel. It just became a little farcical. Outside of the physical appearance I did think she was not a bad protagonist. Her adventure shapes her into someone willing to do the right thing, while with Jacob it shapes him into someone who just wants to look after his own skin.

There are plenty of vampires here, and plenty of action with them assaulting Wendy and Jacob. I liked where the story went, it gave me vibes of Near Dark with the small American towns the two travel through. The detail on the vampires is cool, with many descriptions of damage inflicted on them, and descriptions of the fluids and blood they are covered in. I also liked how many of the tropes for these creatures work here. From needing permission to enter homes, to being afraid of crucifixes, holy water and sunlight, most the tropes are present and are fun to see explored. I liked how the story wrapped itself around so that when the conclusion happens it has all gone full circle. I also liked the misdirection that the middle part of the book becomes. This is a simple story that was told in an enjoyable way. Without subplots, and by following around Jacob and Wendy for the entire story everything is focussed on their plight which helps with keeping events insular.

Predators or Prey? was an entertaining modern day vampire story that featured plenty of action. The protagonists may be very flawed in their own ways but I was interested to see how this tale of revenge would play out, and I can't say I was disappointed. It may lack complexity, but this focus on the one single storyline worked out well. Predators or Prey? can be purchased in paperback here.