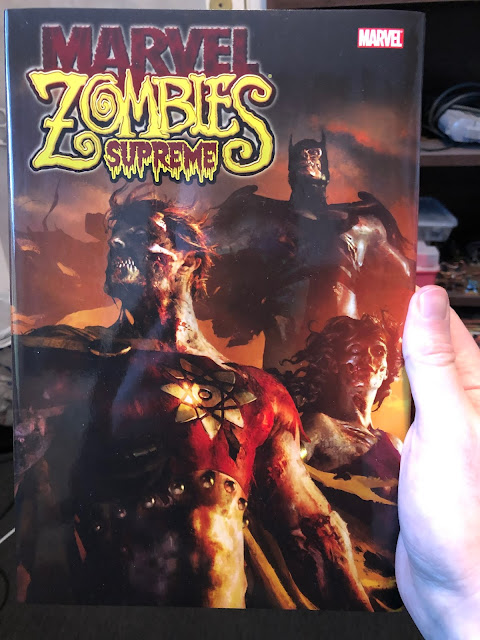 All year long I have been reading my way through the various graphic novels that make up the Marvel Zombies series. With the over aching story seeming to be cleaned up, with Marvel Zombies Supreme we get a story of undead superheroes that takes place in its own little bubble. After the sheer inventiveness of Marvel Zombies 5 this return to a low key, and dare I say it generic story made for a weaker story. For me personally I had not heard of a single Marvel superhero in this one and so my enjoyment was not as high as previous.

Some time in the past a team of super heroes from another dimension, calling themselves the Squadron Supreme got trapped in the main Marvel universe. Eventually they found a way to get back to their own world, but not before they agreed to provide data on their DNA structure to the scientists at a Project P.E.G.A.S.U.S research facility. There, a rogue scientist conducts a secret experiment to create clones of the Squadron Supreme, and he kind of succeeds. However his clones come back as twisted zombie versions of these heroes, ones who have an unending taste for human flesh. After the facility goes into lockdown an elite military special-ops unit is sent to investigate, unaware of the horrors they are to face... 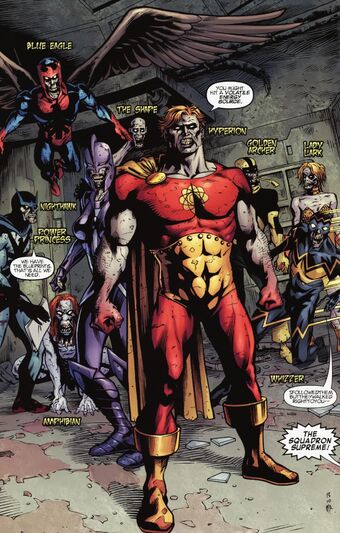 Apparently the Squadron Supreme were characters that were heavily based on DC superheroes. Even to my unknowledgeable eye Hyperion is an obvious stand in for Superman, Nighthawk for Batman, Lady Lark for Wonder Woman, and Whizzer for The Flash. A problem with having so many characters in one place is that when they are together in a group they really don't do much, mostly just standing around in the background while others fight. It becomes a lot better when these characters are seperated, it leads to some pretty fun fights, the best being the fight with the undead version of The Shape later into the novel.

This is split into five issues and the best really is served right up. The special ops unit going into an underground base brought to mind memories of Resident Evil. I really liked this first issue. Issue two takes place almost entirely in Kansas, where a bunch of freshly invented superheroes (Sunflower, Grain Belt, Pioneer, Meadowlark and Topeka) battle one of the escaped monsters. Again this wasn't a bad issue despite it suffering by using made-up heroes. Issue three was where this began to fall down a bit, this one detailed a zombie outbreak in a small town, it was dealt with within the span of a single issue and just felt a bit rushed. Where Marvel Zombies Supreme really falls down is with the arrival of superhero Jack of Hearts who seems to speak almost entirely in card based puns which became exhausting after a while. That, and the appearance of the primary antagonist, a generic as they come mad scientist.

Mostly the art is decent, there are some parts that looks so bad as to be unfinished, in particular an attack by a minigun on Hyperion has these really weird looking basic deflective bursts coming off his body. At several points there is an off putting blurring effect put on the art for characters which just made it look they didn't fit with the rest of the panel very well. Despite that there are definite highlights here. In addition to a heck of a lot of dismemberment and blood there are some fun story moments, issue two having the best of these with a fight against skeletal cows. The story was almost dull in how typical it was, there didn't seem any attempt to innovate outside of having these undead be superheroes. The dialogue suffer the most, often coming across like a poor attempt to retell the Marvel Zombies concept of former heroes realising the monsters they have become, but rushed through in such a way as to be unsatisfying.

Marvel Zombies Supreme is in no way terrible, however this far down the line into the series I did expect something that had a little more depth to it, rather than a braindead wild ride with boring characters, a weak script and predictable outcomes. On the flip side of this there is plenty of undead gore and violence so this remains attractive to read through. A mixed bag, likely to be more enjoyable if you are familiar with any of the characters featured here.

Posted by Daniel Simmonds at 03:59