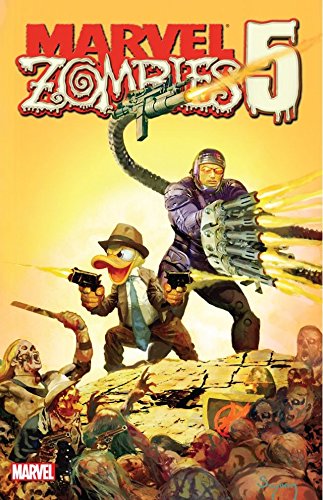 It had to happen eventually, and with Marvel Zombies 5 it finally has. This series has gone off the rails, but thankfully in a way that I happened to love. Gone is the attempts at horror that previous books in the series have tried, and here there is instead plenty of humour, crazy ideas and dimension shifting.

With a zombie virus now present in the main Marvel universe, Morbius has found a way to maybe find a cure. A planestorm event is occuring over five different realities (planestorm being 'permutations of highly unusual incident manifesting across multiple alterniverses'), and this particular event happens to feature five different zombie outbreaks occurring at the same time over five different realities. It is hoped by sending Machine Man and Howard the Duck to these different places they will be able to collect a sample of each zombie type in order to create a antidote. So this unlikely duo find themselves over the course of five issues in a Wild West world, a world where H.G Wells War of the Worlds actually took place, a medieval world, a cyberpunk one, and a reality identical to our own.

From the descriptions of the world it should be apparent to see the scope for a lot of variety to happen. Each of the five issues takes place in a different reality, and features a self contained story. In each issue the undead are based on ones from different famous horror films. The ones in the Wild West world for instance are named 'Romero's' and act like a more traditional ghoul, elsewhere you have ones based on the deadites from The Evil Dead , as well as cyborg zombies and more. Each issue feels different to what has come before and it is fun to see how the heroes get around in each reality. Humour often comes from the interactions characters have with the various people they meet, such as the reactions of Machine Man, Howard, and Hurricane (who joins the two along their adventure) after discovering in the fifth issue a world where superheroes and supervillains don't exist. 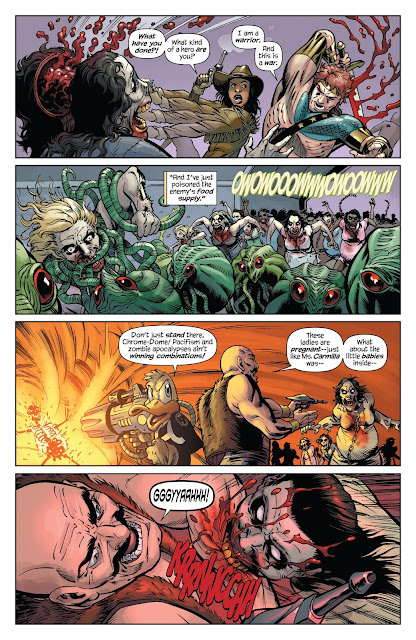 This felt like a beefy graphic novel and took a fair while to read. Each issue seems to have a different artist, with the art varying between decent enough and a bit scratchy. There wasn't bad art here, but often it seemed either a bit too bright and colourful, or had a strange unfinished look to it. Throughout though there is a huge amount of zombie violence which of course was great to see. There are ravenous zombie babies, armies of demonic ghouls, and no end of the creatures getting ripped apart in a variety of gruesome ways, replete with plenty of blood. Marvel characters pop up throughout and it was fun seeing the alternate versions of these characters, such as Arno Stark, a descendant of Tony Stark appearing in the cyberpunk reality, and Killraven in the War of the Worlds reality. This review really is just turning into a checklist of all the various things I saw throughout my journey.

The story itself both benefits and suffers due to being self contained within a single issue. I liked the pulpy feel of how action packed these could get, it made them feel like a whirlwind of excitement, even if everything that happens is surface deep. It was like the comic book version of an anthology, and so I was always excited to see what would happen next. I found it a bit disappointing to see that there was no resolution to the story overall, after the fifth reality is finished with the comic just ends, no epilogue showing the characters returning home, and whether a vaccine could actually be created.

With this, the final numbered Marvel Zombies graphic novel it was good to see the writers really go all out with a story that doesn't take itself seriously at all. The stakes have never been lower, but this goofy and weird collection was endlessly inventive, and was a surreal way to end the series. I say end, but there are a few more in the series for me to get through before my personal journey through the violent world of Marvel Zombies is over.