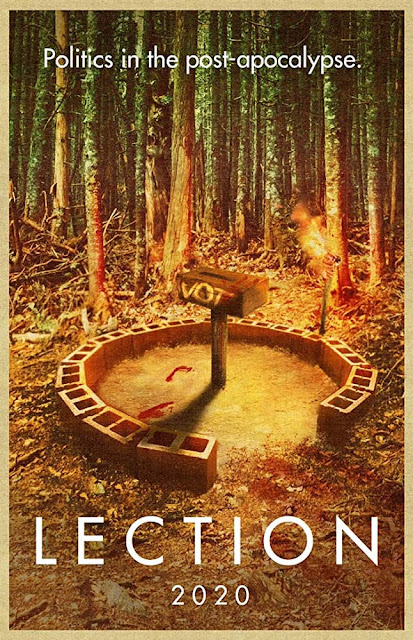 Lection is a post-apocalyptic thriller that was written, edited, and directed by David Axe. I loved his previous film Shed and so was interested to see just what he would do with a film as strange as this one. Due to the subject matter I assumed this was a short film, so upon sitting down to watch it I was a little bemused to see it was around 100 minutes in length. Lection is such a strange idea that I feel I may struggle to write a coherent review of it.

The film takes place in a small woodland community many years after some sort of apocalypse swept the world. The village has been ruled over for many years by Mayor (Mike Amason - Shed), who along with his henchmen keeps order, and provides sustenance in the form of rationed bread (or 'bred' as it is called here). However with the ration increasingly getting smaller a protest breaks out, which results in Mayor calling for an election ('lection') to allow the people to decide if they still want him in power or not. The only candidate is Dot (Sanethia Dresch - also Shed as seemed to be many of the cast members). Over three days the two sides campaign to see who will be the next leader, but in a brutal post-apocalyptic world strength often works a lot better than words... 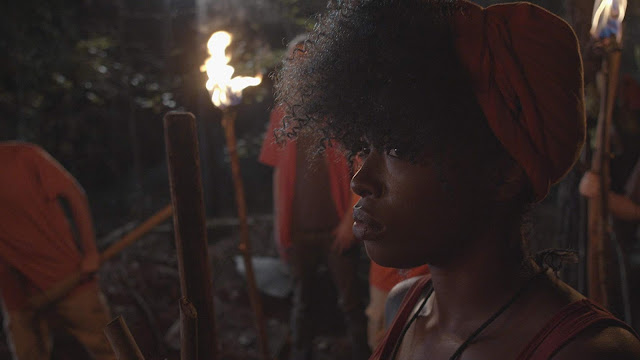 While it is never specified just how long after apocalypse this takes place in from the way characters talk and write it seems it is quite a while. Dialogue in Lection is extremely minimal with often only single repetitive words being spoken by the cast, and it indicated the art of reading and writing is being lost. There is the occasional sentence being spoken but the majority of the time it is so simple as to be understood in any language, at least in what is being indicated. On the one hand this really works for the film, it dilutes the meanings so that the main story is very easy to follow. It helped make this indie film world feel more real, something isolated from the real world. But it also leads to a little bit of monotony and I found myself more than once wishing there was more dialogue as the woodland setting and the lack of too much happening occasionally made me feel a little tired. Even though it could sometimes be a little dull I was still fascinated with the feel. I liked how there was a semblance of society and law and order, but how twisted it had gotten, with violence never far away from the facade of rules.

With dialogue at a minimum actions spoke a lot louder than words and Amason was the stand out character here. I loved the look of him, but also how much him, and many of the other actors acted without using words. Bradley J. Petit as henchman Guff was another character who stood out so much, again due to costume choices, and the subtle facial expressions he provided. With all this silence there were some elements of the story I didn't really understand, ones such as a subplot involving a henchman of Mayor gone rogue I struggled to follow. As to the message of the film as a whole I'm not politically minded so I am sure it was lost on me. It seemed to be about how you can't really get into power unless you are able to bend the rules, and that the grass may not always be greener on the other side. With Dot she initially appears to be a protagonist to root for, yet her path takes her to some dark places with change not really appearing to be what it felt it could be. 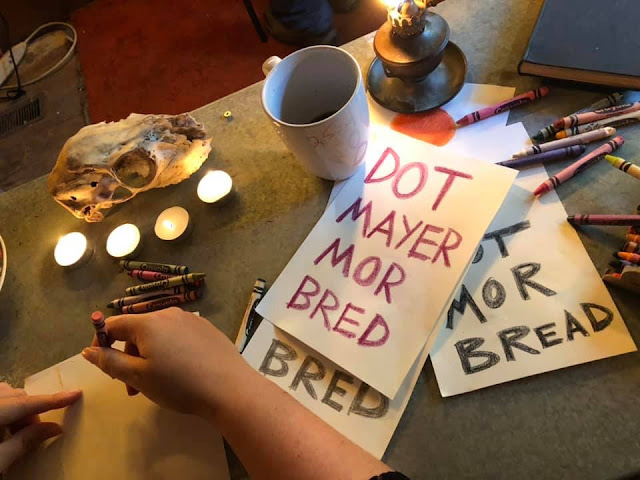 Being post-apocalyptic means there is plenty of opportunity for violence, and that comes in the form of more Mad Max style moments, such as fights to the death using home made weaponry, and even the race for the ballot box itself, which here is shown as a literal race, with participants fighting each other to be the first to get their name in the 'pol' box. These moments of violence are spaced out with there never being a constant threat. The effects are minimal but the blood looks decent enough. With the sound, much like with Shed there were some technical issues when characters spoke and I struggled to make out what was being said, but a reduced dialogue meant that only happened once or twice. In terms of the music though this was another David Axe film that had great design. The music here was a highlight for me, from almost eighties style synth, to the constant appearance of drumming that looked to be played on screen by characters, and which added tempo and urgency to scenes.

Lection won't be for everyone, it can be a little bit slow paced in its story, and sparse in its look, and the lack of dialogue may well put some people off. I found the unique way it is laid out to really make it feel like something far different to anything I have seen lately. The setting may be different to what we know, but the more things change the more some things stay the same, especially when it comes to politics.

Posted by Daniel Simmonds at 07:27