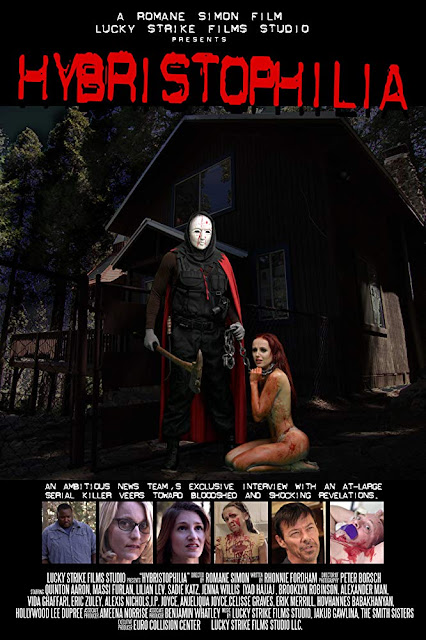 Hybristophilia is a paraphilia in which sexual arousal is gained from being with a partner known to have committed an outrage or crime, such as rape, murder and robbery. It is also a horror film from director Romane Simon (Blood Runs Thick, The Dawn of Zombie Apocalypse), that has a story written by Rhonnie Fordham (Blood Runs Thick). It aims to get inside the mind of a notorious serial killer and explore just what it is that made them kill.

Reporter Mary Lee (Jenna Willis - American Crime Story TV series) and her crew, consisting of cameraman Tommy (Quinton Aaron - The Blindside) and her sound engineer Brian have closely been following the exploits of the notorious serial killer known as the Sleepy Stalker (Lilian Lev - Blood Runs Thick, Tales of Frankenstein). She receives an email from the killer who has been following her work and wants to give an exclusive interview, so her, her crew, and pregnant psychologist Celeste (Sadie Katz  - Bus Party to Hell) head to the spot that the killer has chosen with the hopes that it will make their careers. However upon arriving they all get drugged, and wake to find themselves tied up. Despite these restraints the interview goes ahead, with the killer willing to tell her story of what made her into the person she is. 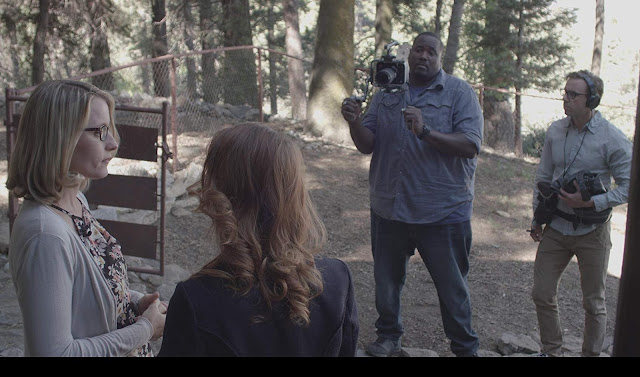 This all started off pretty well with a montage of news reports and murders to show the impact the killer has been having. By the time the crew get tied up I was expecting some sort of torture porn film along the lines of Truth or Dare but this turns into something quite different. With everything being filmed by the cameraman on screen this could have easily been a found footage and shown events from Tommy's perspective. Instead this plays out as a more traditional movie with the killer showing the others around the house she grew up in, while diving in to moments of her life that shaped her. This takes the form of a series of flashbacks, such as when she was a child living with her parents, to being a teenager living with her abusive uncle, and all the way to the point of her first kill.

For me where Hybristophilia started to fall down a little bit is with the introduction of the killer herself. She wore an outfit consisting of a red cloak, and white featureless mask that reminded me of a magician, this feeling was added to with the dramatic way the killer moved around. As such I didn't find her intimidating and so struggled to feel any real threat for her semi-captives, despite their reactions often being fearful. I found some of the characters to flip around between emotions in a way that didn't feel too realistic. Celeste for example often acted terrified one moment, sad the next, then angry, all within the space of a few minutes making it a bit confusing understanding the characters mindset. The characters of Brian and Tommy felt a bit underutilised, only really bringing some comedic relief every now and again. It was the killer, Celeste and, Mary Lee who are the real focal point. This gave the film a feminine angle, and it is true that the female cast are far more involving and interesting than the one note males, though this powerful woman vibe is balanced with a needless sex scene with two random girls at the start of the films prologue. 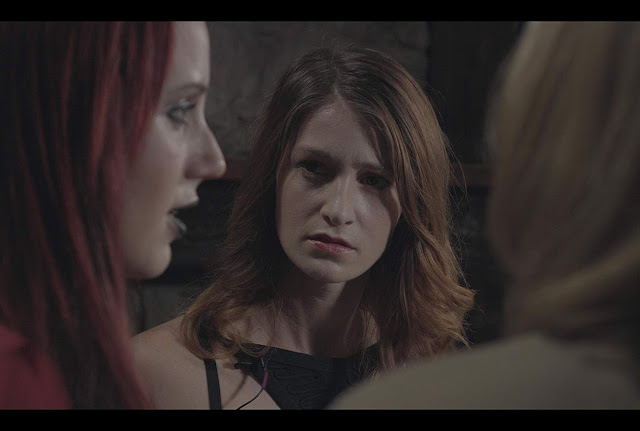 Special effects are minimal, but there are some fun moments of death to be found here. A part involving a frying pan in a flashback worked due to the amount of blood being flung around, and there are a fair amount of kills, even if the majority are during the initial montage. Occasionally blood spurts are done via CGI, these were always quite obvious but were fine enough. The sound on the other hand occasionally ran into issues with the music being louder than the dialogue characters are speaking. At times I would have to strain my ears to hear what was being said, then a scene would change and characters were suddenly a lot louder. With the actual story though I enjoyed the set-up, interviewing a killer creates tension due to how unpredictable things could get, and here that doesn't disappoint with a finale that was all too brief, but was a fun way to finish things.

The idea behind Hybristophilia was a good one, and it was much better than I thought it may be. However I just didn't find the killer to be scary, and so with that issue alone my enjoyment of this was reduced slightly as I never felt any sense of peril for any character. Still, for being something a little different I found this to be an enjoyable watch..

Posted by Daniel Simmonds at 15:23