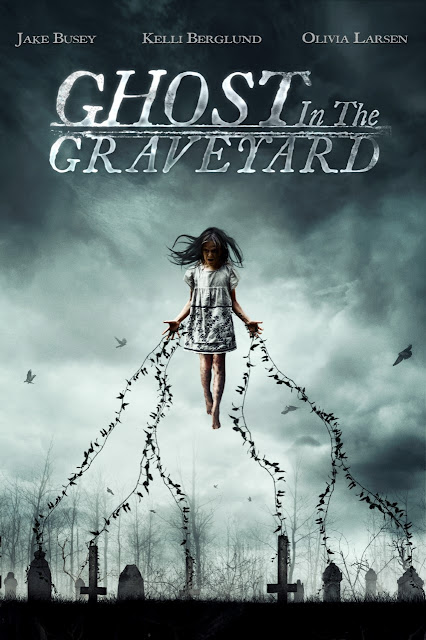 Ghost in the Graveyard is a horror that was the directorial debut of Charlie Comparetto who also wrote this. Initially it seemed like a typical teen horror, though one that was light on anything really happening at all. Around the midway mark it crashes into a different type of movie altogether, and while I lost the threads of the plot it at least become a lot more interesting to see.

As a child Sally (Kelli Berglund - Now Apocalypse TV series) witnessed the death of a young girl, Martha (Shiloh Verrico) while playing in the graveyard in the town of St. Moriah with some friends. After this she moved away, and now as a teen she has returned, living with her father Charlie (Jake Busey - Stranger Things TV series, The Predator), her brother, and a random baby. Returning to the town though she starts to glimpse sightings of the ghost of Martha, and before she knows it she is caught up in a struggle against the forces of darkness that includes secret societies, witches, and demonic possession...

For about half this film I felt like I knew what was going on. It was very slow going, and the script was pretty dull, but it seemed the story revolved around finding out just who Martha was. Then the little side plot elements come centre stage and the story goes bananas in a way that was enjoyable, but also ridiculous with how it all comes to pass. If it had stayed at the sedate pace of the first half this wouldn't be getting any sort of recommendation. After around forty five minutes a character has somehow been beaten to death with a baseball, and the creepy ghost girl has been glimpsed a few times and that is it. The second half includes among its crazy path a stolen ambulance, a shotgun rampage at a graveyard, unstoppable possessed people, and a plan to bring about the end of the world. I found myself enjoying this a lot more when I stopped struggling to understand what was going on and just watched the spectacle of it all, but I think it was a complaint of the writing that the story was so hard to follow.

The acting was mostly fine enough, no one really had stand out performances, maybe Maria Olsen (Paranormal Activity 3, American Horror Story TV series) could have done if she had been granted more than a few minutes screen time, as I liked everything she did here. Sally was a dull protagonist, but all the teens in this film fitted into the 'bored teenager' stereotype so none of them had anything to them. This led to the subplot revolving around Sally and her love interest falling flat as there was no chemistry at all between them. Verrico though, she was a decent creepy kid, she never irritated, but I didn't really know what her overall relevance was. It is less to do with the actors and more to do with the lines they had. Some key bits of plot development get done via conversations that sound silly as an outsider, yet characters in the moment accept the absurdity of what is being said without any kind of hesitation.

For all its faults it does at least improve a lot towards the end. Special effects are mostly minimal, but this still has some blood in it, and some suitable black eyes to indicate the possessed. The camera often stays out of shot for anything too gruesome going on. On screen we get characters coughing up blood, and getting attacked with various weapons, but usually the start of an attack will signal a scene change.The directing here was decent, the camera quality was good, and the soundtrack inoffensive, with the story it felt that 90 minutes was somehow too long for the story being told, a story which is indicated at the end to just be the prelude for something bigger to come.

Ghost in the Graveyard featured some notable actors, it was nice to see them, in terms of the film itself I didn't think the story was very well explained or handled. But at least, as confused as I ended up the onscreen antics gets more fun. Ghost in the Graveyard was released onto digital platforms (Amazon, Hoopla, Vimeo on Demand, FANDANGO) by DarkCoast on November 5th.