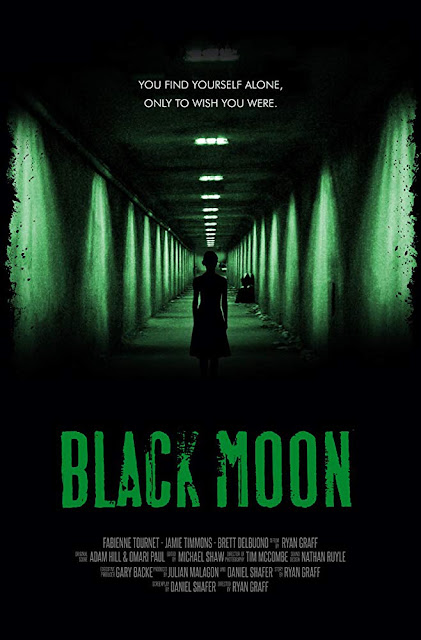 Black Moon is a short eight minute horror that was directed by Ryan Graff (who also came up with the story). Apparently a 'black moon' is what occurs when there are two new moons in the same month, and is meant to be when supernatural occurrences become more common.

A young mother (Fabienne Tournet) is walking home one evening when she hears crying coming from a tunnel under a road. She sees a young girl crouched down sobbing, and so decides to go and see if she can help. This simple act of kindness takes her on a path straight into her worst nightmare...

First off I loved the atmosphere here. The night time setting, along with the empty streets means that I was on board to be scared here. While I did enjoy this, the camera mostly stays firmly centered on the woman, who reacts to things occuring off screen. I am sure this was done with the old adage that what is created in your mind can be more frightening than anything shown (as well as to save on budget). This is a short film with just a few tricks. When the main one is a woman looking scared as a camera keeps swooshing past her, then despite the short length I began to wonder if there would be anything more to this.

That isn't to say I didn't like this, the ending was predictable but fun, there are decent horror elements, and I did like Tournet's acting. One part where her mobile phone loses battery and turns off mid call she says "oh no" in a disappointed voice, but the weird way she says it made it seem like a natural response rather than just acting. Black Moon started off strong, and it ends decently enough, I just wish there had been more going on in the middle section.

This short horror had atmosphere in spades, a good performance from someone who didn't have much to work with, and some strong camerawork. For me personally I would have liked more to happen in the middle section, but overall it was a decent film. Black Moon had its premiere at the Morbido Film Festival in Mexico on November 2nd.