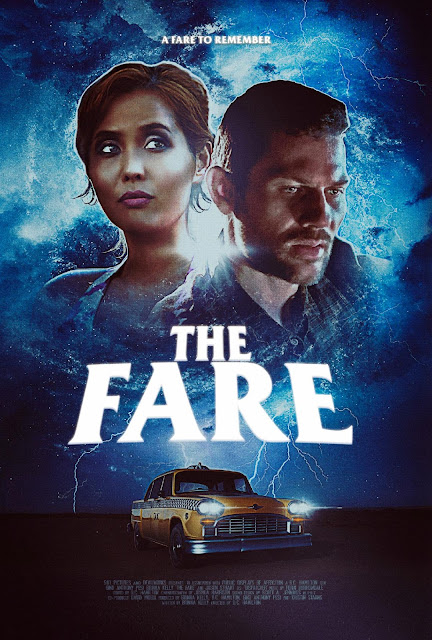 I really loved the idea behind the D.C Hamilton directed mystery romance thriller The Fare. It falls into the sub genre of the Groundhog Day style repetitive time loop, though this time taking place entirely in a taxi, and the loop lasting all of twenty minutes. While this is not exactly horror it does have its moments, and blends together a romantic storyline with these elements.

Harris (Gino Anthony Pesi - Battle Los Angeles) is a taxi driver who has been sent by his dispatcher (Jason Stuart) to pick up a fare out in the middle of nowhere. He discovers a woman named Penny (Brinna Kelly - The Doll Collector, and who also wrote this) and they immediately have a connection. Twenty minutes into the journey Penny mysteriously vanishes, with no explanation for this occurrence Harris is told by his dispatcher to just reset his meter and head back. After resetting the meter Harris is once again on his way to pick up a fare out in the desert in the middle of nowhere, again his passenger is Penny, and the same thing occurs time and time again. Slowly Harris begins to realise he is stuck in a time loop with the woman, who also is aware of the phenomenon, together they try and find a way to break the cycle, but slowly start to fall in love as they do so. 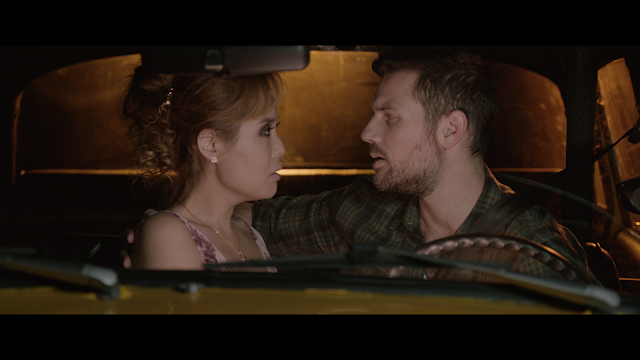 I do love time travel and time loops in different types of media, from the obvious Groundhog Day and Happy Death Day, to the Black Mirror episode White Bear, and the Netflix show Russian Doll, this is a concept that works a lot, especially with horror. I liked how The Fare does something a little different, it felt unique that the character stuck in a time loop doesn't initially even realise he is in one. I had also not seen one of these types of idea set over such a limited scope as well. Nearly the entire film takes place inside the taxi cab, while being out in the desert there is nothing to distract. Instead you are brought into the dynamic between the two main characters. This is at its best when it is pushing the boundaries of the mystery of the loop, Harris trying to find ways to break out of the cycle, and the more horror based elements that comes from this. There was a lot of mystery to it all, I feel it could work if this was never explained, but here there is a pretty detailed reason revealed for just what is happening, with the film even carrying on a good ten to fifteen minutes after all the answers have been provided.

The main meat of the film is the relationship between the two, and with Pesi and Kelly you have a likeable and attractive cast. The romantic angle of these characters slowly getting to know each other and making the most of the never ending loop was one I found interesting, and certainly helped along by the score. Occasionally it did get nearly a little bit too soppy, but both characters were good ones to spend time with. It did feel sometimes like this would have worked better as a short film rather than a feature length one. Running at 82 minutes there were some moments that felt a little dragged out. Just past the first montage of the two characters falling in love I started to feel there wasn't really any further the film could go in, I wondered what could occur to mix things up. Sometimes I wished the horror elements were a little bit stronger, as they are definitely there at times even if that isn't the aim of The Fare. 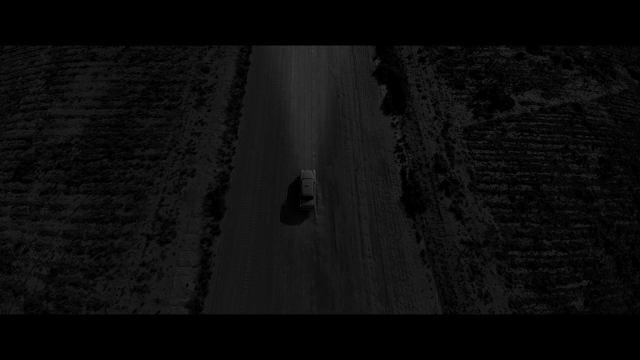 This has minimal stuff outside of conversations, but there are some nice outside shots of the taxi driving down dirt roads, and the thunderstorm that signals the ending of the current loop looked good. There was some playing with the use of black and white and colour. To begin with the film is in black and white, giving it a vibe of The Twilight Zone, but eventually the film blossoms into constant colour, the awakening of Harris to being in a time loop awakens him, and with it the colour comes. Going back to The Twilight Zone this would have fitted very well into the series, the story here I could easily see being a good fit, I admit towards the end during a moment of down time I even spoke out loud with my own little ending narration I made up. The film is complete with its own twist which made for a neatly tied together plot for something that felt like it wouldn't have a satisfying resolution.

The Fare was an immediately engaging idea, and one that despite a minimalist setting had me glued to the screen. On occasion the idea did begin to get a little stale, but this was only a couple of times. While there wasn't much horror here the central idea worked, and the love story was one I enjoyed due to having elements of loss and sorrow to it. The Fare comes to Blu-ray and VOD on November 19th.