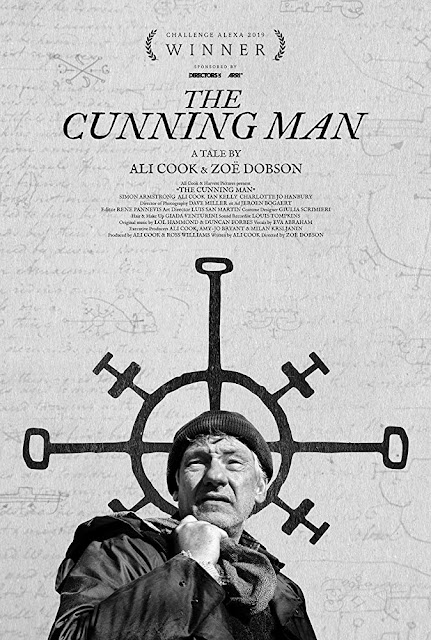 The award winning The Cunning Man is a short fantastical film that was directed by Zoe Dobson, and written by Ali Cook (who also appears in a role here). While it is not horror, it is instead based on folklore, and specifically on a man from history - John Harris, who lived in the late 18th and early 19th century who was known as a 'cunning man', and who is said to have used folklore magic to heal.

Afran Harries (Simon Armstrong - Game of Thrones TV show) spends his time gathering up animal corpses out in the countryside. The local knackerman (Cook) comes up with a plan with a friend to swindle Harries out of the corpses he has collected, so that they can sell them for a profit. However, Harries has his own ideas for exactly what will happen to the animals...

This is just over twelve minutes in length and was shot with a lot of care and attention. The rural setting, as well as the cast combine to give this a realistic feel that plays well with the more magical elements of this. This had some nice cinematography to it as well with some well framed shots, such as the pile of animal corpses, and the whole set-up of the ritual to be performed. It made a change to have something that could so easily have been horror not go down that route, and while I did expect something different I was pleased with how this all turned out. There is a limited cast but all were excellent and fitted the roles they played well. I also liked the use of music, during one particular moment the music cuts out entirely to build tension, and works as intended.

The Cunning Man was a wonderfully shot little film that worked as a cohesive package. This was a perfect length with everything included being essential to the tale of selflessness vs greed. The Cunning Man premiered at the Morbido Film Festival on 1st November.