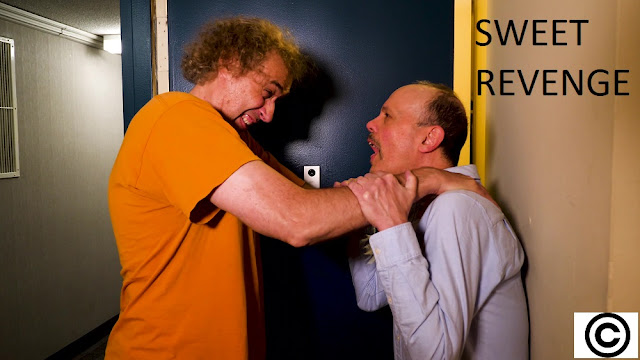 Sweet Revenge is a seven minute short horror that has elements of comedy to it. It was directed by Ron Millkie who is best known for his role in Friday 13th as Officer Dorf, and was written by Phillip Pitta and Joseph Stabile, with Pitta also starring here.

Pitta plays Jim Hanover who several years in the past was a key witness to a brutal attack by Luke Briar (Nicholas M. Garofolo - Deranged Foxhole). Now the man has been released from prison and wastes no time in telling Jim that he is coming for him.

I liked Garofolo's role as the detective character in Deranged Foxhole, so here it was fun to see him in a more evil role as the deranged Briar, he had a good line in manic grimaces that brought some humour to what happens here, and his size made him quite imposing. The story itself is a simple enough one, but it is told in a decent fashion. Technically this wasn't bad, though some audio sound issues with background noise popping up whenever anyone speaks. On the subject of sound though the music here really added some atmosphere and tension.

The story for Sweet Revenge may not go anywhere too surprising but it was competently done, and I found myself enjoying this revenge thriller. A fun performance by Garofolo makes for a thriller worth the time.