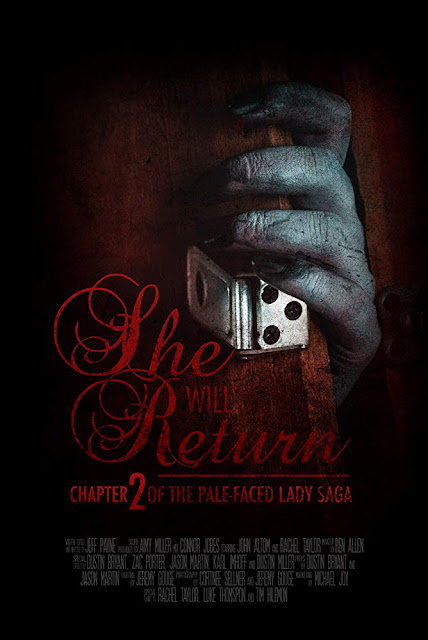 She Will Return is chapter 2 of Jeff Payne's The Pale Faced Lady saga, the first part being released back in spring. While I liked the idea behind that one it did feel a bit traditional in how it was set out. Also it didn't really tell a story in a satisfying way. Despite some issues I had with the camera work it was still fairly decent, thanks to Payne's sublime editing skills. She Will Return tells somewhat of a more rounded story.

John L. Altom (The Stranger TV series) stars as Father, a man who not only lost his wife due to an accident, but who has recently lost his only daughter (Rachel Taylor). He stays secluded in his remote dilapidated home, yearning to be able to see his daughter one last time. However he really should be careful what he wishes for...

Again here the editing is wonderful, there is an added injection of art-house style quick edits of the daughter while she was still alive that I found to be very effective. I also enjoyed how the pale faced lady is hidden in the background of many scenes, similar to what they did in The Haunting of Hill House. It made for some creepy visuals, especially when she is in the background of scenes Father is also in. I also found the whole after credits sequence to be fantastic, it was the highlight of this ten minute short for me, and had genuine moments of horror. I did feel that the majority of this, like The Pale Faced Lady before it was a bit underdeveloped, while I liked how this was made, not much really happens. It seemed like this ended just as it was really getting started. It does seem to tie into the first film in a clever way though so watching that first will add a bit to your enjoyment of this. This is a part in a saga, however many shorts that turns out to be, but I still would have preferred a resolution, rather than this feeling like it was a slice out of a bigger plot going on.

The quality of She Will Return is obvious to see, and from a directing and cinematography perspective the films of Payne will always draw me in like a moth to flame. The story itself though I felt to be the weakest part, it can sometimes feel traditional to a fault. Saying all that I do eagerly await to see where this goes next, colour me interested. Check it out for yourself below.