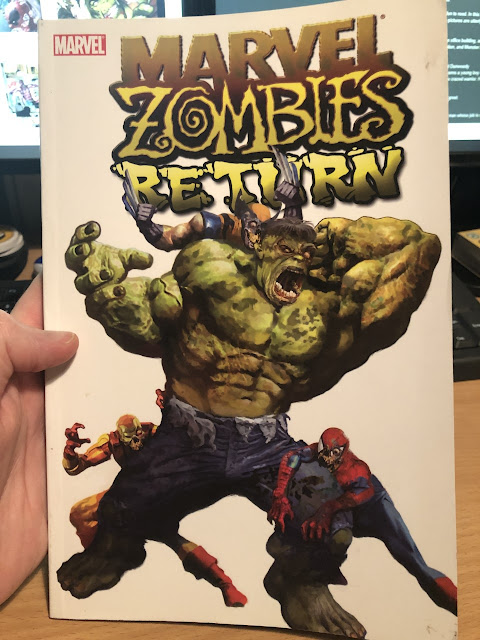 I am still working my way through the various Marvel Zombies comics and my latest one to be read is Marvel Zombies Return. While Marvel Zombies 3 and Marvel Zombies 4 were canological they took place in the main Marvel universe. With Return we fittingly return to the main story of the zombified Marvel heroes of Earth-2149. Spoilers for previous entries to follow of course.

At the end of Marvel Zombies 2 Malcolm Cortez teleported the surviving super zombies to an alternate universe. The anti-heroes made up of Spider-Man, Wolverine, Giant-Man, Wasp, and Luke Cage all end up on Earth-Z. Return takes place over five issues, with different artists and writers doing each one. In issue 1 undead Spider-Man sets out to find a totem said to grant immortality, and ends up getting caught in a battle with Kingpin and the Sinister Six. Issue 2 takes place two years later and sees zombie Giant-Man heading to Stark HQ in order to find some technology that will allow him to power a dimensional teleporter.
Issue 3 takes place two years after this, in Japan and sees zombie Spider-Man teaming up with Wolverine and Kitty Pryde to take on ninja group The Hand and zombie Wolverine. Issue 4 has Hulk returning from his banishment in deep space, he ends up getting infected, and after teaming up with a newly zombified Sentry they set out to consume Earth-Z. The final issue takes place many years in the future, with Earth-Z destroyed, zombie Spider-Man teams up with a new band of Avengers in a last ditch battle to stop the zombie plague once and for all.

This collection covers a lot of ground, and it was refreshing to get away from z-list heroes and get back to the more well known ones. The new dimension leads to some neat ideas, such as normal and undead versions of heroes battling each other, such as Wolverine vs Wolverine in issue 3, as well as 'resurrection' of previously killed heroes, such as Hulk returning. I felt that the wiping out the world part of the original comic series was a bit rushed, so it was nice to see this play out again, even if there is a huge leap from issue 4 to issue 5. I enjoyed the stories in each of them, though issue 3 was the low point for me. I found the art to be a bit grimy and dirty, but then issue 4 went slightly too far the other direction with really cartoon like art used, a bit too sterile and clean. 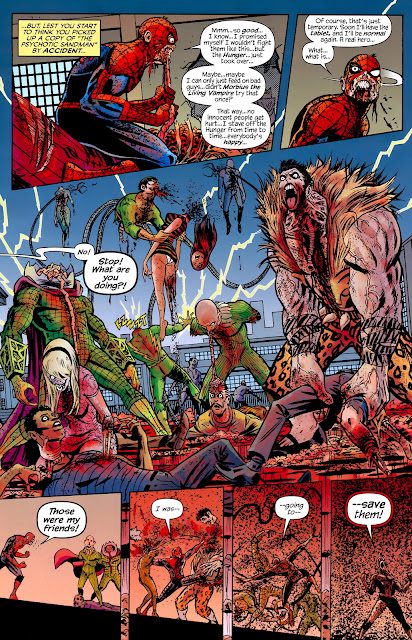 There is lots of zombie violence on show here with some pretty messed up ideas. Take Spider-Man for instance, no longer able to look at himself due to the things he has done he literally peels off his face so that he can't do that. Then there is the fact his spider web no longer works so instead he shoots out his arteries to swing by. Then there are the deaths, such as when Sandman causing someone to explode by filling up their belly with sand, and plenty of people being ripped in half. It is all violent in quite a dark way for such an often bright and colourful looking comic. It was fun to see heroes missed the first time around get more time to shine, what has happened to Professor X was a cool detail. On the other side to that though it was a shame some of the returning heroes barely feature. Both zombie Wasp and Luke Cage only get one or two panels each. The story all gets wrapped up in what was a very action heavy finale that surprisingly did an admirable job of clearing up the series and putting a firm end on things in a clever way. More comics in the series did follow, but this was the first time a real ending was attempted.

With Marvel Zombies Return you get a lot of value. As well as five wildly different looking stories (including one, issue 2 that was written by David Wellington of the Monster Island series of novels) you get the usual cover posters at the back, but also a fair number of interviews with people who have worked on the series over the years, it was interesting getting their views on being approached to contribute to this violent series. With the different stories skipping around time I did feel like I had missed some vital story moments in between them, but overall this was a neat almost anthology like collection that is the perfect stopping off point for the wild, wild story of Marvel Zombies.