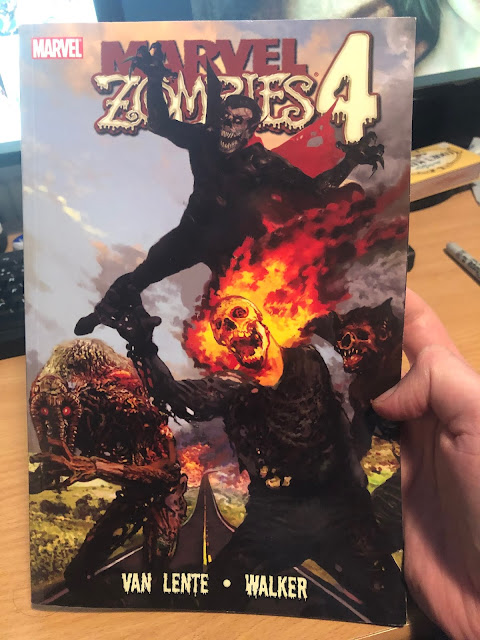 Earlier this year I was happy to discover that in the years since I read the first couple of Marvel Zombies a lot more of them had appeared. I excitedly snapped up as many as I could find...and then promptly didn't read them. Now with a blissful week off of my day job I have returned to this cool series once again. Marvel Zombies 4 is a direct sequel to Marvel Zombies 3, and again takes place in the main Marvel universe.

After the events of the last graphic novel, in which the invading creatures from the Marvel Zombies universe were wiped out at the A.R.M.O.R (alternate reality monitoring and operational response) HQ it is discovered that one of the zombies managed to escape. Deadpool, now reduced to just a head had been rescued by Simon Garth, who himself is also a zombie, though one created by Voodoo magic. The two of them end up at the base of Black Talon, who recognising the deadly power of the virus that Deadpool is infected with intends to sell him as a weapon to The Hood, who is secretly being controlled by Dorammu. Meanwhile a special A.R.M.O.R team led by Morbius, and calling themselves the 'Midnight Sons' head out to find and destroy Deadpool before he is able to infect anyone else.

The previous Marvel Zombies story seemed less complicated, this time around there are a few different moving parts. Again the cast are mainly made up of obscure Marvel characters, referred to as Z-list within the novel. As well as the vampire Morbius you have the werewolf Jack Russell, the witch Jennifer Kale, the Satanist Hellstorm, as well as Man-Thing. As usual I class any Marvel characters who haven't appeared in recent films as obscure ones, but even here with these it seems there is some admission that some of these are quite unknown. Simon Garth was a character created in the 1970's, he fits well being a zombie, after the main story that takes place over four issues there are also three additional stories - Altar of the Damned!, Zombie! and Night of the Walking Dead which are all reprints from Simon Garth's original appearance in Tales of the Zombie. 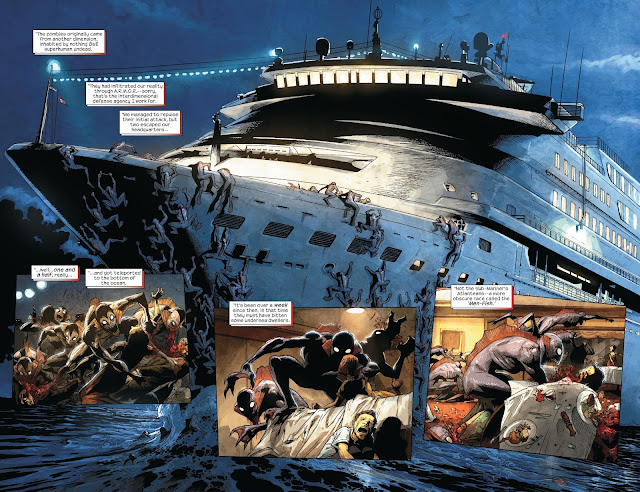 I thought the story was more interesting than the previous entry, and it is an evolution of the main story in that the Marvel Zombies virus manifests itself in a different form than before. This makes for some striking panels bathed in red, as a later development is that virus infused red rain begins to fall over an island. There are lots and lots of undead here, made up of both fish-men ghouls, as well as normal zombies. This made for some gory and bloody scenes of action that had more of a horror oriented angle. The idea to use the monsters of the Marvel universe rather than the more traditional heroes lent this story more of a horror feel. This doesn't affect Deadpool though who maintains his wise cracking ways regardless of what is going on. The art by Kev Walker in particular was very strong for this, it has plenty of large panels with plenty of colour to them. The three Simon Garth stories after the main one are in black and white, but maintain a dark tone to what happens in them.

Each additional story in the Marvel Zombies saga features more and more obscure characters, but due to the art and the story itself I was still very interested in this. I liked the idea of a team of monsters teaming up to fight undead. Some elements of this really make me wish the original novels had been more heroes versus undead rather than undead heroes versus world. Still we are finally getting more of that now, so as always I am interested to see where this wonderful series ends up next.