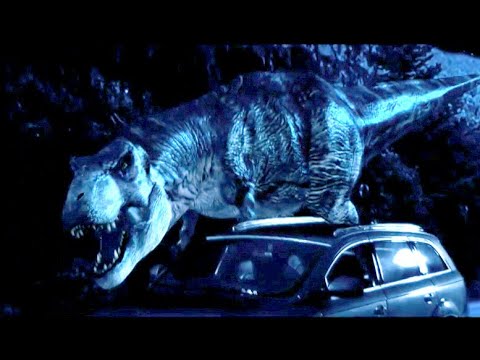 Andrea Ricca excels in making short sci-fi and horror films, many of them only a few minutes in length. At first glance they don't look great, featuring basic CGI and often telling a very similar story. Dig a little deeper and it becomes more impressive when you take into account that Ricca creates these almost completely by himself. Not only starring in the majority of them, but being responsible for the creation of the CGI and most other aspects.

In Jurassic Night there is an accident at a genetics company, resulting in the dinosaurs they had created getting loose. A man (Ricci) discovers this, and soon arms himself with a pistol and brings the fight to the escapees, taking on raptors, and even a T-Rex as he does so.

This is two and a half minutes of madness, with the nonplussed man fighting a variety of Playstation 2 era computer generated dinosaurs. These creatures never look like they fit into the real world they inhabit, and there is some lighting issues on them that make them stand out even more. Also the plot is a comfortable one, seen in many of his other films such as Spider Danger, Aliens Night and The Giant Scorpion. With Ricca's films you come to expect this though, it is part of the charm for this self created style of movies he makes. The D.I.Y attitude cannot help but be charmful, there is something endearing about watching these, that are always made to entertain first and foremost. I could watch these all day.

Posted by Daniel Simmonds at 14:57