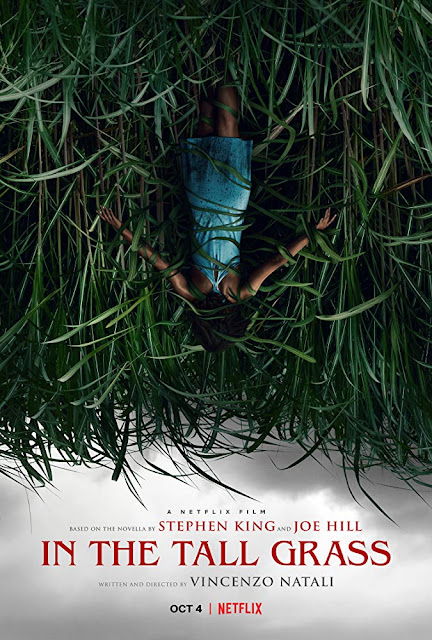 I have said it plenty of time before, but I just am not a fan of Stephen King's writing, yet this year has been a good year for films of his work with Pet Sematary, It: Chapter 2, Doctor Sleep and this Netflix adaptation of In the Tall Grass. The film is based on a novella King wrote with his son Joe Hill. This is directed by Vincenzo Natali who I was not surprised to discover was the director on Cube, as this feels very similar to that cult classic at times.

Siblings Cal (Avery Whitted) and his pregnant sister Becky (Laysla De Oliveira - iZombie TV series) are travelling across America, and their journey has taken them to Kansas. While stopped briefly by a huge field of tall grass the two hear a young boy shouting for help, saying he has been trapped in the field for days and has been unable to find a way out. As he doesn't sound that far away Cal and Becky head in to find him, but soon not only get seperated from one another, but also discover that they too are now trapped, somehow unable to find the route back to the road. They, and a few others also lost discover the field has the ability to bend not only space, but also time... 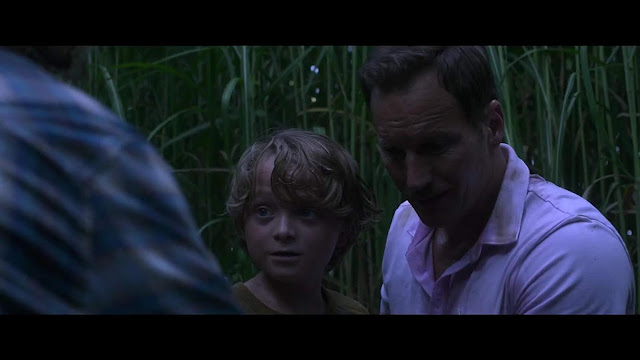 Curiosity was the biggest factor in me deciding to watch In the Tall Grass, I just needed to know not only how this could ever work as a feature length film (101 minutes in length), but also what on Earth could happen to keep this interesting. With Natali as director you have someone who must be used to making use of a limited space, and making it seem like it is a much larger one. With Cube each section of the cube was just the same set lit differently, I imagine the field of grass was also utilised in a similar fashion. That series is something I will just keep on going back to as I really was reminded heavily of it. Not only with everywhere looking the same, but the time loss element reminded me heavily of Cube 2: Hypercube, with characters running into past and future versions of themselves. To help create the enormity of the field of grass there are many drone shots used, the wind on the grass often makes it seem like a living entity, most successful when the camera flies up from a character to give the impression of the grass swallowing them.

There is a small cast of six main characters, the dynamic of the siblings lent me to guessing some of the mysterious backstory as to why they were on a journey. These two are joined mainly by Travis (Harrison Gilbertson) whose character brings with him an evolution in what the viewer knows about the situation. They are also joined by Will Buie Jr. as the young Tobin, whose character at times verged towards the stereotypical creepy kid, but actually became not that bad, and the wonderful Patrick Wilson (Hard Candy, Insidious, The Conjuring) who plays the role of Tobin's dad, Ross. This later character was maybe the weakest of the characters, much more to do with the character itself rather than any issues at all with the acting. This small cast do an admirable job of keeping the events interesting, and with not much visually to look at other than the titular tall grass the focus is very much on them. 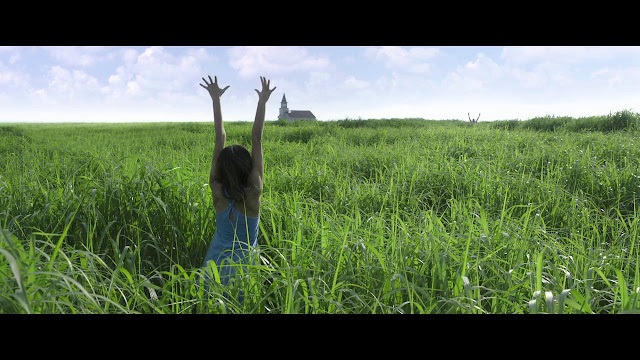 So is a film about a field of grass actually scary? Well, yes and no. I loved the idea and the mystery and unsettling nature of it worked wonders. There was a point though where it started to feel like it was running out of ideas a bit, especially during the third act when it all gets a bit overly dramatic with mud stained characters running around shouting. Sometimes the logic of the film seemed a bit wooly, especially with how it all ends, yet it managed to save itself from going too far in a silly direction. There is an explanation of sorts for what has happened, the usual King way of ancient places from pre colonial America having otherworldly powers. There is the occasional dream like sequence to physically bring in more supernatural elements, such as people made out of grass, and some nice looking effects when blood bleeds into the sky to make it crimson, but usually the characters working out the rules of the field is the part where I was most drawn in.

I'm glad I decided to watch In the Tall Grass, it is successful in somehow never getting dull, while the comparisons to Cube were a welcome discovery. Not much too drastic really happens here, but it was entertaining, and I left mostly satisfied. In the Tall Grass is currently available to watch on Netflix.

Posted by Daniel Simmonds at 06:45