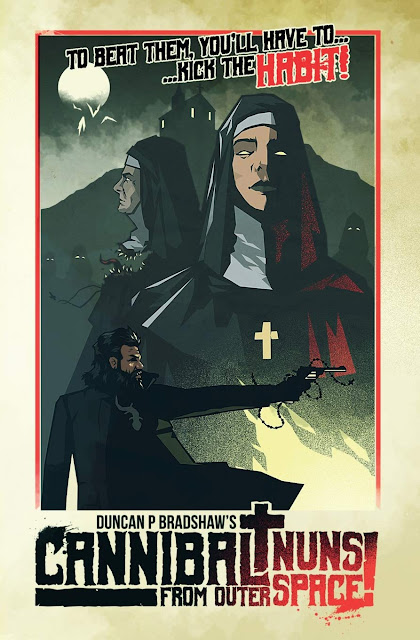 There was a time in my life when I read a lot of books, so many in fact that I felt it was even worth mentioning on my CV. Nowadays I rarely manage to finish three in a year, something which I blame squarely on video games, I am just an innocent pawn in the ever increasing length of those damn addictive time sinks. Still, that didn't stop me from picking up the special edition of Duncan P. Bradshaw's latest comedy horror novel, Cannibal Nuns from Outer Space! I really enjoyed his zombie novels Class Three, and Class Four: Those Who Survive, and with the title alone I knew this new one would be something I would also enjoy.

Father Flynn is a member of The Order of The Crimson Rosary, that deals with the more supernatural aspects of the Catholic faith, from exorcism, to judging the apparent appearance of miracles. After a series of embarrassing incidents stemming from an over reliance on alcohol, and an inflated opinion of his own judgement and abilities Flynn is given an ultimatum. He can either return to his old job of maintaining the last microfiche machine of the Catholic church, or he can go to St Judas's for rehabilitation. He decides on the later, which takes him to a sleepy Welsh town, which coincidentally is also where a group of cannibal nuns from outer space have chosen for this years harvest of humans. Flynn eventually becomes aware of the aliens plot and sets out to stop them, along with the help of his rival O'Malley, as well as a demonic creature living in his beard, and a few other odd sorts.

This all starts off extremely silly, with a most ridiculous introduction to Flynn that takes the form of a botched exorcism. Compared to previous books I have read of Bradshaw's this felt more stupid than usual, meant in a positive way of course. While the level of absurdity does simmer down a little bit as the story progresses there were plenty of moments throughout that make for entertaining reading. Reading this I was reminded of golden era Robert Rankin in the writing style, things such as small tangentially related stories being narrated by characters, and recurring oddballs with twisted aspects to their personalities (such as the 'Welcome Nun' and Ian the taxi driver who is endlessly accidentally running over anyone, or anything that happens to be remotely near his taxi's path). This is different though with the level of violence that is put into his stories. I first noticed this with Class Four during a gory few chapters set in a twisted carnival. Then again, with his short story Q&A (from the horror anthology Trapped Within) which was nothing but extreme violence. Cannibal Nuns again features a lot of extreme body horror with plenty of descriptions of the nuns chowing down on victims (the alien's real mouths being around the chest area of the humanoid looking suit they wear). On more than one occasion, in fact on at least four occasions people get their arms bitten off which was always fun to see, can never be too many arms getting bitten off!

Special mention has to go to the books design, for the special edition at least. The cover artwork is striking, enough so that a colleague at work saw it and assumed I was reading a small comic book. Then there is the layout with this feeling like what a DVD would be like if it was transformed into a book. This even starts off with a humorous anti-piracy warning before going on to give a series of trailers for fake books that all sound amazingly stupid, such as Killer Bass, about a disgruntled sound engineer who alters the speakers in a nightclub so that the sound they create can kill. Then after the story has ended there are not only ending credits, but also a series of DVD equivalent extras that include alternate endings, deleted scenes, and even a directors commentary which sees Bradshaw writing about his influences throughout the 40 chapters of his story.

Of these cultural influences there are many, and from the commentary more than I even spotted. They range in size with some more obvious than others. There is a character called Yowder who acts and talks like Star Wars Yoda, though it was nice to see that Bradshaw states in the notes that he is based on the Yoda from the hilarious Bad Lip Reading 'Seagulls! (Stop It Now)' video. Then there is nearly an entire chapter that is basically a simplified version of the plot to Predator, with the alien replaced with a cannibal nun, and the soldiers replaced with children. What I enjoyed most about that one was how slow I was to realise this, it was only towards the end when the nun self destructs that I thought to myself "hang on a minute!". There are also more subtle references as well, such as the odd sentence or scene that nods at such things as Blade Runner and Kill Bill.

Cannibal Nuns from Outer Space! was a really entertaining read, I loved the twisted characters here, and the absurdities that make the world in this book so frequently funny, and while the many references occasionally feel like they are on the cusp of suffocating the reader, they never actually do. All in all a well written book filled with low brow humour, lots of inventive swearing, plenty of the old ultra violence, and an exciting story to boot.