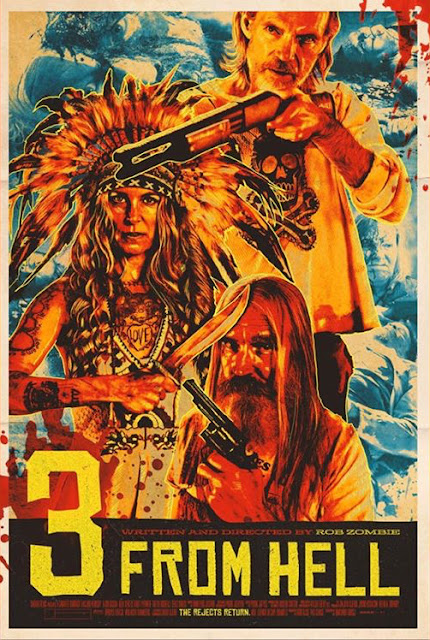 Rob Zombie is one of my favourite directors, I love the grimy, dirty style the look of his films go for, and I love the despicable characters he creates. 3 from Hell could be seen as the sequel no one asked for, 2005's The Devil's Rejects had one of the best horror film endings ever created, as the anti-heroes drive full speed towards a police blockade, Lynyrd Skynrd's Free Bird plays over the scene, until the film ends in freeze frame of the characters getting shot up. So to get a sequel to this in which the ambiguous ending is made clear is something that technically I should have a problem with. However, as stated I love Rob Zombie's films (with the exception of  The Haunted World of El Superbeasto), and so not only a chance to see another movie of his, but also to revisit such fun characters was something I was well on board for.

After being shot to pieces the deadly trio of Baby (Sheri Moon Zombie - Halloween, House of 1000 Corpses), Otis (Bill Moseley - Repo! The Genetic Opera, The Texas Chainsaw Massacre: Part 2), and Captain Spaulding (Sid Haig - High on the Hog, Night of the Living Dead 3D) are rushed to hospital. Miraculously all three survive, only to be imprisoned, with Spaulding later getting executed. Then in the late 80's Otis's half-brother Winslow Foxworth Coltrane (Richard Brake - 31, Halloween II) breaks Otis out, with their next plan to free Baby. To do so they decide to target the arrogant warden of her prison - Virgil Harper (Jeff Daniel Phillips - Westworld, The Lords of Salem) by kidnapping his family and friends. 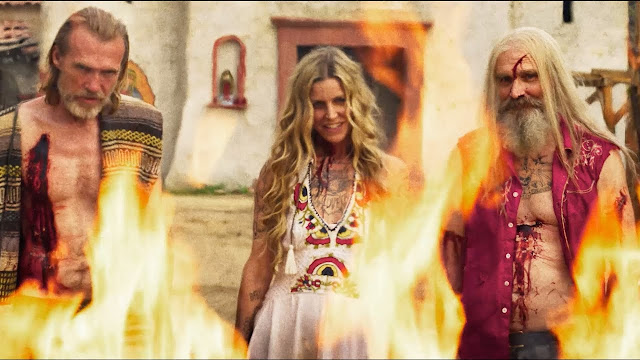 I thought this was a good movie, though I wouldn't say it was a great one. Following on from the amazing The Devil's Rejects was always going to be hard, and with a noticeably lower budget, as well as that one not really needing a sequel this doesn't manage to reach the highs of before. That isn't to say at all I didn't think this was a great Rob Zombie movie, I had a lot of fun with it, though the first half is a lot better than the second half where the events move to Mexico. When I first heard of 3 from Hell Sid Haig was meant to be one of the main leads. Sadly, due to his ill health in real life (tragically having died earlier this year) his role was cut down to just a single scene, but it was good to see him again, even if I also admit to being disappointed by how little he is in this. Thankfully they decided to replace him with Richard Brake, who had a stand out role in 31, in fact he pretty much made that film for me with his amazing performance. Sheri Moon Zombie has improved a lot over the years, here brings her to the best she's been. Her character of Baby is now more crazier than before, but also a lot less irritating. I loved how much of a wild card she was, like a Black Label Harley Quinn. Moseley is just great in everything he does, his Otis is as entertaining as ever. Meanwhile with Brake he had some funny scenes, but he wasn't all that memorable due to being around established characters.

3 from Hell is just jammed to the rafters with iconic actors, it was a delight just seeing the varied cast of cult actors, everyone from Danny Trejo (Machete, Breaking Bad) briefly reprising his role as Rondo, to Bill Oberst Jr. (Coyote, DIS), Sean Whalen (The People Under the Stairs), Dee Wallace (Critters, The Howling), and Emilio Rivera (Z Nation). Those are just the icing on the cake with so many actors here being immediately recognisable. Acting is great along the board, though occasionally there is some feeling of cheesiness in how characters act, especially in the second half which also includes a score that sounds like it was designed for a soap opera. The trilogy always features at least one iconic song during a key scene, and here 3 from Hell doesn't disappoint, with Baby, armed with a bow and arrow taking out luchador mask wearing Satanists to the tune of Iron Butterfly's In-A-Gadda-Da-Vida song. 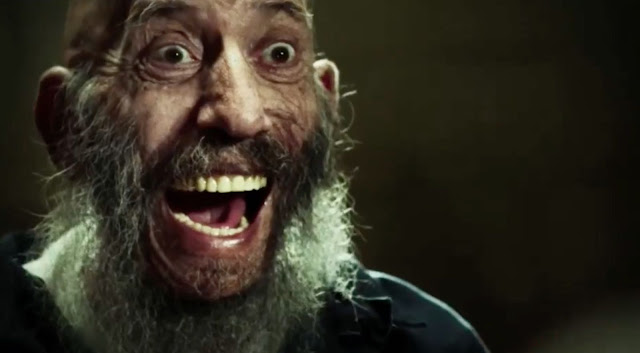 The first half of 3 from Hell was where a lot of the more traditional elements of the trilogy came to fruition. I especially liked the extended opening sequence which takes the form of a series of low-fi TV broadcasts detailing what has happened to the three over the past decade. From footage of them in hospital, to their trials, interviews with them in prison, and even 'found footage' taken during Otis's escape. This all gave a feeling of the fantastic Natural Born Killers in the format it was shown in. Amusingly due to the low quality look of this part I did check to make sure my Blu-Ray was playing correctly!This shares a similar path to The Devil's Rejects, it has its own version of the kidnap and torture from the motel scenes. Here it revolves around the kidnapping of the warden's family and friends. Some of the shock value has faded over the trilogy, and what should be horrifying instead just feels business as usual. There are some real highlights here, from Otis playing with the ashes he finds in an urn, to Baby armed with a knife chasing down a naked screaming woman in slow motion, to a hapless clown being forced to perform for the sadists, with a promise of release should he make them laugh. Clint Howard (The Lords of Salem, Apollo 13) was perfectly cast as Mr. Baggy Britches in what was both a uncomfortable, and funny montage. This time around there are far less prolonged scenes of distress, torture is usually brief, and the vast majority of the victims of the killers are people who pretty much deserve it. Baby's sadistic prison guard, double crossers, gang members, and more are all despicable people, with the slim minority being random innocents. I feel over the trilogy there was a real drive to make the villains the loveable anti-heroes, and with 3 from Hell this path is complete with them being the friend of societies outsiders. The three main leads may be nasty people, but even more so than Rejects they have become almost normalised, with their crimes played for laughs, and their fights justifiable.

3 from Hell may be a sequel that was never needed but it was a pure delight to see the actors reunited. The budget may be lower but this is stylish and inventive as ever with a nice mix of comedy and action. Occasionally it all gets a little bit too predictable, and does loose a little bit of the magic in the second half, but the style Rob Zombie seems to so effortlessly create shines through, and the wonderful set design and cinematography means I was left satisfied with what I had seen. Well worth watching, especially if you are fans of the previous films.