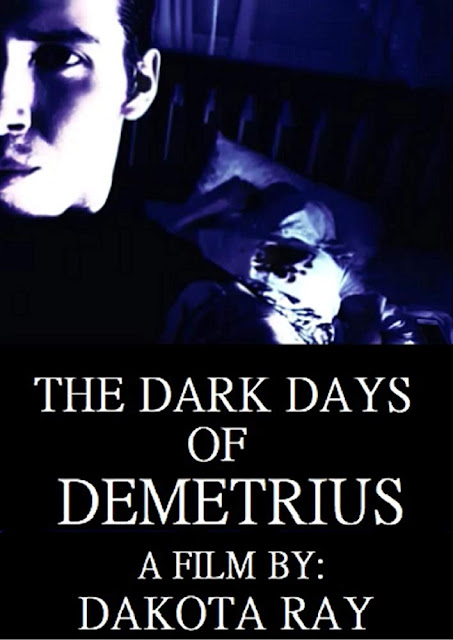 Indie exploitation director Dakota Ray (American Antichrist, The Acid Sorcerer) is back with his sixth feature length film, this one titled The Dark Days of Demetrius. With Ray you always know what you are going to get, and that is a delightfully twisted tale that takes place in the dark underbelly of American society. All the usual things you would expect in his films are here, from violence against animals, insects and the homeless, to prostitutes, drugs, senseless murder, and of course Ray in a leading role.

Ray stars as Demetrius, a serial killer who has been given the nickname 'The Live Stream Killer' by the media, due to him putting up videos of his kills on the internet. Being a narcissist and hoping for more attention he contacts corrupt news reporter Clive (Fred Epstein - American Scumbags) to give an interview, but the reporter wants to use this story for his own ends. Meanwhile a copycat killer calling himself Baphomet (Sebastian Oake who also co-produced the film) rises up in order to get his chance to shine. 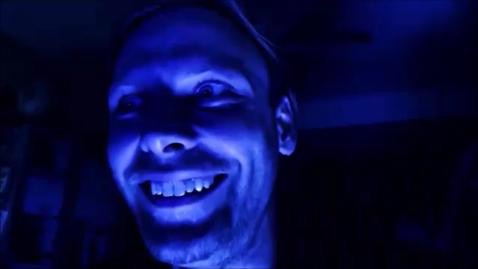 Normally with these films you get a series of interconnected stories that feature a whole host of miscreants doing their own thing. Dark Days felt like a much more traditional way to tell a story, with Demetrius getting the vast majority of the screen time during this hour long movie. With this character you get a lot of narration of his thoughts and beliefs, there is even a flashback to his childhood to shed some light on how he is the way he is, and some dream sequences whereby he likens himself to God. While the parts featuring Clive and Baphomet are separate they did feel more like subplots, than their own little movies. At first I wasn't sure about Epstein as Clive, his dialogue seemed a bit over the top, but then I soon realised this is very purposeful, he became my favourite character mainly due to the devilishly evil way he would grin at the laptop screen as he writes his sensationalist stories, with his eyes wide with excitement.

Ray is never one to use traditional filmmaking techniques, here the majority of Dark Days has a grainy blue filter, occasionally switching to red. This is something the director often does, here I read that the footage was purposely degraded in post production to give a more lo-fi look to go with the snuff movie aspect of what the main character is doing. As always the world of the film is a dark and joyless place, with no end of incidental violence (such as a dog in a cage being shot), and disdain for life in general, this one even features full frontal female nudity. The soundtrack as ever is full of heavy music that is never to my tastes, but it really does fit the nihilistic tone of the film. 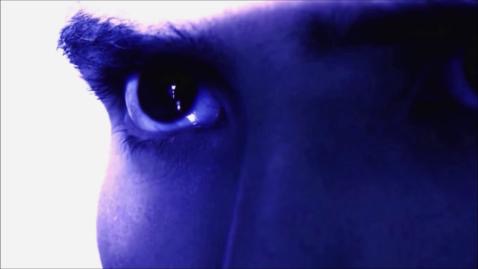 With a cast of just four (Lilith Frost rounding out the cast as Bunny) this felt like a more straight forward story. The themes of the media profiting off of misery and suffering, and how social media can be an outlet for the depraved to get an audience are easy enough to see. On occasion I felt some of the dialogue was a bit heavy handed, such as Clive constantly saying to himself about his need to get hits for his website. While the plot itself was more straightforward it is helped by the way it is split into chapters, with a nice flow to how the subplots overlap with each other.

The Dark Days of Demetrius is another solid exploitation movie in Ray's stable. With the social media aspect the random violence and abuse that in the past have felt there just for shock value actually feel relevant this time around. There is a real skill in the way these unpleasant films are made, with these there is something strangely comforting, knowing that what you are going to see is going to have that familiar bleak and twisted vibe. Looking back to the directors earlier films, such as My Master Satan: 3 Tales of Drug Fueled Violence it is obvious how much he has improved in the way these are created.