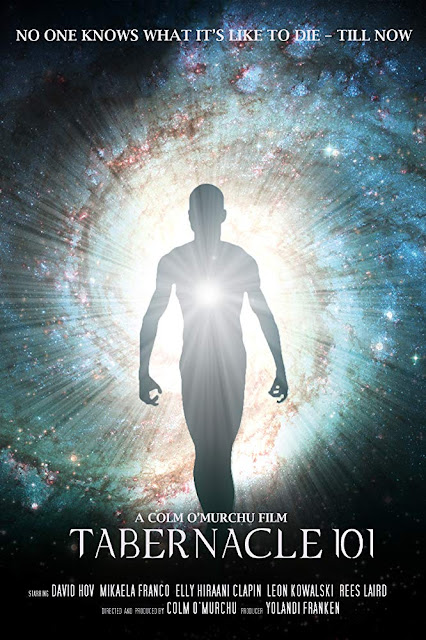 Tabernacle 101 is an Australian supernatural thriller that was produced, written and directed by Colm O'Murchu. While at times the frequently cheesy special effects and somewhat annoying main lead threaten to derail this, that same cheese also makes this into something that feels weirdly wholesome.

Frank (David Hov) is the atheist host of an online show that goes around debunking spirit mediums and various religious beliefs. He is a man of science and believes that any talk of the afterlife is ridiculous. After his partner on his show; scientist Sarah (Elly Hiraani Clapin - Bad Karma) manages to find a way to bring the recently deceased back to life, Frank jumps at the chance to have the experiment performed on himself. He believes if he is able to die and then come back he will be able to prove to the world that there is nothing when you die. The experiment goes ahead, and a triumphant Frank returns to life happy in the knowledge that what he thought was true was correct. However he starts to experience unexplainable events; strange figures that only he can see appearing, and objects moving around on their own, and slowly starts to realise that he has been wrong all these years. Teaming up with psychic Meredith (Mikaela Franco) he discovers the experiment he was a part of managed to open the door to the afterlife, and now demonic forces have invaded Earth set on causing chaos.

So watching Tabernacle 101 I was reminded of a whole host of other films covering a similar topic, quite a few of which I hoped never to be reminded of. The 2017 version of Flatliners has a very similar story of an experiment of going to the afterlife that leads to dark entities following the characters back. This felt like a low budget version of that. Other films that this also brought to mind was the truly awful Hereafter, as well as the pretty darn good We Go On. So in terms of originality this can't be said to stand out too much. What this does have that none of those movies did is an overwhelming feeling of wholesomeness. That is itself an accomplishment in a film that features demonic possession, some violent deaths, and even Satan! There was just a feeling of innocence to what occurs here, whether that be the charmingly average CGI, or the relationships between the characters, I can't quite place.

This is heavily reliant on CGI, and while it is indeed average, it borders on the side of average that is actually passable. The effects look sterile and a little too clean, yet they also fit into the real environment in a way that is much more natural looking than say the trash effects of The Church. Stuff such as an upside down crucifix with a fleshy effect to it, characters shooting beams of light energy out of their palms, and teleporting around locations all look silly, yet within the context of the film they are at least consistent in their quality. This is where a lot of the cheese factor comes in, with Frank turning into a bizarre mash-up of David Blaine and Jesus Christ. His death experience causes him to have a whole host of paranormal powers, such as the previously mentioned teleporting, he is also able to read peoples minds, heal the sick, levitate and many other miracles. At one point when he and Meredith are standing by a lake I felt for sure he was going to start walking on water! The scenes of him performing tricks for people in the stupid blue coat that Meredith magically made appear on him are so silly, helped with the funny performances of the supporting cast trying to appear shocked.

Frank himself is a bit of a bad protagonist due to the way self confident way he acts. His character is downright rude at many points, and several of the more horror based moments are caused by his arrogance. He reminded me quite a bit of the character Dennis from It's Always Sunny in Philadelphia. Meredith has made it clear he is only safe if he is around her, yet at two different points he ignores her advice and wanders off, only to get in trouble. These scenes felt like they were only there to try and inject horror into things. The horror never really works, there never seems any real threat. The demons themselves suffer a bit by the budget, wearing obvious contact lenses to make their eyes seem frightening, and they don't really do much to Frank. I did like the characters interactions with other cast members though. I loved the relationship he has with his nephew Daniel, it was really quite sweet. I also liked the chemistry between Frank and Meredith, it avoided the whole falling in love trope, yet they became quite close in what was shown as an innocent way. At times the story can seem a bit bananas, especially a late plot development that has something to do with a demonic computer virus causing the population of the world to fall into a coma? This whole plot twist comes from Meredith suddenly proclaiming it without any evidence at all which was odd.

There was something quite sweet about Tabernacle 101. At times it can feel even a little preachy with the atheist discovering religious beliefs are true plotline, and the evil forces here are lame to put it mildly, yet it has some heart to what was going on. Maybe with a more compelling lead character this had become something really special, but as it is, despite its flaws it was an enjoyable film. Tabernacle 101 released in selected cinemas on August 30th.