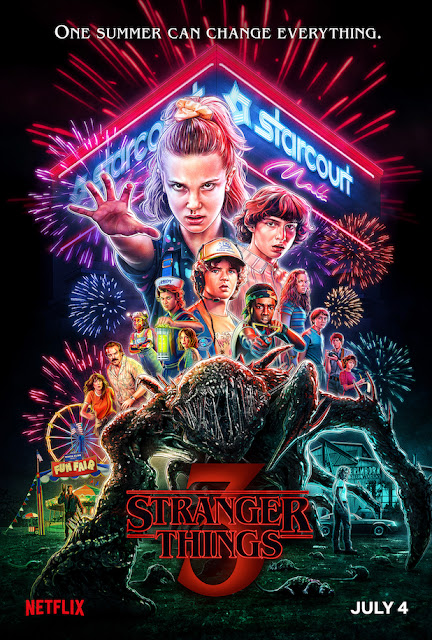 Last month I finally got around to watching season 2 of Stranger Things and from that I zoomed right into and through the third and currently final season (though a fourth has been confirmed). Stranger Things is a wonderful homage to everything eighties. The second season was great, but I never felt it reached the heights of that first season. I imagined the quality would again slip a tiny bit for the third season. Despite a vaguely downward start this season soon proved to be not only just as exciting as previous ones, but also keeping the amazing humour that led to me laughing out loud on many occasions. There are going to be unavoidable spoilers for previous seasons here.

The year is now 1985 and in the small town of Hawkins a huge shopping mall called 'Starcourt' has appeared, taking away business from the many smaller shops. This season is a lot about the core cast growing up, Mike (Finn Wolfhard - It)  and Eleven (Millie Bobby Brown - Godzilla: King of the Monsters) are a couple, as are Lucas and Max, with even Dustin (Gaten Matarazzo) claiming to have found a girlfriend while he was away at science camp. All of this has left Will feeling quite lost. The plot this time around is that a group of Russians have secretly infiltrated the town. They know about the gateway to the 'upside down' and they intend to use reopen it. This has the undesired side effect of allowing a part of the Mind Flayer (the big evil in season 2) that got trapped in the real world to become reactivated. 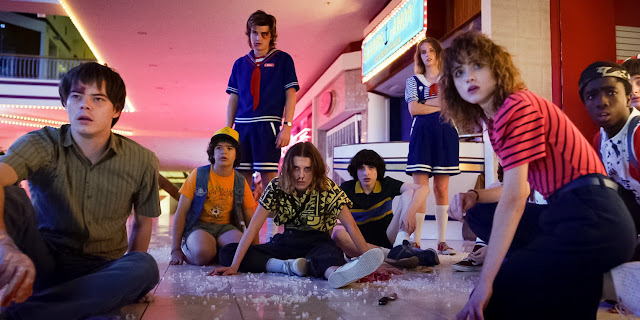 The format of Stranger Things is that there are many different stories going on that eventually meet up for an explosive finale. This season more than any other really separates everyone completely, with characters not even seeing each other for the vast majority of the show. Of these storylines it was the one featuring Steve and Dustin that was my favourite. Season 2 showed what a fantastic odd pairing they were, so to have them off doing their own thing for nearly the whole show was a great idea. Steve is my favourite character, I love how cool he thinks he is compared to how everyone else sees him,  and with him wearing a ridiculous sailor outfit for the whole season this is more evident than ever. The duo get paired up with newcomer Robin (Maya Hawke - Once Upon a Time in Hollywood) who is a great new addition, as well as Lucas's sister Erica (Priah Ferguson) who up to this point had just been a side character only appearing in a few episodes. These parts include some of the most funny scenes, such as hilarious call backs to things that have occured in previous seasons, and a very funny rendition of The Neverending Story theme song at a most inopportune time.
Another story going on that is barely horror based is that of Joyce (Winona Ryder) and Jim Hopper (David Harbour) discovering a huge conspiracy going down in the town. This also features a new character, the wonderful Alexi (Alec Utgoff), who like Bob in season 2 was someone I really grew to love. This storyline was the most action packed of the lot with a Terminator style antagonist who is constantly turning up to get in brutal fights with Hopper all over the town of Hawkins. On the subject of Hopper I didn't really like what they did with his character this season. He just comes across as moody and angry all season that made it hard to really get on his side. In general the tone of the show is a lot darker this time around.

While this is going on Nancy Wheeler and her boyfriend Jonathan Byers stumble across the supernatural element of this season, something which also comes to the attention of the rest of the gang. Before the Mind Flayer was something more supernatural and less physical. This new look for it has it very fleshy and real, coming across like a giant spider creature made out of meat. There are several huge battles with this monster, and the fights never failed to remind me of boss battles from the Resident Evil games, and with a creature design that would not look out of place in The Evil Within video game series. With a large body count of innocents this is the darkest season yet, the horror aspect can be quite nasty, and it was great to see the intimidating Billy get a much larger, and more pivotal role, that also sheds light on just why he is the way he is. He becomes a character that is a lot more sympathetic this time around. 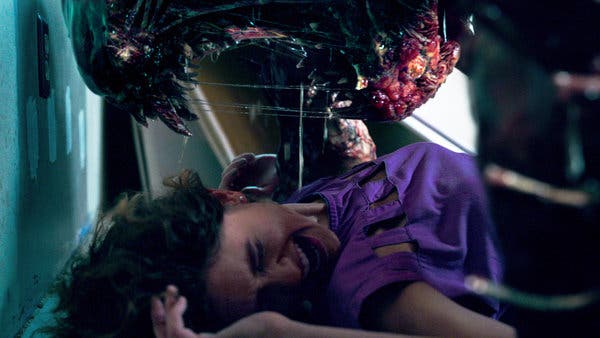 The love of the eighties is as always very much apparent here, from Steve and his friends hiding in a cinema during a screening of Back to the Future: Part 2, to discussions about My Little Pony, all set to the background of the Cold War. also helping this eighties feeling is a wonderful synth soundtrack as well as many classic songs from the time. As always the show is made with high quality, from the great looking sets, to the special effects it all shines. It could be argued the Mind Flayer creature doesn't look completely realistic, but then it is a walking chunk of meat and the effects for it are still darn good. The story seemed more fragmented than usual, but I loved how the storylines all finally meet up for the stunning 80 minute finale that is Chapter 8: The Battle of Starcourt. Needless to say it has left me wanting more.

Stranger Things just seems to improve in quality with each season. The core characters are as always great, but it is always a delight to see new characters being just as likeable. There are twists along the way, and not everyone makes it, but this remains as funny as ever, despite a darker tone, and a darker interpretation of many characters. If you love Stranger Things then you really are going to love this season. Another hit out of the park.