Scary Stories to Tell in the Dark (2019) - Horror Film Review 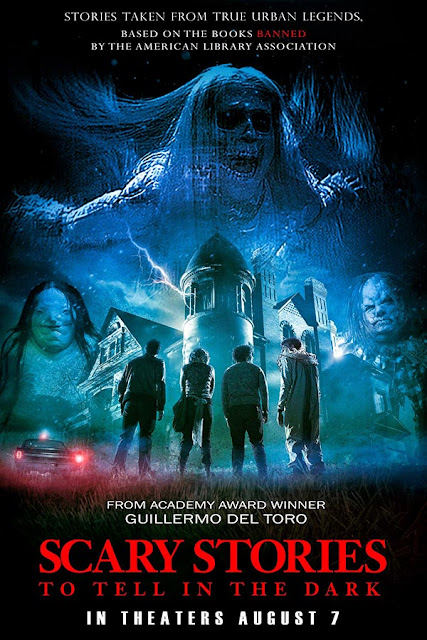 Scary Stories to Tell in the Dark has one terrible title, though it seems it is so called as it is based on a book series of the same name from the 1980's. Much like Goosebumps, rather than focus on one story this instead combines a variety of the books into one cohesive whole. There were three books published, combined having over 80 short horror tales, so there is plenty of scope for more films if this one turns out to be successful. It is directed by André Ovredal (The Autopsy of Jane Doe) so I knew in terms of directing at least this was going to be good.

It is 1968, and in the small American town of Mill Valley on Halloween four teenage friends, that include Stella (Zoe Margaret Colletti),  Auggie (Gabriel Rush - Better Call Saul, Gotham), Chuck (Austin Zajur), and drifter Ramón (Michael Garza - Wayward Pines) decide to break into an old mansion that has a reputation for being haunted. In the past a rich family lived there, and they happened to have a daughter named Sarah who due to some sort of disfigurement was kept locked away in a secret room. She apparently used to tell local children scary stories, but after these children started disappearing, and with rumours that she was behind their vanishing she killed herself. Anyway, the friends discover a secret room, and in that room discover a book of stories written by Sarah. Stella decides to take the book but is soon alarmed when she discovers horrific stories concerning people she knows are writing themselves on the blank pages. Realising that the chronicled events appearing are actually happening to the people written about, Stella and her friends set out to find a way to stop the horror, before they themselves end up as part of a scary story... 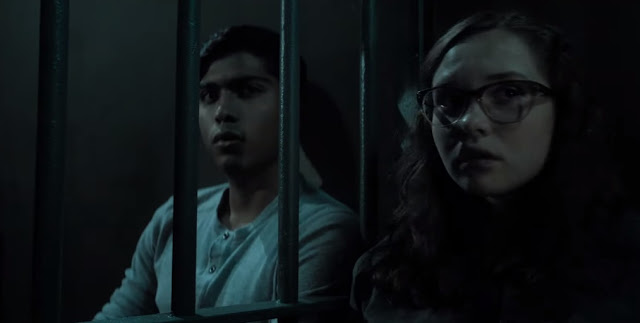 This movie flew by, so much so that I was a bit surprised when the end credits rolled around that nearly two hours had passed. This must be doing something right that I was so involved that I never once felt bored, or that time was really dragging. I would be lying if I said I didn't enjoy Scary Stories, however this is such a formulaic teen horror that it just can't be said to be original in any way. A creepy, supernatural female antagonist, a middle act that comprises of the heroes doing a lot of research, even a character falling over and twisting their ankle, all of this is so unoriginal. One Missed Call, The Ring, heck, even The Grudge, this tightly fits into the genre for better or for worse. One of the plus side though is the idea of each victim having their death be based on a different short horror tale led to a lot of variety. A zombie creature looking for her lost toe, a living scarecrow, spiders bursting out of someone's face, and a fantastic looking humanoid blob creature meant boredom could never set in. Jump scares didn't really seem to be in abundance which itself was refreshing, though the horror is usually more action like in its pace than sustained terror. I guess being a 15 rated movie would explain that, and why this is such a bloodless film.

While the main cast are not entirely unlikeable they can be irritating, unfortunately the main lead - Stella is the most annoying character in the film. It isn't really the fault of the actor, more that her character is 90% walking, talking exposition. Nearly everything she says it feels like is for the dumbest audience members benefit, most her lines are explaining what the characters are going to do, or where they are going to go. Not helped by the very earnest and passionate way she always talks. The script in general I felt really needed some work on it, it wasn't terrible, it just had a habit of feeling very filmlike in how generic the lines were. Talking of the actors, it was nice to see Dean Norris (Breaking Bad) in a small role as Stella's father. 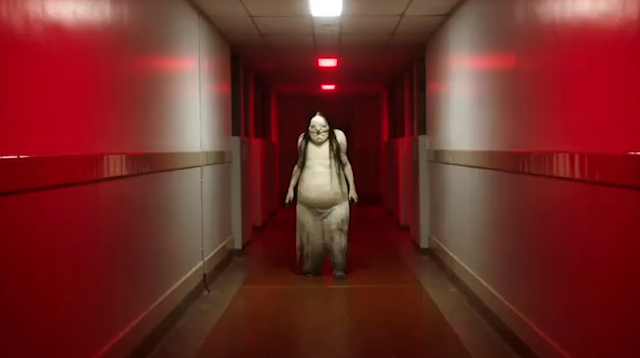 So the plot is nothing special, and is as predictable as you might expect. Scary Stories also never really sticks to the rules it creates. Early on it is suggested one victim is taken each night, yet by the finale things have sped up to have multiple characters being haunted all at the same time. There was no reason for this other than it made the movie feel more exciting. It is also suggested that each method of death relates to a particular fear a character has, but again this doesn't always completely match up correctly. Special effects actually were not too terrible, though I felt some, like the whole creature design for the 'Jangly Man' made it look a little more cartoon like than I felt it should have, which was a shame as it had such a long screen time for that particular creature. I did enjoy how particular events played out, the whole Chuck segment where his fear of a 'red room' he had had nightmares about turned into a real thing was a highlight as one strong example. For the small issues I did have with this I at least never had a moment when I found my eyes rolling.

Scary Stories to Tell in the Dark was a nice bit of throwaway entertainment, and while it is not going to offer up many surprises it does what it does competently. While I didn't think it was original I can't deny that I left the cinema having had an enjoyable time.