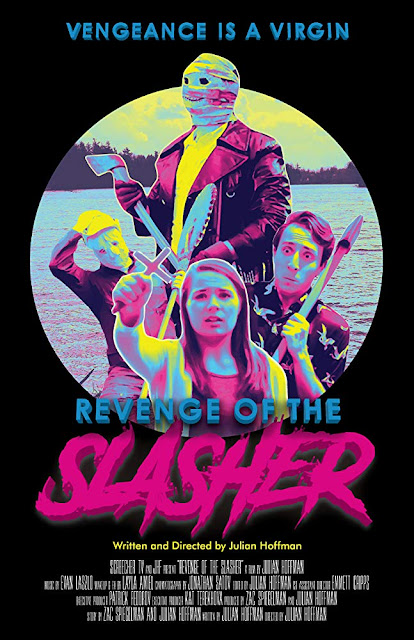 Revenge of the Slasher is a short award winning comedy horror that is Julian Hoffman's directorial debut, and which was also written by him, as him and Zac Spiegalman coming up with the story. While this is most certainly a comedy it is never so over the top as to get in the way of the entertaining story.

After Ernie 'The Autumn Hill Killer' (Spiegalman)'s latest rampage at Camp Autumn Hill is stopped by final girl Joey (Catherine Brown) he dejectedly returns home to face the anger of his disappointed wife. Two days later and Joey decides against the better judgement of her best friend to start enjoying the bad things in life, and begins a cycle of alcohol, drugs and partying. Meanwhile Ernie after the breakdown of his relationship decides to really be committed to being the best killer he can, and sets out to take revenge on the person who he sees as the cause for his misfortune. 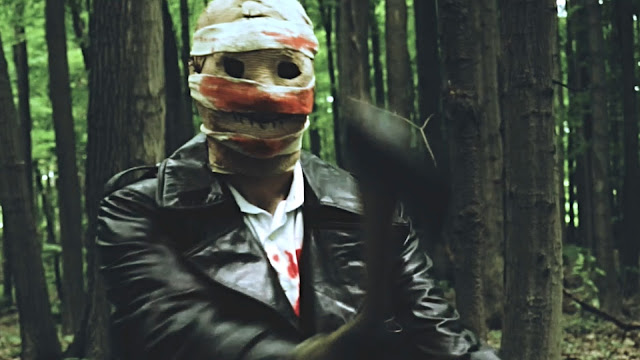 While Revenge of the Slasher is based on the slasher genre as a whole, it is most specifically the Friday 13th series that this takes inspiration from, due to the lakeside area Ernie kills in. While this isn't the first time a comedy horror picks up after the 'final battle' of a killing spree (the book Larry by Adam Millard springs to mind) it is handled in a way I enjoyed quite a lot. For a silent antagonist I felt a lot of sympathy for Ernie, which is helped by his bumbling nature, such as during a training montage of him practising axe moves, but constantly dropping the axe and tripping over. I also liked how the Joey side of the short plays out, with the two characters lives affecting each other without them actually meeting up. Perhaps my favourite scene is when Ernie is in the background killing someone by the docks at night, while Joey in the foreground drunkenly shouts abuse at him out of earshot.

Often comedy horror films have an over reliance on terrible jokes that just fall flat, and there are at least one or two moments here. The main way this short shines is by the way Ernie is made into the main character of this, the humanising scenes become funny because while going through all these human emotions Ernie is still an axe wielding masked madman, so the contrast works well. There is also a large body count which is helped along by some decent enough special effects, some good editing, while special mention must go to the lovely soundtrack.

Revenge of the Slasher is a charming 23 minutes of nostalgic fun that rarely falters, managing to be a entertaining homage to 80's slashers, as well as a pretty funny short in its own right. This is now streaming on Amazon Prime Video in the US, UK, Canada, Australia, New Zealand, South Africa, and several other countries.