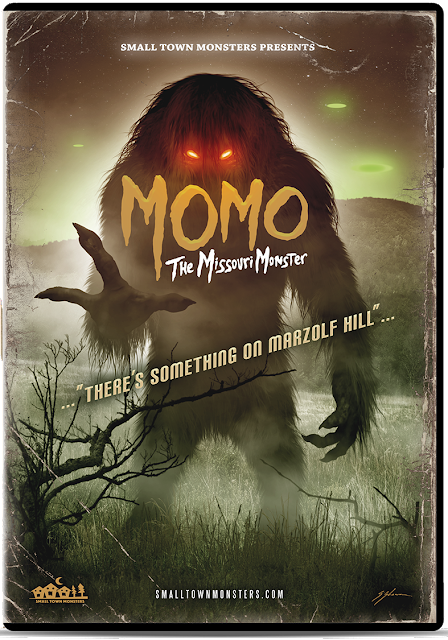 Momo: The Missouri Monster is the latest documentary to come from director Seth Breedlove (Terror in the Skies). As the title obviously suggests, this time around the focus is on a single creature, a bigfoot type monster that terrorised a small town near Louisiana, Missouri for a few weeks during the summer of 1972. This does something different for a documentary in that rather than straight recreations to show what witnesses say they saw it instead uses footage from a lost monster movie from the 70's, the titular Momo: The Missouri Monster. This would be well and good, but the thing is this movie never actually existed, segments purporting to be from it were actually created specifically for this documentary.

So according to historical accounts from the time, in the summer of 1972 a foul smelling bigfoot type creature was sighted by several different people. The biggest sighting being that of a family who claim that it was seen by their home holding a carcass of a dog. Along with this monster, during this period there were also many claims of having seen strange lights floating in the sky, which gave this an extraterrestrial angle to it. These events caused enough of a panic at the time that an organised posse of twenty men did actually go out hunting for 'Momo' one night. 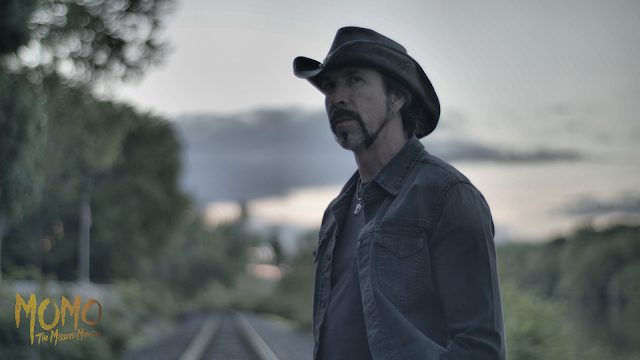 So, this documentary is split into two very different parts, that of the fake film, and the historical side itself. I always felt there was a bit of a divide with these two sections. The real part features interviews for witnesses from the time, as well as an exploration into the possible explanations for the creature, everything from an alien visitor, to a black bear and more. Like Breedlove's previous documentary I appreciate a balanced view that is given, in fact with most the interviewed people saying they don't believe there is any truth to the legend it often seems this is a lot of nothing. However I did find this interesting, and maybe bizarrely I found this part to be more effective, and even more chilling than the fake movie.

The movie part is designed to look like a lost film from the 70's. You have crackly footage, screen tears, purposely terrible acting, and even unused footage. It broadly occurs in cohesive order with the fake film in this program ending at what would have been the end of the film itself. This film is influenced by actual real films that had been based on sightings of bigfoot creatures, Creature from Black Lake from 1976, and The Legend of Boggy Creek from 1972 being the biggest inspirations. Usually this will show a clip from the film, before going to the real segment which then dissects what was shown and separates the truth from the fiction. While this was interesting in proving that some more outlandish stuff was said to have occurred it did seem odd to be poking holes at a fake film. More jarringly is when the investigator for the real sections directly comments on the Momo film as if it was a real thing. Knowing it is fake it then casts shade on the real part. If they are happy to pass off the film as real then why would you believe anything in this other segment, for all you know all these interviews could also be fake. I don't think that is actually the case, and this fake film was created for entertainment purposes, but the way it is weaved into the facts being spoken about gave this documentary a weird dichotomy. 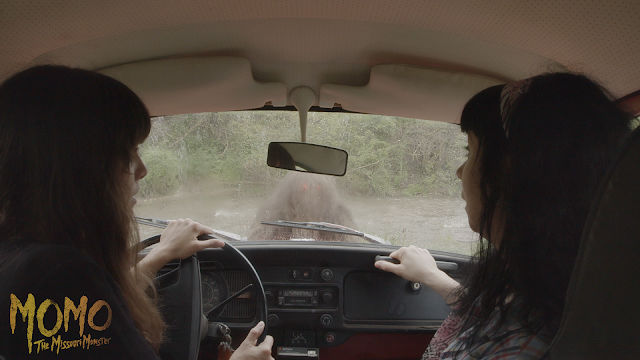 For an event that is light on many details this is padded out without seeming that way. Indeed, despite being longer than Terror in the Skies I actually found this one to be a lot more interesting, maybe the fake segments left more of an impression than it at first seemed?  Momo: The Missouri Monster had a midnight premiere in Kentucky on Friday 6th September, and is due to premiere in Ohio on the 13th of September. On 20th September this documentary will arrive on DVD and VOD thanks to Small Town Monsters.

Posted by Daniel Simmonds at 06:34