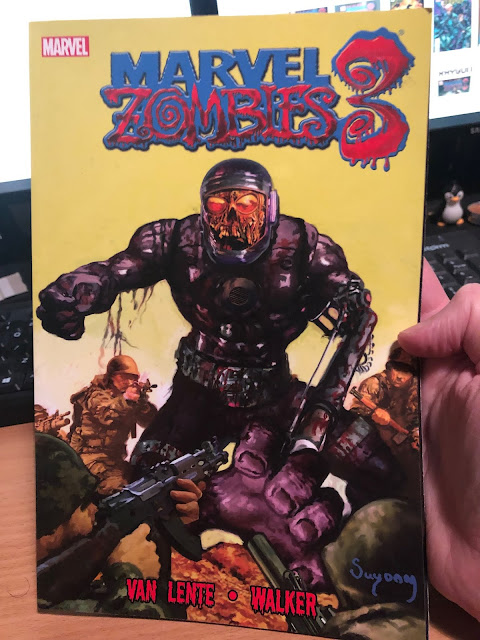 I was really not sure about the direction that the third series of Marvel Zombies comics would go. I knew that the story here didn't follow on from the cliffhanger ending of Marvel Zombies 2, that one picks up with Marvel Zombies Return that is on my reading list down the line. My concerns was that this third one was either a complete reboot, or was its own separate entity completely. Once I finally got over myself and gave this a read I was delighted that it ties in neatly to what has gone before.

Marvel Zombies 3 was a 4 part mini-series that interestingly takes place both in the Marvel Zombie Universe, but more importantly in the main Marvel Universe, where the events are automatically more important due to being the home of most the heroes and villains of Marvel comics. A team of Z-list super heroes who work for A.R.M.O.R (Alternate Reality Monitoring and Operational Response Agency) are called out to a reported incident of a reality breach in a Louisiana swamp. What they discover are the walking dead, and totally unprepared they nearly get wiped out. It seems zombie Deadpool from a different reality where everyone is infected with an undead virus, has managed to get to this version of Earth with the aim of spreading the disease to all life. After the survivors of this fight manage to stop the outbreak from spreading any further, Morbius, who works at A.R.M.O.R HQ decides a vaccine must be created just in case any more undead manage to find a way to this reality. The only problem is that to do this some volunteers must travel to the zombie reality to get a blood sample from an uninfected human there. Being robots Machine Man and Jocasta are the ones sent, but not everything is as it first appears... 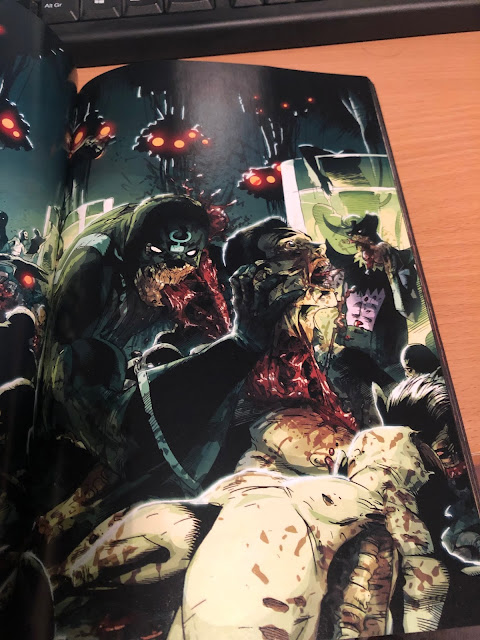 After a very confusing start this soon became a very good graphic novel. To be fair it was confusing because I was impatient to discover if this was in any way related to the other books and so had little patience. The actual story here in the overall timeline is between the first and second books, this occurs around a year after the first book and reveals that there were far more Marvel super heroes and villains still around on Earth than there appeared to be. Here a whole cast of characters live under the rule of zombie Kingpin. I really didn't know who a lot of the characters featured here actually where, if names like The Conquistador, Siege and Machine Man mean anything to you then you are a bigger fan than me. In my anti-defence if a character hasn't turned up in a film then to me they are Z-list. Ones I did recognise that I haven't yet mentioned off the top of my head are Vulture, Ghost Rider, Dr. Strange and Man-Thing.

What I enjoyed a lot about this one is that the focus is on the heroes rather than the zombies. Being partly set in the main Marvel Universe meant that I never felt much concern for anyone important as there was no way the writer (Fred Van Lente) would be allowed to affect that place much. The story of Machine Man travelling to a different universe was one I found really interesting. He was a strange character but I came to quite like his travels. It is helped by an art style that I thought was attractive, both the art (Kev Walker) and the colouring (Jean-Francois Beaulieu) were fantastic. There are plenty of scenes of zombies eating, and quite a few impressive double page spreads. This is full of action and gets really quite gory at times, such as when too unfortunates run straight through piano wire and get sliced apart! It also weirdly features the first non-super humans in the series.

I went into Marvel Zombies 3 with low expectations. I knew barely any of the heroes and villains featured here, yet it was a joy to see so many other characters that I just had no idea even existed. The plot when you think about it may be pretty basic, but it is executed well and was a blast to read though. Needless to say this is well worth a read, I can't wait to read book number 4 which acts as a sequel to this one.