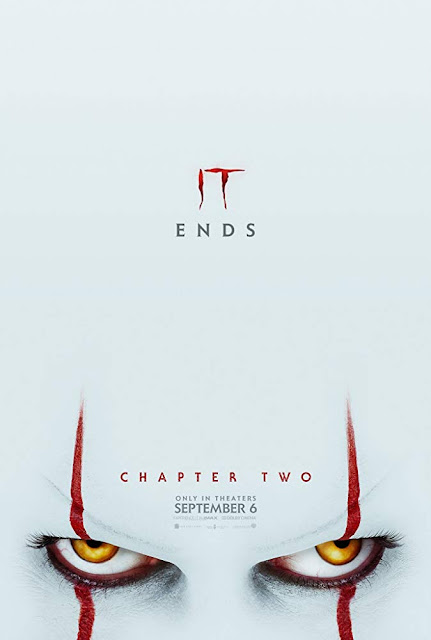 I was surprised to realise that it had been two years since Andy Muschietti's (Mama) adaptation of Stephen King's It had been released. Though it didn't seem as if it had been that long I did realise that my memory of that first film was a little woolly. I didn't have time to get around to re-watching that one so had to settle for a quick read through of its Wikipedia plot summary before It: Chapter 2 began. I really enjoyed that first film but was aware that I had been caught up on the hype train a bit. For this second one I'm out the loop enough that I'm not even aware if there was a hype train this time around.

Having seen the 1990 mini series of It I had a fairly good idea of where this second chapter would go, and it certainly all started familiarly enough. This picks up 27 years after the events of the first film in which a group of small town misfits banded together to defeat the monstrous being known as It (Bill Skarsgard) . They had made a pledge that should the creature ever return then they will reunite to stop it once again. During the decades the friends have drifted apart, with only Mike (Isaiah Mustafa - Shadowhunters: The Mortal Instruments) staying in Derry, obsessed with finding signs of It's re-emergence. Once he does he contacts the old group; Beverley (Jessica Chastain - Mama), Bill (James McAvoy - Split, Atomic Blonde), Richie (Bill Hader), Ben (Jay Ryan), Eddie (James Ransone - Sinister, Sinister 2), and Stanley (Andy Bean) hoping the group can meet up to stop the creature once and for all. 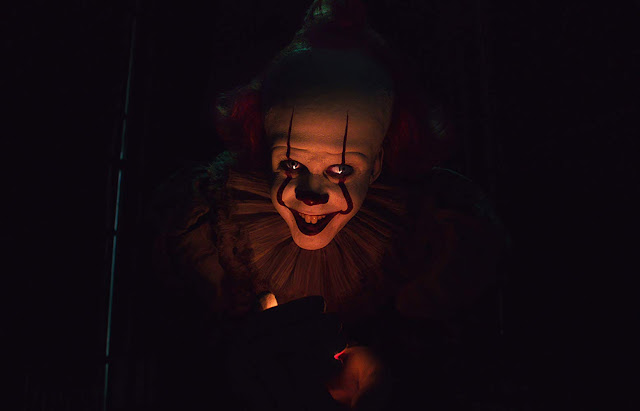 The intention of how violent the world of this film can be is displayed straight away in the brutal prologue in which two gay men are attacked quite viciously. That reminded me that the first film also never made an attempt to keep the physicality of attacks reigned in. Scenes like this are few and far between with the majority of the horror here being the various situations the characters find themselves in. The first half of the movie has each of the friends going off on their own little quests. This boils down to a series of side stories with each character getting in a different scary situation. Beverley, returning to her childhood friend gets attacked by a huge monstrous granny for instance, while Ben revisiting the school he used to attend comes under assault by a flaming demonic version of Beverley. I enjoyed these little sections, but this first half suffered a little by having the cast conveniently separated. It was the second half in which the friends are reunited that I found much more enjoyable. Due to the special effects fest that this is I was never scared at what was happening, this was endlessly inventive though with it being a joy to watch.

The special effects here are very good, though there was a choice that everything looks slightly cartoon like, likely purposeful due to It's playful side, but it does make it harder to feel any fear when the encounters usually feature at least one unrealistic creation. Still this is made better by variety, and there is so much of that, from a severed head sprouting spider legs and attacking the group, to a fortune cookie splitting open to reveal some sort of baby headed monstrosity. These scenes were always memorable. The finale that features It in its true form was so much better than what I recall of the 90's mini series, making for a thrilling time. These effects are complimented a lot by the great sets, there is a great scene in a fun house for instance, while the meal at the Chinese restaurant was also helped by the great designs. Skarsgard was fantastic in the original, and here he is just as good, though I felt that he didn't seem to feature as much this time around (I believe I read he's only in the movie for ten minutes in total during the near three hour film, don't quote me on that). A complaint with the original film is that the clown seems content to just scare his victims rather than kill them which took some of the tension away, here a similar thing occurs. He is shown killing random victims, yet whenever it is his time to battle one of the core characters for whatever reason he always seems unwilling to try killing them too hard. 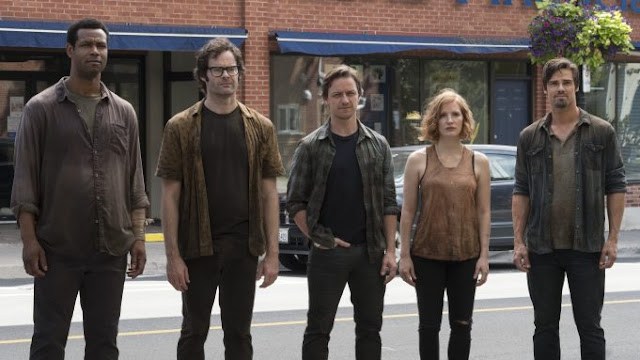 One bit of the story that I really loved here is how the past and present intermingle with each other. Multiple times as characters explore Derry the scene suddenly shifts to the same location but 27 years previously, which made it feel like these past scenes were missing ones from the original, but held back for this one. I really enjoyed the blending together to really create a contrast between the child and adult versions of the characters. There is a lot of humour here, especially with Richie who is full of one liners, and dry observations, but it may be due to being spoilt with Stranger Things recently but I felt some of this felt a tiny bit forced. I thought the initial meetup of the old friends towards the start here was wonderfully done, but this feeling of camaraderie sometimes paled in comparison to other shows and films like this.

Despite the first half of It: Chapter 2 being a bit slow in how it plays out, this is a film that just gets better and better as it goes along. I enjoyed the little hints as to the origins of the creature, while the visuals here were often quite trippy (such as mouths forming upon a neck, or little hands growing out of bigger hands), it made seeing what was next quite addictive. Even missing the hype train this time around I thought this was a damn good movie, even if it never becomes anything that I ever found to be scary.