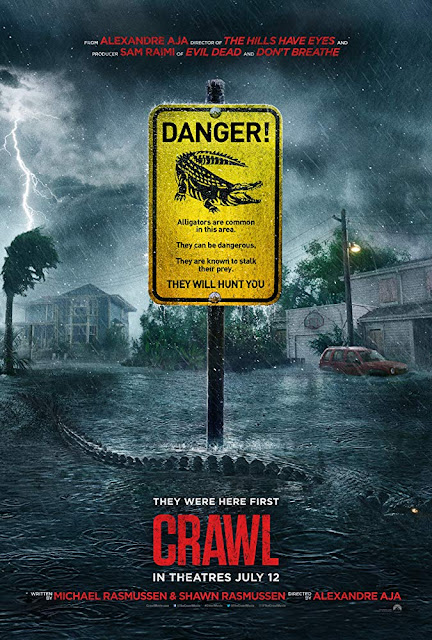 The majority of this review I am transcribing from a voice note I made while sitting in my car after having watched Crawl (directed by Alexandre Aja - Piranha 3D, The Hills Have Eyes), due to being busy later on in the evening I saw it. I watched the film at the same time as my sister, but didn't watch it with her, coincidentally discovering later that we had unknowingly been in the same screening as each other! That was useful as I got her and her boyfriends perspectives on the film too. I wasn't expecting much from Crawl, this was about my fifth attempt to go see it. I've never been too keen on horror films about animals, films like Lake Placid and Jaws kind of bore me, but surprisingly to me this film was actually very enjoyable.

Wannabe professional swimmer Haley (Kaya Scodelario - Maze Runner, Moon) gets a call from her sister warning about an incoming category 5 hurricane, and that she is worried about her father, Dave (Barry Pepper - Maze Runner: The Death Cure, Saving Private Ryan) due to not being able to get in contact with him. Hayley isn't really on speaking terms with her dad but decides to drive to his house to check in on him for her sisters sake. Eventually she tracks him down to their childhood home where she discovers him lying unconscious in the basement (which is nothing much more than a glorified crawl space). As she tries to drag him to safety she suddenly discovers just how he came to be injured, there is a huge alligator in the basement with them, and it is blocking the exit. Her father comes to and so the rest of the movie is them working together to try and escape before the rising flood water, or the alligator kills them. 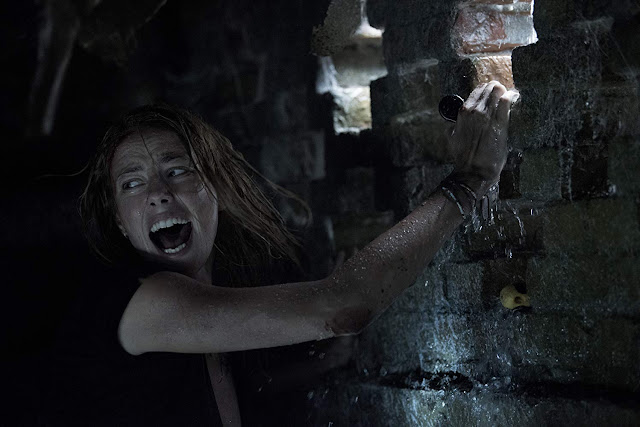 I had only seen the trailer a few times prior to seeing this, but I feel the trailer did a grand job of not spoiling a very early twist which raised the stakes a lot. Due to this I'm not going to spoil that little twist, but this will mean that I have to spin the truth a tiny bit. Needless to say, but the film is a lot more exciting than I gave it credit for, and there was actually a body count. While the father and daughter are the main characters there are a bunch of additional ones who seem to only appear in order to get eaten. I wondered at first why the film was titled 'Crawl' when it was set in a basement, but it turns out this is quite fitting, with the alligator of course crawling around everywhere, and due to the low ceilings the characters too do a lot of crawling. The way the film plays out, the basement itself is really only the start of the problems the characters face, with the rising water comes the rising alligator too, who is much more at home swimming about than being on dry land. Everywhere the characters go the blasted creature appears, the animals really are like real world monsters in the way they look. The constant threat of this creature had me coiled like a spring in my chair, I could feel myself so tense wondering where the next attack would come from.

It's not all perfect though. There are so many times when Hayley is safely out of harm's way then is provided with an excuse to put herself back in danger, whether it being to retrieve her mobile phone she dropped, or to grab a radio she spots, or a myriad of other distractions. Then as my sister pointed out, the characters both receive multiple injuries which look very damaging at the time, yet appear to have no impairment whatsoever on stopping them doing anything, this even includes losing a limb! To my sister things like this pulled her out of the film, for me though it just meant the action could continue uninterrupted. This is pure escapism, and despite the silliness around the edges I was fully involved in the story, not once finding my mind drifting off to other things. 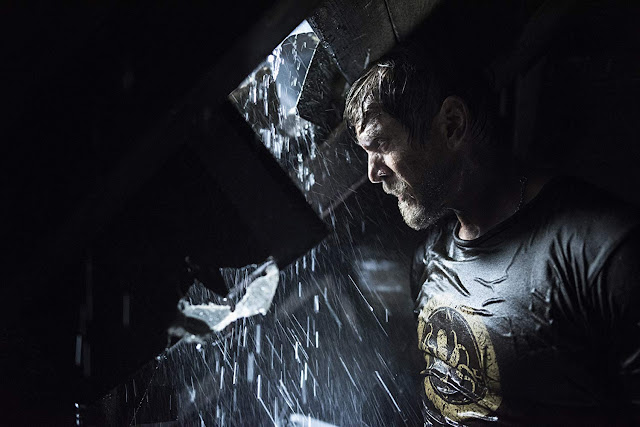 It also helps that Crawl is very well made, I loved all the water effects, and I loved that it is raining for the majority of the film. I also really enjoyed the set design, and the cinematography was usually spot on, and the editing of scenes from the characters past into key moments here was implemented well. The special effects looked mostly good, the alligator looked intimidating, and there were plenty of scenes of characters fighting the creature in a variety of interesting ways, the best perhaps being when a character has had their arm chomped on, who then unload the pistol they are holding into the belly of the beast. I say the effects look mostly good as there is one scene where spiders crawl over Hayley's face, and I have to say they looked very CGI, a bit flat and video game like. The acting I thought was solid throughout as well, I don't mean it to sound insulting when I reckon the best performance came from a cool dog who had a pivotal role for the duration.

I went into Crawl towards the end of its cinema run, I saw it as a chore, something I had to see so that I could review it on my blog. It surprised me, I came out thinking that it was a really well made, exciting and an enjoyable piece of escapism. It's not realistic, but then it isn't meant to be realistic, it's a film, and it completely worked in transporting me to a different place for an hour and a half.