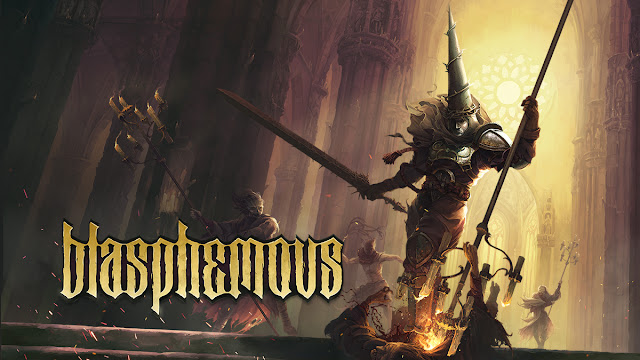 From the very first moment I set eyes on metroidvania action game Blasphemous I just knew that regardless of quality it was something I just had to play. I loved the pixel graphics, and I thought the gothic look was amazing. So as soon as it came out I snapped it up on the Nintendo Switch, and thankfully it turned out to be a damn stunner.

The story here is never explicitly explained, what story there is I pieced together from cutscenes, as well as the lore that can be read for most the items you get in the game. I'm sure my summary is incorrect, but I am purposefully putting my own thoughts as to what is going on, rather than researching it. Blasphemous takes place in a world where religious apocalypse has come to pass. Fervent religious belief has manifested in the form of the coming of 'miracles' which have corrupted the peoples of the land in a variety of ways. It seems the most pure of heart have been transformed into living statues, while the most corrupt have been judged as guilty and changed into murderous versions of their former selves. You play as 'The Penitent One', a mask wearing man who sets out on a quest to bring about an end to the time of miracles. 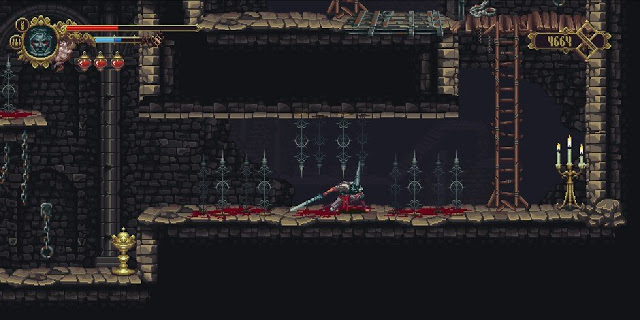 The metroidvania style of 2D platformer is one of my favourite styles of games, yet I have found that the tone is really important for my enjoyment. Take Hollow Knight for instance, that is a wonderful game, and yet I haven't played it in months, the insect theme not really appealing too much. Then there is Bloodstained: Ritual of the Night which was touted as a replacement for the much missed Castlevania games. While that is a delightful game, and does feel like a homage to that series that is another that I have not played in some time despite being deep into it. With Blasphemous I adored the game world, the dark gothic look with overt religious themes to the landscapes and enemies you face, it felt like a video game that would have been created had there been such things in Medieval times. The game world is a dark and moody place, this came across at times like a 2D Bloodborne. This is fitting as there are many elements that have had people calling this very Dark Souls in style.

As well as the tone of the world, and the lore deciphered through items this also operates in other similar ways to Dark Souls at times. You save your game at shrines, doing so repopulates the world with the enemies you have killed. You have flasks with which you use to heal your health, again becoming refilled at these shrines. Blasphemous as is custom for these games is one huge level, split up into different areas. I was impressed with just how big this game become, with some variety in the locales you travel to. There are no end of short cuts, such as lifts, secret doors, and switches that combine to create loops so that any area in the game can be gotten to relatively quickly, with a sparse number of teleport rooms also helping travel. As you progress you get access to a variety of relics that help you get to areas and items that seemed impossible to get. These include a relic that makes you immune to clouds of poison, that let you hear the thoughts of the dead, that create floating platforms made out of blood, allow you to jump down chasms unscathed, and summon giant roots you can climb up, and a few others. Annoyingly you can only have three relics equipped at any one time, I didn't really see the point of limiting this as it can be fiddly to constantly have to be equipping and unequipping these. 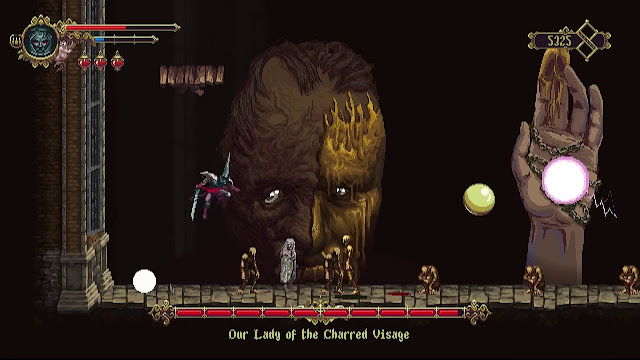 Charms can be collected also which give a variety of effects from increasing your defence, to making your dash attack easier to perform, while there are a variety of magic spells to unlock. The collection part manifests with the 38 cherubs hidden around the game world, as well as a whole bunch of sacred bone parts to find, again each with their own little story. The world is set out in such a way as to make it so I never once didn't know where I should be going, I always naturally worked out what needed to be done next. The locations are interesting and sometimes felt very Castlevania like. There are various churches and cathedrals to explore, as well as a snowy mountain, sewers, a library, rooftops, and my favourite location in terms of design; a huge upside down bell buried into the ground. There are around ten bosses in the game, all with fantastic designs to them. From a huge skeleton priest laying on a recliner that is being held up by giant arms from below the ground, to holy knights, and a wicker snake that comes from a wicker cradle in the background attached to a giant screaming baby. These boss fights all look great, though there were only really about three or four bosses that took me a while to work out how to defeat. Usually the bigger the boss is, the easier it is to defeat it. The normal enemy design is also great, from men wearing golden minotaur masks, giants encased in brass bells that charge at the walls, floating priests wearing long robes that stab below with spears, and self-flagellating grunts. These more traditional human enemies are backed up with cowl wearing spirits, celestial floating winged heads, and the best looking enemy which takes the form of a man split in two, the huge buzz saw that is embedded in the middle of him then thrown like a boomerang. A minor complaint with the enemies (as well as the friendly characters you do side quests for) is that there is no bestiary given any sort of information for why they are like they are.

Since I got Blasphemous a week and a half ago I was totally hooked, playing it every chance I got, even taking my Switch to work to play on my lunch break. With the mournful guitar led soundtrack, the attractive pixel graphics, and the satisfying gameplay and design there was little here that I didn't love. This may well be the best game I have played all year.