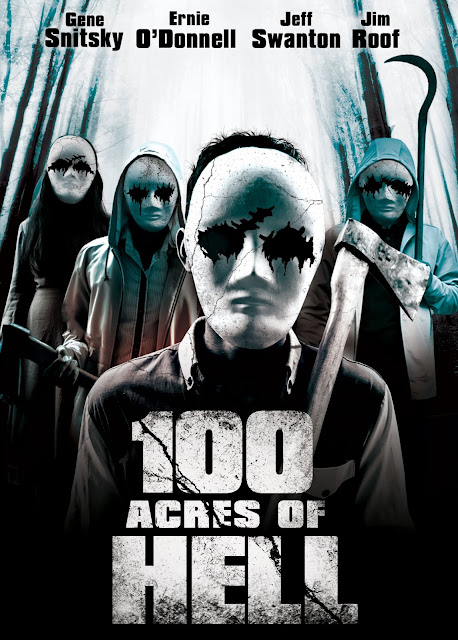 100 Acres of Hell is an unapologetic throwback to inbred redneck in the woods styled horror such as Wrong Turn. It was directed by Hank Leigh Hump, with Lisa Lakeman and Ernest O'Donnell as second unit directors, O'Donnell also playing one of the main characters here. It was written by Jason L. Koerner, Ed McKeever, and Gene Snitsky, with former WWE star Snitsky starring in the leading role, and Koerner acting in a bit part.

Buck Severs (Snitsky) is a former pro wrestler whose career ended after a tragic accident. Him and his friends used to have 'Bro's Weekends' together, and due to having not seen Buck for several years they decide to arrange a new one to reunite the friends. They decide to head to the remote Foggy Creek which is home to an abandoned wildlife preserve, and are undeterred by the locals warning them against heading there. There was a local legend of a deranged redneck named Jeb Tucker (Sam Anoai -  a former wrestling star himself) who once went on a rampage at Foggy Creek, but was assumed to be just a story. It soon turns out he is alive and well, and none too happy about intruders invading his home... 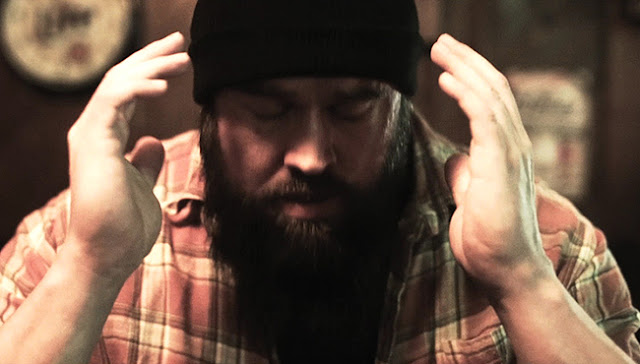 If you come to this film expecting something fresh and new then you may be disappointed as nearly everything about this horror is as generic as you could get. From the locals warning the 'city folk' away, to lots of random kills, a mostly predictable story, and an utterly forgettable film score there is nothing here that surprises, save for the ridiculous twist towards the films end, that was very dumb and made little sense, but have to say it was a fun finish. 100 Acres of Hell seems intent on providing some mindless entertainment and in that respect it mostly succeeds.

A lot of the film takes place at night, which led to quite a few scenes that seemed almost too dark. It was the editing which was my biggest complaint though. This is obsessed with close-up camera work, and fast editing of these close-ups that meant that the bigger the action scene going on, the more the editing would seem to speed up. This culminates in the scene with the most moving pieces developing into something that I struggled to follow. It seemed to be a series of characters getting killed, intercut with the killer seeming to just be standing in place. The more evenly matched fights work out a lot better then these bloody but chaotic moments. There is a large body count, and mixed in with all the chaff there are a couple of interesting ones, such as a huge log being dropped on a man in a sleeping bag (slightly ruined with what appeared to be a CGI blood spurt), and an arrow that goes through a man to pierce into his girlfriends mouth. With the obsession of close camera work through a lot of the deaths loose their visual appeal. 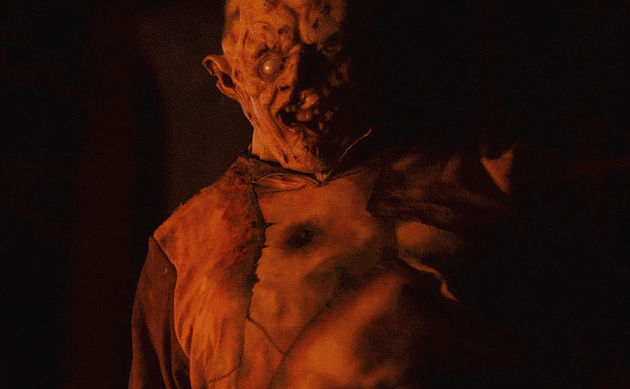 Usually when wrestlers appear in films there are going to be some scenes that feature actual wrestling, and 100 Acres of Hell is no different. The entire final fight scene felt like one long wrestling match, with plenty of throws, and an alternative for a corner pole to climb. It was all fun enough, though never really felt the look of Jeb was that strong due to prosthetic makeup that merely looked adequate. There was no stand out acting here, but Snitsky being built like a brick wall made for an impressive looking protagonist. The plot is as simple and as uninspired as you would expect but I really didn't expect anything more. The usual group splitting up to find their missing friends, but it was slightly different in that the core cast are men in their 40's, not young stupid teens. Saying that there are the usual stereotypes, such as the perpetually horny guy, and the overly confident one.

100 Acres of Hell was a decent enough horror throwback, channeling at times the spirit of Friday 13th with its Jason type killer. It doesn't set out to reinvent the wheel, but at times that is to its detriment as while entertaining it isn't really something that is going to be stuck in the mind for too long. Still, if this is what you are after then you will get something out of this. 100 Acres of Hell gets a limited theatrical release on October 8th, and comes to DVD and Digital on October 15th thanks to Indican Pictures.

Posted by Daniel Simmonds at 15:21