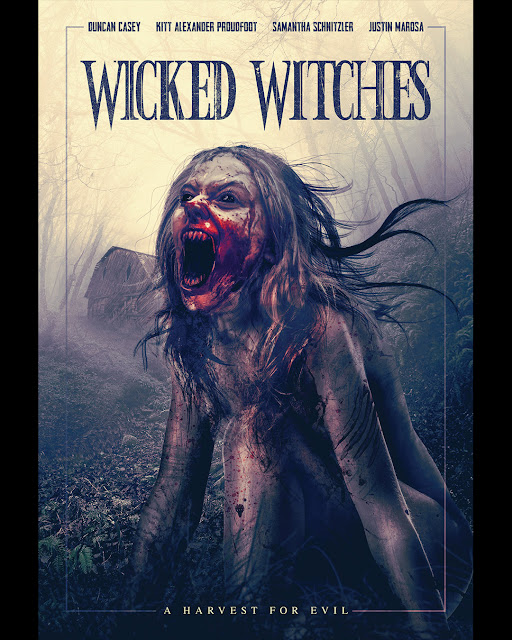 Wicked Witches (also known as The Witches of Dumpling Farm) is a U.K horror directed by Martin J. Pickering, and co-written by him and Mark Pickering. While this by no means a perfect film, as a piece of brain dead entertainment I think it actually succeeds. Not a lot is explained, and characters have wafer thin personalities, but it takes joy in its bloody scenes of horror and carnage. Coincidently it is the third film this year I have seen that features party goers at a remote farm getting attacked by demonic forces (the others being Soul to Keep and Shed).

After being kicked out his house for cheating on his wife, Mark (Duncan Casey - Skyfall) sees an ad in the paper for a cottage to rent at Dumpling Farm. The farm is the property of an old friend, Ian (Justin Marosa) and so Mark thinks it will be the perfect location to stay at. His friend however is behaving very strangely and so Mark hopes a party he has planned will make himself feel better about all the weird things he is experiencing. 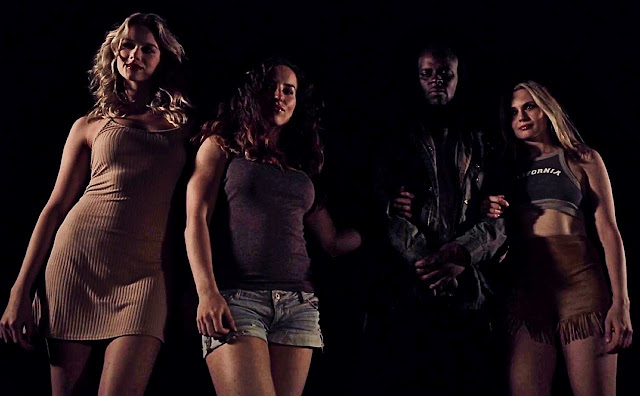 So, the basic plot is that Mark has a party planned, one in which things go wrong. That's about it, there are no subplots, conversations characters have are very superficial, and apart from a few moments when Mark's cheating is referenced this topic is never explored. It doesn't help that he is a pretty silent protagonist. It makes sense when he is on his own that he wouldn't speak, but then when he is around people it usually isn't long until he is on drugs and withdrawing into himself. Side characters don't really fare any better, the main one is Kitt Proudfoot as Stevie, a perpetually drugged up party animal who is as one dimensional as they come, but does provide the most dialogue here. I have to admit his perpetual inane grin (that comes into full force during a protracted party montage), coupled with his friendly personality made him steal scenes by default. With Mark there was no effort made to make him into a relatable character, he seems to have no remorse for his infidelity, and seems kind of dull (loved the Alan Partridge style scene in which he is shouting "Hello! Ian!?" over and over again as he walks across a large field towards his friend. When action starts he does transforms into a budget range Ash from The Evil Dead, so he is not all bad.

Up until the halfway mark there isn't really too much horror outside of a few dream sequences Mark has in which beautiful women suddenly transform into demonic looking creatures. When the horror comes for real though it really comes. One bloody scene of over the top comedic violence was enough to get me on board here. This is where elements of fun really come out, after all it is hard to take the image of someone getting their arm ripped off, and then beaten around the head with it all that seriously! It was with this scene that my expectations became balanced and I knew I was in for a ridiculous, yet entertaining ride. The special effects for dismemberment and intestine spilling are adequate, I wouldn't say they were amazing, but plenty of gore does help this along. The make-up effects for the so-called witches is a lot better, they have great looking spiky teeth and black contact lense that is an image that works for them. 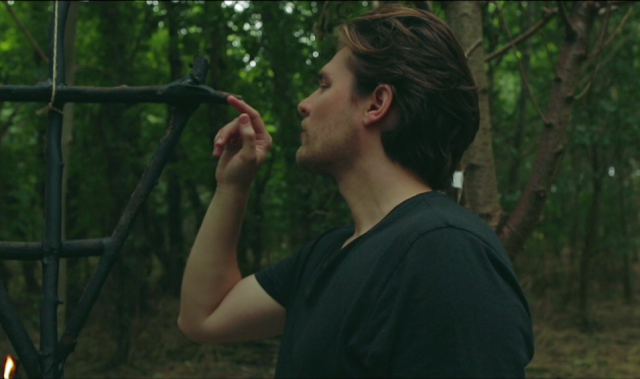 Like the human side of the story there isn't a hell of a lot of explanation for what is going on. The film is called Wicked Witches, but these look much more like demons than that. A lot of demonic imagery dotted throughout the movie also backs up this assumption. With such a shallow attempt at characterisation it is not really a problem that nothing is explained. With things like this it is best just to switch your brain off at entry. It is all held together by fine enough directing and camera work. There are plenty of drone shots used, and in particular during the party montage lots of tight up close camera angles to hide the lack of people actually at the party I assume.

Wicked Witches isn't a great horror film, but it is a fun one. Look too closely and you will see the constraints this had, it can be almost trashy at times. However the fact the story is never told too seriously saves this, I found it kind of endearing and was able to enjoy all the mayhem and madness that came from a bunch of razor toothed witches hunting and eating their prey. Wicked Witches comes to theatres on August 9th thanks to Midnight Releasing.