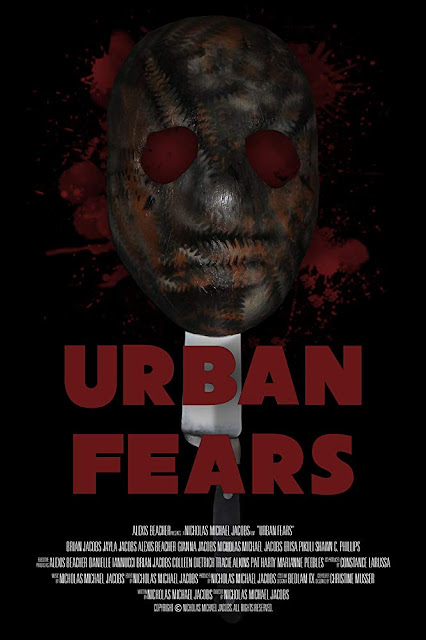 It was only back in April that I watched Nicholas Michael Jacobs found footage torture film Night, and now he is back with a new film, an anthology of interconnected stories called Urban Fears. As before Jacobs is involved in so much of the creation of this. As well as director, writer, producer, editor, composer he also helped with the cinematography and acts in this one. Also like his previous film it appears that he had a lot of help from family members with the credited cast including five different actors with the surname Jacobs (of course it could be coincidental). I made it clear during my review of Night that I didn't like that particular sub-genre of horror, with this one though, I do have a soft spot for anthologies.

It seems the remit for Urban Fears was to display that while most horror films occur in suburban areas, or more remote places, that urban areas, such as the city centre shown here could also be host to horror stories. There are four different stories here all taken place over one night. In one a young girl sees a post on her social media feed of a spooky girl (Gianna Jacobs - Night) with a warning that if she doesn't share the post she will die. In another a young thief encounters a silent masked man who begins a relentless pursuit. The third story has a girl house sitting, who has been warned not to open a certain door in the basement. Curiosity getting the better of her she accidentally releases a psychotic doll. Finally these dangers from the different stories all come together for one poor soul. 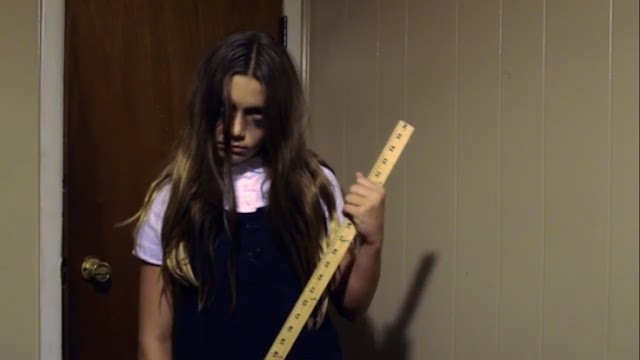 So there are several different ways to show an anthology, the main ones being either to have a wraparound story (Weird Fiction), or to have interconnected stories (Trick 'r Treat). I find the later much more involving when done correctly and so it was nice to see that implemented here. There was nice overlap with the next story following on chronologically from the previous one and often including mild interaction, such as a character witnessing the end of the previous story, or getting contacted in some way. The masked killer for instance with the exception of the short prologue story manages to appear in some form or another in each of the tales, with the other perils also getting cleverly inserted in ways that don't seem obvious to begin with.

Onto the actual horror then. This has been described as a comedy horror which is a good fit for this due to how the characters act. The house sitter in the third story for instance seems to get more and more annoyed with all the weird stuff going on with some cliche lines adding fun to her situation. Such as when she has locked herself in the bathroom to escape the crazed looking doll and says something along the lines of "I'm not getting paid enough for this!". Then you have the threats themselves. The spooky little girl ghost is representative of films like The Ring and The Grudge, but here she is armed with a metre ruler and is more irritating to the people she haunts than anything else. The doll reminded me of the leprechaun from the Leprechaun series in the manic way it talks. The effects for it were not high quality, with the camera often very close to it to give the illusion of it moving on its own. You know what though? I would take that any day of the week over the bland non-moving doll you get in the Annabelle films. Then there is the masked killer who obviously represents slashers, and so of course is armed with a knife. There are minor special effects used, but they work well enough, I always liked the shots of walls getting splashed with blood, even if the victims often seem unperturbed by the violence inflicted on them. 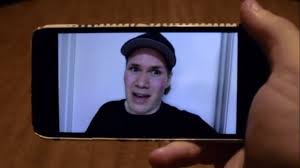 Urban Fears felt like a more ambitious film than Night, with a much larger cast and more going on. At times it did feel a little bit padded though. The early part of the second story had a thief going house to house rooting through drawers looking for loot for instance. This went on much longer than I felt it needed to. Then I had a minor issue with the final story in that it concerns a young man sitting at a table in an empty room at four in the morning, seemingly doing absolutely nothing. I felt it would have been more believable if he had a reason why he was sat there rather than doing anything at all.

I quite enjoyed my time with Urban Fears, sure it is rough around the edges, but I did like how the stories were connected, and the cheeky inclusion of a clip from Night played on a TV (that works due to that film being found footage). For subject matter alone I enjoyed this one more, though it was altogether a more competently made movie. Urban Fears is due to be shown in the Landmark's Ritz Five movie theatre on 30th September in Philadelphia, tickets can be brought here. Also it may be shown at a few film festivals later this year, and is coming to Amazon Prime Video this Autumn.