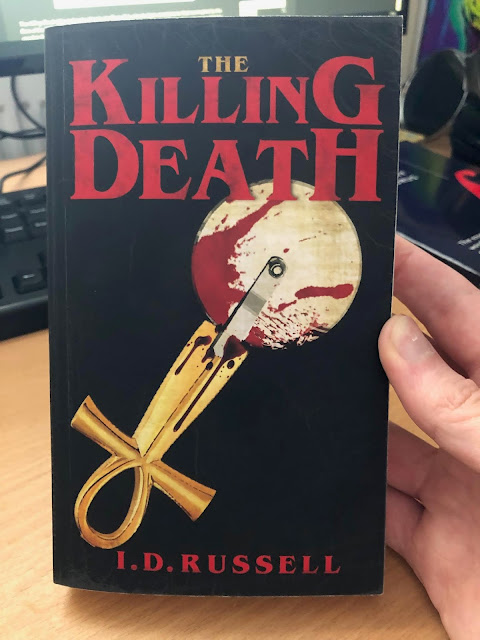 A few months ago, back in June I reviewed Ian Russell's indie comedy horror/crime film The Killing Death, and mentioned in the review that there had been a book written. Well since then I have now read that book which serves both as a novelisation of the movie, as well as a sequel to that story all rolled into one. I nearly always say this when reviewing books - I'm not great at reviewing books! I shall try my best though.

Roughly half of The Killing Death follows the events of the film. There is a serial killer loose in River City, one whose M.O is collecting a different body part from each of his victims. By the start of the book this killer has been captured with recollections by both the killer, and the detective duo, consisting of seasoned Frank Malone, and rookie Jimmy Hooper showing how he came to be captured. The second half of the novel takes place after this with a new and even more dangerous foe for the men to battle against.

It's hard to talk about the story too much as there is quite a nice twist in the middle which completely changes the tone of the story. If the first part was an indie horror (as it indeed was) the second half feels more like a Hollywood blockbuster in terms of the sheer scope of it. I wondered how the novel would expand on the characters and it actually does cure some of the issues from the film. With Chicago Phil in particular you get a lot more insight into what he is hoping to achieve, as well as getting backstory that led him to become who he was, whether justified or not. This was all good as he never really got much opportunity in the film to be a more rounded character. What I also liked was how the jokes got ported over. In particular there was a moment in the film where I felt the comedy didn't work, a silly scene that was like something out of Scooby-Doo as characters opened and closed doors in a hallway, appearing in different places each time. Here that same scene becomes hilarious due to the bewildered thoughts of Jimmy as he is experiencing this. This isn't transposed verbatim from the film, with some of the more amusing dialogue exchanges missing, but there is of course a lot added. Again there are some moments that don't work too well, an early part involving a rerun of Jeopardy was more confusing than amusing as one example.

The Killing Death is an easy read, and also written in a style that I enjoyed. Not too surprising that this was decent as it turns out as well as director Ian Russell is also an author. He said that due to being published ten years after his film that he was able to expand what was on screen, and with this he was successful. Both parts of the book were enjoyable, though there is a definite shift at the halfway mark that makes it almost seem like two separate stories featuring the same characters rather than one whole. That isn't necessarily a bad thing though, it was fun seeing what happened after the film ends. The humour is reduced a little in the second part but there are still funny moments, and I did like the shift from crime novel to something a little bit more supernatural feeling.

I thought the film The Killing Death was a fun watch, but the book adaptation is even better. With a clear easy way of writing this was something I frequently couldn't put down. It does build on the ideas of the film, while the new stuff is nearly as strong. A book I would recommend even if you haven't seen the film.