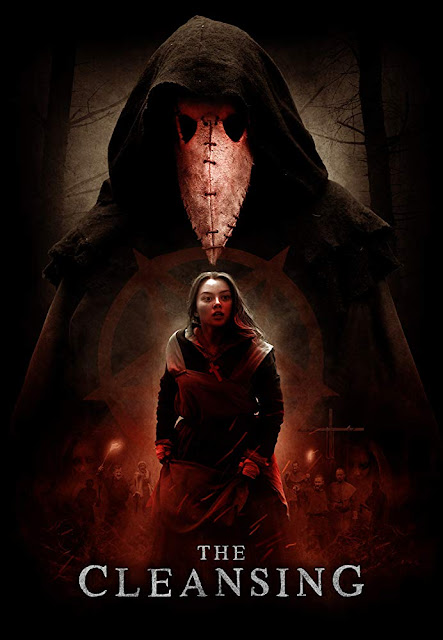 The Cleansing is a U.K made horror from director Antony Smith, that almost felt like an indie version of The VVitch: A New England Folktale. Like that movie this is a period piece that has the central idea of witchcraft, and like that one this can also be a bit of a slow burn.

Set in 14th century Wales this follows a teenage girl named Alice (Rebecca Acock - The Watcher in the Woods) whose small village is suffering from the effects of a plague sweeping the land. After her mother gets the disease and is killed by a plague doctor in order to prevent the spread, the village preacher/leader - Tom (Rhys Meredith - Apostle, Don't Let Him In) offers for Alice to come live with him, as he secretly desires the girl. However, after spurning his advances Tom convinces the villagers that she is a witch, and the person responsible for causing the all the illness. Fleeing, she is taken in by a herbalist living deep in the woods - James (Simon Pengelly - Being Human), who decides to teach her about natural medicine. 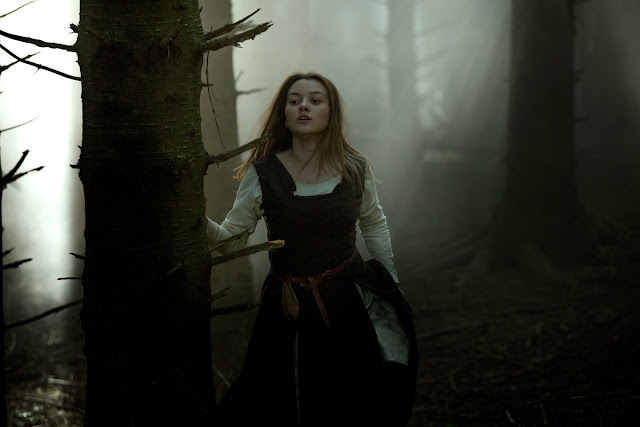 While I didn't mind this it does take a bit to get going. A big distraction for me for a while was that Alice barely speaks at all. I find the idea of a silent protagonist to be an interesting one, but it led to some moments of frustration, especially in the first third. This first third has the girl being tortured at the hands of the priest and his cronies, their aim seemingly to be just to get her to talk. I never really understood why she refused their pretty simple requests, though it is only much later that you actually do discover just why she won't talk. Then there is the middle section with her growing friendship with James which was the most grounded part, it features as its centrepoint a hallucinogenic dream sequence that tries to pull the story towards its final third. Here, all the promises of horror come to fruitiation. Having spent two thirds of the film in relatively sedate surroundings it was nice to see the action pick up in a slightly over dramatic finale.

I liked the central idea of if Alice was actually a witch as it was suggested or not. Due to her silence it was hard to ever really get any sort of idea of just who she was. There is a whole lot of not much really going on, but despite limited sets there was a good feeling of this being authentic to the time period. A lot of the film takes place in and around James's house with a sparse, yet competent set design. There were some elements of the story which I never saw the importance of, such as a stranger appearing at the house for a few scenes, but didn't really seem to have much point for even being in the movie. A lot of the middle felt a bit meandering. Acock was a decent lead, it would have been better if she had gotten more chance to speak more. The other characters are ok enough but they did kind of blur into one with no one aside from James, and antagonist Tom having much to their character. Even then, Tom's defining characteristic is that he is a cowardly hypocrite so didn't feel like there was much to him.

There was a feeling of joylessness throughout. The world here is a bleak place so this makes sense, but the film as a whole felt a bit bland at times. I wouldn't say I was ever bored, but at the same time sometimes it felt like the various components didn't really fit together that well. By the time the last third roles around this became the revenge thriller it always felt like it was going to be and was all the better for it. There were a few moments of horror here, and some nice twists. Sure some of these twists were super obvious but they still satisfied.

The Cleansing was a film I found it hard to get too excited about. While it is much less well made then The VVitch I had just about as much enjoyment with this as with that one. I'm really glad it gets to where it looked like it was aiming to go, I just wish it had gotten there sooner. With better characterisation this would have benefited, as it is it has its moments. The Cleansing is released by High Fliers Films.

You nailed it! The movie indeed suffered a lot of loose ends. Foremost of which was the stranger/trader that appeared from nowhere and simply vanished to nowhere. You're right again. His presence had no import in the story. With much difficulty in finding a drop of plausible reasible reason out of it, I figured out that perhaps the director simply wanted to convey that the disease came overseas through these traders. The ominous cleanser himself had the disease. He, too, was a sea farer/trader. Overall, the movie flunked miserably.

What you say makes sense with that character in particular, but yes, he wasn't fitted in to the overall story that well.