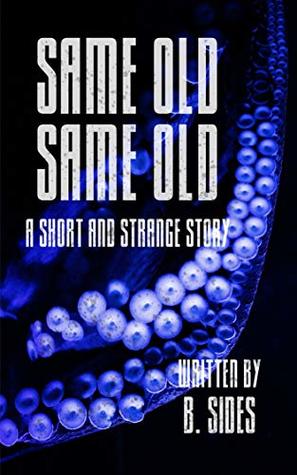 This is a two fold 'forgive me' introduction. Firstly I wrote my notes for this review while on a lunch break at my day job so they are kinda hard to decipher. Secondly, as always I'm not that great at writing book reviews. Now as far as I'm aware B.Sides novella, Same Old, Same Old: A Short and Strange Story is the first short story I have reviewed on my blog.

Terry works for a local children's centre and due to constant financial difficulties he is always out in his neighbourhood going door to door looking for handouts. One dark and rainy night, looking to get his donation collecting over with quickly he chooses the nearby poor Shady Oaks apartment complex rather than heading to a more affluent part of town. While there he discovers an apartment that has its door wide open. Curiosity getting the better of him he enters, and sees something most unexpected.

I went headfirst into this book and so managed to miss the fact it was only eighty pages long. It is a good thing then that this is a well rounded story that was well written, and so descriptive that even now some days after reading it I can picture in my mind the apartment complex Terry finds himself in. I love the rain and it usually adds to anything it appears in. Here is no different. The minor twist here is that it is basically Lovecraftian horror blended with comedy. I liked how there was a transition from a feeling of horror, with Terry ending up trapped inside a closet, hiding from the owner of the apartment, to a much more humorous piece that changed tracks with the arrival of a spatula.

The pacing of Same Old, Same Old was tight enough that I was kept involved from beginning to end. Even with the arrival of a more light hearted tone I was still a bit unsure how it would all turn out. The interactions between the various characters, and the inner monologue of Terry led to some funny, as well as tense moments. H.P Lovecraft is the writer of the most genuinely scary stories out there, so I will always have time for anything that incorporates his mythos of ancient Gods. From beginning to end this flowed along at an enjoyable pace with there being nothing that felt unneeded. I found myself really quite enjoying Same Old, Same Old, worth a read.